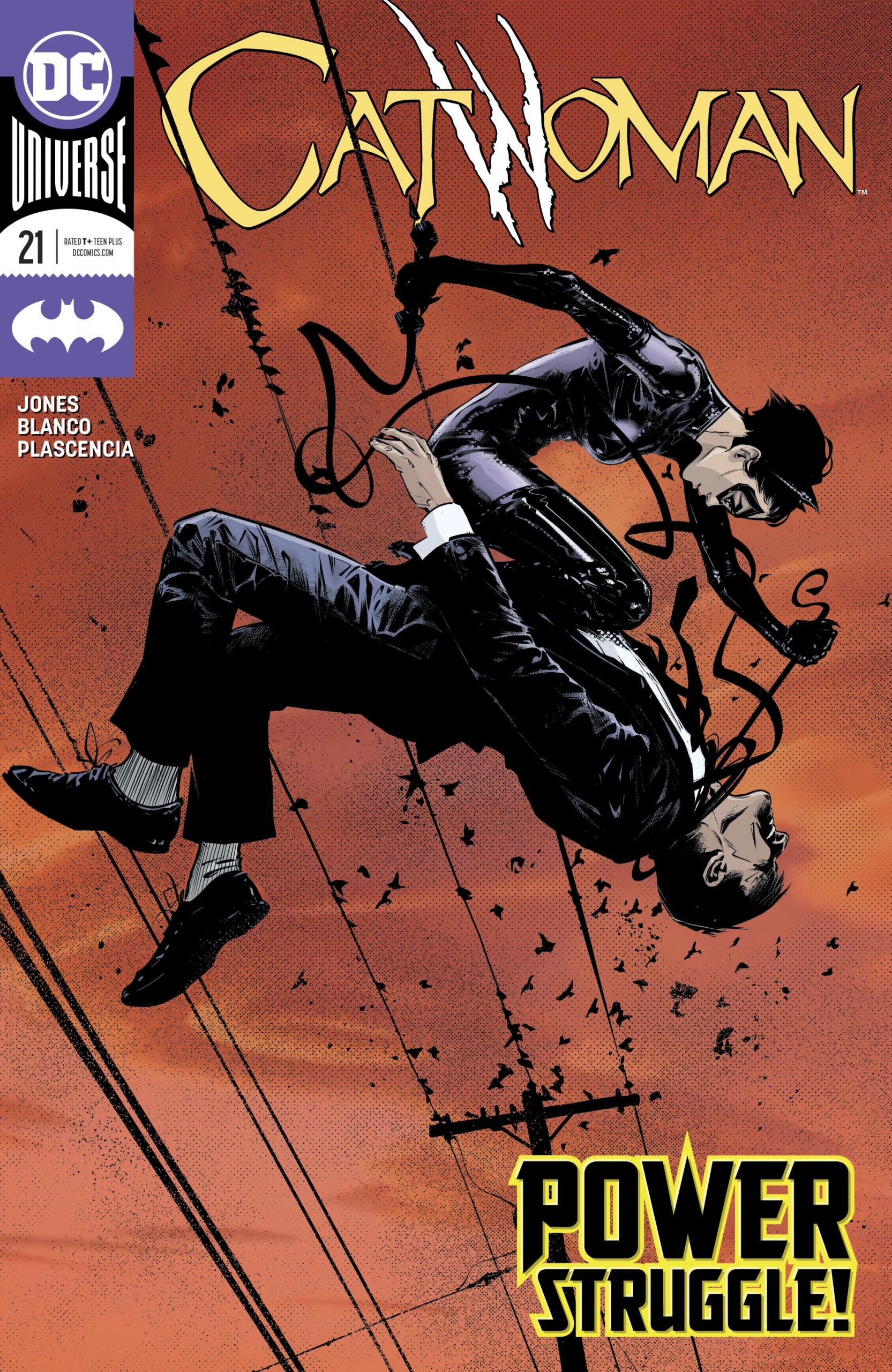 Overview: Catwoman concludes her business with Raina Creel and with Villa Hermosa.

Synopsis (spoilers ahead):  The issue opens with Selina’s assault on Creel’s mansion.  As she plows through the zombies, Linda seems to be having a medical issue elsewhere at the hospital.  Catwoman fights through the zombies and reflects on the path her life has taken recently.  Her progress infuriates Raina.  A few zombies from Raina’s personal guard make a desperate effort at taking down Catwoman but it fails.  Raina tries to take on Catwoman herself, but Catwoman easily subdues her.

While Raina is at her mercy, Catwoman tells Raina the story about how her personal identity has evolved over the years and asks Raina if she can live with herself.  As she asks this, the zombie version of Raina’s son kills Raina, points at the Lazarus water and tells Catwoman to make things right.

Back at the hospital, Carlos rushes to Mrs. Ayala’s room where she appears to have fully recovered.  He looks under her window and finds a gift and note from Catwoman.  The note is basically Selina saying goodbye because she feels her place is elsewhere.

Out on a highway, Selina and her sister bond over a song as they make their way to Gotham City.

Analysis:  For an issue that was about the end of Selina’s time in Villa Hermosa, it all seemed to end rather abruptly.  The physical confrontation with Raina takes up most of the issue and with Selina skipping town right afterward, it doesn’t appear that we will see any of the fallout from the events of that night.

Some parts of this issue are a little tough to judge because they work well on their own but don’t work at all in the context of the larger story.  I’ve already mentioned the fight occupying most of the space within this issue, the fight choreography is very well done and the art is sufficiently gritty, but the fight itself is repetitive and the banter has no energy.  I can’t help but feel completely underwhelmed by the formulaic conclusion.  I understand Selina leaving Villa Hermosa, but she leaves her Villa Hermosa supporting cast in what I feel like is a very selfish way which doesn’t really fit with how she has evolved as a person recently.

The one thing I really, really liked about this issue is when Selina gets introspective about her past and talks about how she became who she is today.  It’s a very powerful and moving anecdote and gives readers hope for her long-term happiness and relationship with Bruce.  The only problem here is that it comes at a truly bizarre moment in the story.  There’s no reason for Selina to tell Raina something that personal in that particular moment.  The only purpose it serves within the story is to give Adam time to kill Raina which also keeps Selina’s hands clean.

Going forward, there will be a new creative team coming on board to this title and Selina will be in for new adventures in Gotham City.  She took her sister Maggie along with her so it’s likely she will be a supporting character in subsequent stories.

Final Thoughts:  An anti-climactic finish to the Villa Hermosa era with a few bright spots.

The Contested Sexuality of Batman Part One: Batman’s...