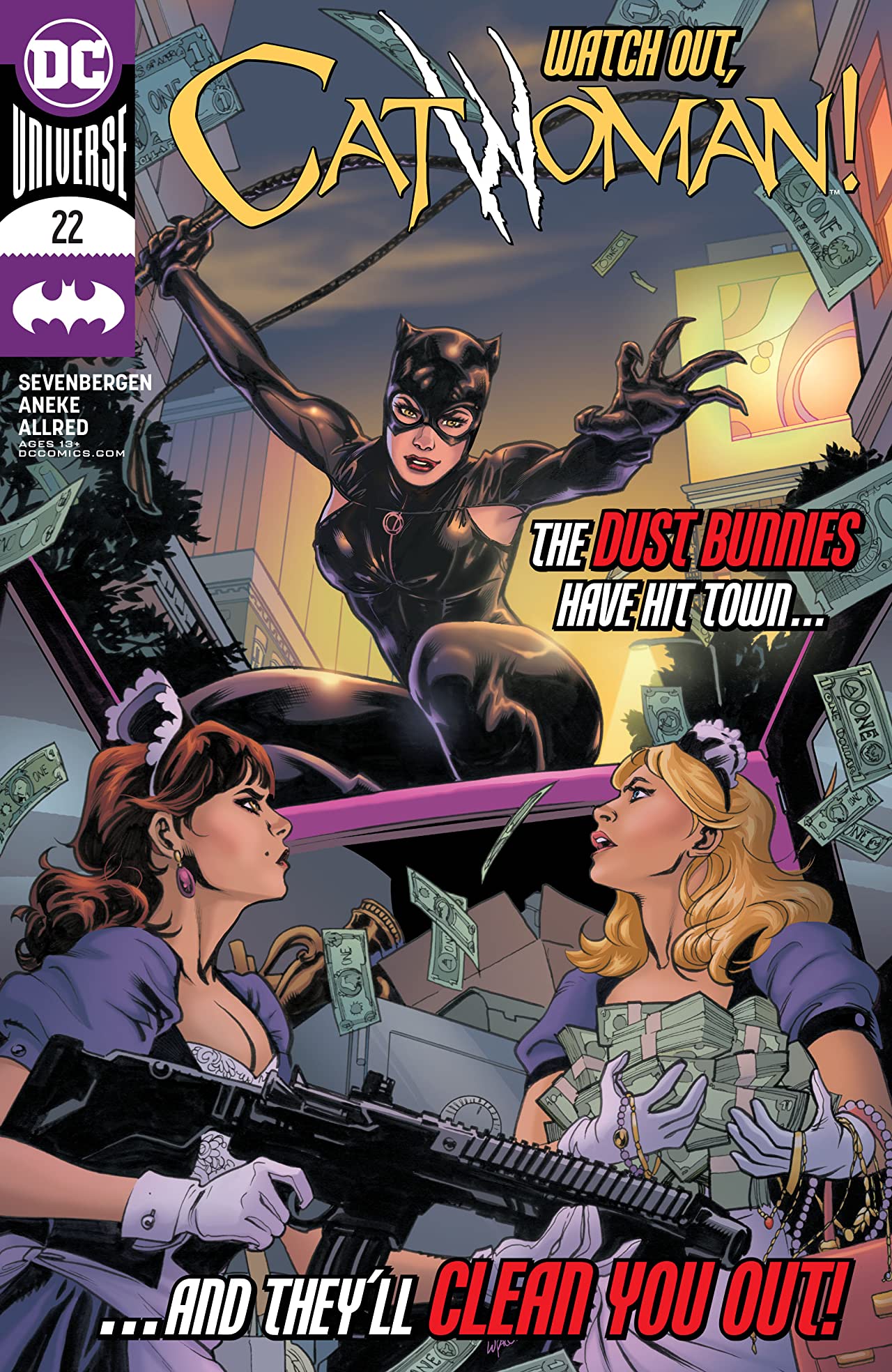 Overview: In a flashback issue, Selina deals with a gang of sexy maids.

Synopsis (spoilers ahead): Before the last issue, Selina goes after a gang of “sexy maids” for complicated reasons – her police associate wants help, she doesn’t like the competition, and she wants to steal back some things from their targets herself. She sneaks into their latest heist mid-operation, finding one of them distracting the owner with sexy-time shenanigans. Giving chase, Catwoman is temporarily stymied by the gang’s use of slippery polish.

Meeting with her police associate, who makes fun of her failure, Selina resolves to ignore his order to let the professionals handle the Dust Bunny Gang. At their next target house, they attempt to recruit Selina, but she rejects them, fights, and is knocked out with a spray can full of mind sanitizer, a knockout gas/memory eraser.

In their van, the Bunnies plot what to do with Selina, but she wakes up and uses her whip to crash the van. She beats the trio, and they attempt to claim to be like her. Still, Selina turns them in. She also reveals to her cop associate that she knows he was helping the Dust “Busties” and swings off into the sunset.

Analysis: Catwoman, already a book with serious issues connecting to what its eponymous character is doing in other books (particularly Batman), decides to go full filler arc until the new creative team of Ram V and Fernando Blanco take over in this September.

Writer Paula Sevenbergen, a creator who has contributed to other parts of the Warner Brothers media empire, such as Mad Magazine and the new Stargirl television series, pens this issue, which takes place before issue #21 per an editor’s note, alongside guest artist Aneke. Though the dialogue and pencilling are suitably polished for one of DC’s marquee characters, the storytelling is often extremely lazy (Selina’s lack of real restraint by the Dust Bunnies is beyond James Bond supervillain idiotic), and the villains are not only used in a very salacious and often uncomfortable way, but given no real development or motivation. They seem to exist primarily to provide titillation, which is a disappointment. Selina’s character is reasonably fun, though like the creative team, she seems to be phoning it in.

The ending reveal that the condescending cop was corrupt all along lands with a thud rather than a bang, and Selina’s response of dusting her hands of the whole matter makes me wonder why the story needed to be told at all. The annual featuring Selina training a bunch of young characters may be a filler arc, but it was much better told, making you care about Selina and the other characters.

Emanuela Lupacchino provides the main cover – she’s doing a LOT this week, with a story in the Catwoman 80th special, this cover, and the Black Label Birds of Prey book. A fun Catwoman vs. robber maids scenario fills this image, very reminiscent of the Dodson’s work. Julian Totino Tedesco provides a cheerful variant, showing Selina jumping sideways off a fire escape surrounded by cats, laughing gleefully. Both provide pretty good value for money as covers go, a nice option for any buyer.

Final Thoughts: A forgettable story with decent art that manages to avoid anything of real substance or get much fun out of a “Catwoman fights sexy maids” concept.