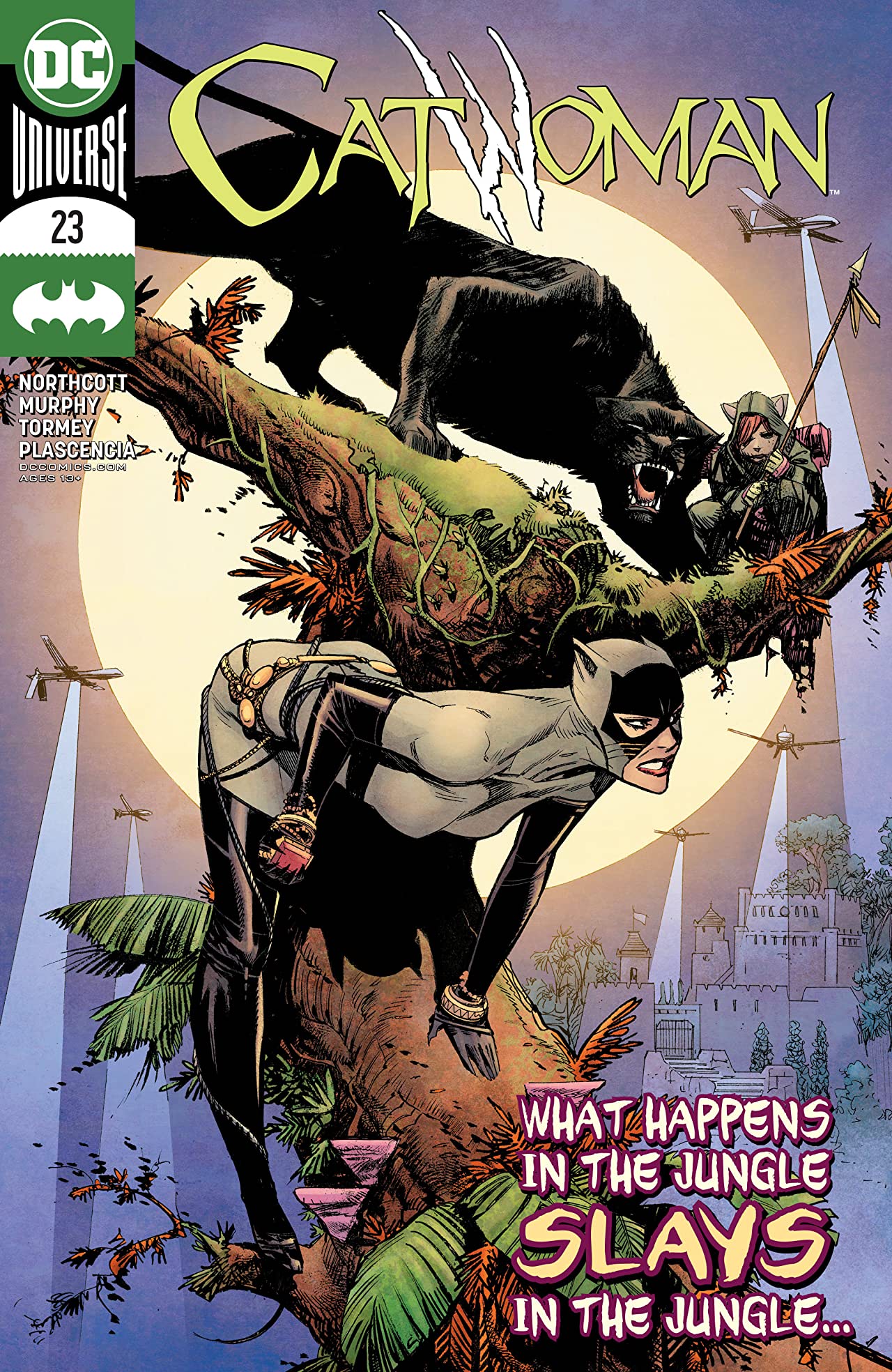 Overview: Selina travels to a far-off island in the hopes of landing a big prize. As always, her ambitions could get her killed.

Synopsis (spoilers ahead): On the island of Isla Nevada, two gunmen chase a young girl through the jungle. As they catch her and prepare to teach her a lesson for not meeting their boss’ requirements, a giant panther attacks them and viciously kills them both, leaving the scared young girl alone…

At the airport, Selina Kyle is warned of what awaits on Isla Nevada, but she remains confident in her ability to take care of herself. As she settles in for the long flight, a native of the island recognizes her and sparks a conversation about the island’s urban legend – Kisin – the god of death.

On the island, Selina is greeted by a group of kids looking to give her some flowers. As she entertains their gestures of “kindness,” one of them – the young girl who was chased through the jungle – attempts to pick her pocket. Selina catches her in the act, however, and while giving her some cash for her efforts and gives her some tips on pick-pocketing.

Suddenly, a red sports car pulls up and out jumps Selina’s “chauffeur” Snowflame. He welcomes her with open arms and drives her to his home in the mountains. While en route they talk about the past, including his presumed death. Snowflame tries to determine Selina’s true intention for attending his auction. She says that she’s only there for business.

At a pre-auction gala, the worst of the worse, including the likes of Professor Pyg and Clock King, mingle among each other. Selina is approached by Tambra Quartz, an Instagram-type queenpin, whose cult of followers believe every word she says. She’s determined to win the huge diamond that is being auctioned off tomorrow and warns Selina to back off. Selina ensures her that she has no interest in the diamond. That could only mean, Quartz theorizes, that she’s there for one thing – the List.

As Selina begins to reject Quartz’s assumptions, they’re interrupted by some taps on a glass as Snowflame appears on stage, welcoming his guests to Isla Nevada. He begins to discuss all of the extravagant items that will be for auction tomorrow, including the List. Before he could continue, he’s interrupted by a guard, who tells him something needed his attention. He quickly leaves the stage but not without Selina’s notice.

In the jungle, guards are hunting the giant panther that has been plaguing them. They catch sight of it and as one fires upon it, Catwoman springs into action and takes them out. Unfortunately, it was not before one of them shoots the cat, who now lays dead near the spring. As she approaches it, the giant cat awakens and begins to approach a now-trapped Catwoman. Before it attacks, Selina is hit with a drug-tipped spear. As she loses consciousness, the young girl from the airport appears with the cat behind. She warns Selina that she should have followed her own advice.

Analysis: In the second inventory issue released until Ram V takes the reigns of Catwoman with issue #25, we get the first part of a two-issue arc that brings some nostalgia as well as the introduction of a new “villain.” It has been a while since we have seen Snowflame. In fact, the cocaine-snorting, cocaine-powered villain hasn’t been seen since his presumed death back in the old New Guardians series in the late 80s (I admit I never heard of him). His “snow island” appears to be near Colombia if we are to follow his very short history. The actual “Isla Nevada” lies off the coast of Antarctica (yes, I actually looked this all up; don’t judge me) where even with today’s global warming can’t sustain the drug market. We are also introduced to a new rogue – Tambra Quartz.

It’s uncertain when and where Murphy’s and Northcott’s story takes place. We’re presented that it is now, but there are some things conflicting about this, particularly with Selina in a different costume (a nice throwback to BTAS though). This might be due to Murphy’s fascination with Batman: The Animated Series, much like his work in the White Knight universe. Unless I’m wrong, this is Blake Northcott’s first time doing a title at DC, but I am familiar with her work in the indies, particularly the Executive Assistant: Iris series from Aspen Comics.

How does this team work out with Catwoman? It’s tough to say for sure until the conclusion of the story, but what I can advise is to not read this thinking you’ll get any resemblance to Murphy’s work on White Knight. You won’t. As with much of the Catwoman series, Selina is all over the place and this takes away from the character. The story isn’t bad (it was far worse after a first read), but after more than twenty issues of clunkiness, I am ready for a cohesive story, and I know I won’t get it with this and the next issue. It’s unfortunate that this has been the story of Catwoman since the beginning of Jones’ run.

What can be expected from this adventure? Is it the List or something else? Initially, I thought this list was a part of the dossier from issue #14 (and some continuity), but after re-reading that issue, it’s not the case. Obviously, we’ll be seeing more of Kisin next issue. Perhaps there is more to this huge panther than originally let on. I do hope, however, that this arc will be the last time we see the like of Snowflame again. The concept of this character has no place on comic pages, considering today’s climate with substance abuse.

Tormey’s and Plascencia’s artwork is ok. Initially, I thought they were attempting to put their own spin on Murphy’s style of art, but there are certain panels that are clearly their own. Plascencia’s colors, however, most definitely have a Matt Hollingsworth tone to it. It isn’t bad. But it’s not special either.

Final Thoughts: Issue #25 can’t get here quick enough. Catwoman has been lost in its own world from the start, despite it being a spin-off from Tom King’s Batman run. It needs some true cohesion that hopefully, its inclusion in the Joker War will bring.