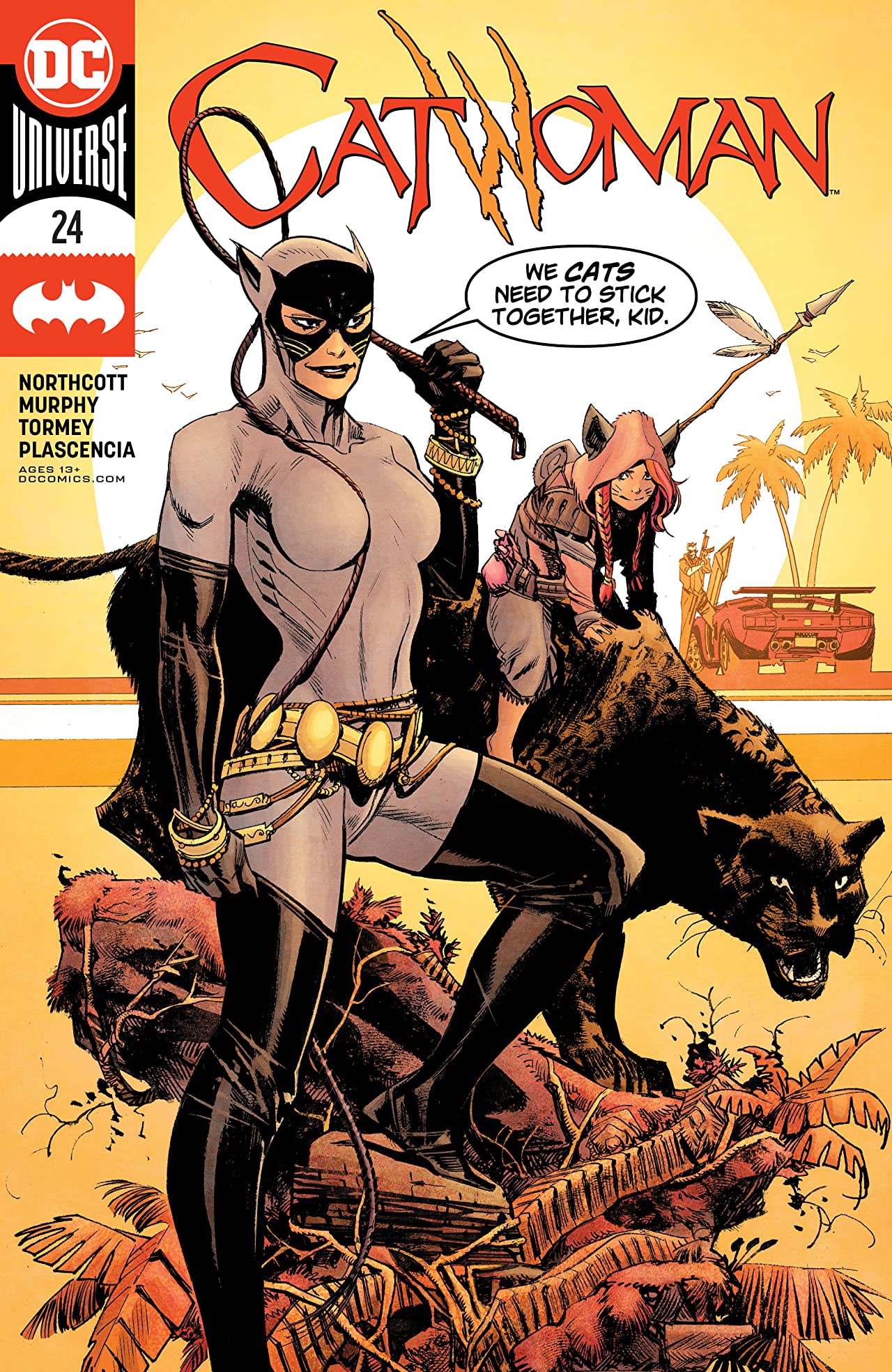 Overview: Selina finds herself deciding whether to continue with her self-satisfying mission or to help a small village trapped by a cocaine-powered drug lord.

Synopsis (spoilers ahead): Selina struggles to stand as she’s surrounded by the large black panther, Kisin, and the young girl she saved at the Isla Nevada airport, who accuses her of being in partnership with Snowflame. The girl tells her that the spear she stabbed Catwoman with was laced with a paralytic toxin. Selina grabs her whip and attempts to escape, but is stopped. Selina, near paralysis, says she was only looking to steal a diamond. The young girl is hesitant, but her protector believes Selina and as a result, she is given an antidote before following the two out of the jungle.

The next morning, Selina awakes and meets Angelica’s – the young girl – mother, Liseth. She explains to Selina that she survived Kisin, because the feline god looked into her soul and saw her true intentions; she was not there to do them harm. She tells the history of Isla Nevada and how it fell victim to Snowflame’s treachery. Like Kisin, Liseth doesn’t believe Selina is there by coincidence, despite Selina’s doubts. Selina knows that Snowflame will be coming to look for her and Kisin. But she believes they have the best chance to take Snowflame down because he’s preoccupied with his high stakes auction.

At Snowflame’s castle, Tambra Quartz has just won the diamond she sought. To Snowflame’s surprise, she isn’t happy about her victory. She wanted Selina to witness her victory; she wanted to rub it in her face. Suddenly, the lights go out to the entire castle. Guards are unable to find the guards protecting the castle’s generators, finding only a hand holding a walkie talkie. Suddenly, Kisin appears in the castle’s ballroom, causing the auction’s attendees to scatter. Snowflame, however, continues to try to sell items. No one is having it. Snowflame then realizes that with the power out and no generators, the electromagnetic seal that was protecting his office was gone. He knows that Catwoman has struck and immediately sends guards to the office as he tries to reach her by phone.

In Snowflame’s office, Catwoman is downloading the contents of the infamous list to her phone. Two guards burst through the doors, but Selina is gone before they could hit her with gunfire. Unfortunately, they destroy Snowflame’s computer, which contained that data. This infuriates Snowflame, who berates his guards for their inability to catch one person. He turns and finds himself face to face with his old friend, who has dispatched his last guard.

After taking a hit of his personal stash of cocaine, Snowflame battles it out with Catwoman. He eventually gets the upper hand after Selina appears to be overtaken by the drug-induced pheromones coming from her opponent. As he moves in for the final kill, Catwoman blows the green powder that cured her earlier into Snowflame face. This doesn’t phase him, but it does allow Selina time to get in one last kick, breaking Snowflame’s nose. As the infuriated drug dealer goes after Selina, Angelica hits him in the leg with the same paralytic-laced spear that took Catwoman down. Unable to move, Catwoman and Angelica leave Snowflame at the mercy of Kisin.

Days later, Tambra Quartz is home looking to get her newly-won diamond appraised. She is shocked to find that the item in her possession is worthless. Catwoman has made the switch, taking the diamond. However, she hasn’t taken the diamond for herself. She’s left it to the people of Isla Nevada.

Back in Gotham, Selina looks over the list stolen from Snowflame. She sees that the list was compiled by the Wayne Foundation. Is she on the list? And if so, what does this mean about her relationship with Bruce Wayne…?

Analysis: With this issue, we have reached a milestone in this series. We now get to the end of an of a title that has been so cut off from the series it spun off from. Throughout its twenty-four issues, save a few pages here and there, Catwoman has mentioned nothing of Selina’s ties to Bruce and the events that lead her away from Gotham and to the streets of Villa Hermosa. The disjointedness from the greater Batman Universe has made Catwoman difficult to read. Even writing the analysis of this review was a somewhat difficult task as it isn’t much different from the last issue’s review.

That being said, this issue, much like the previous one, was a decent read. It wasn’t great, but it wasn’t terrible either. It did what it was meant to do: fill in with a story until a new permanent creative team takes over. Northcott and Murphy provide a decent old-style Catwoman story presenting Selina as the anti-hero she’s been known as much of her recent history. There was a decent mix of dialogue and action as you get to the end of the issue. The transitions between each act of the issue were also done well as all the loose ends from the issue, as well as the last issue, are tied up and completed. One loose end left untied, however, is the consequence of Catwoman presumably being on the list that Wayne Enterprises (i.e., Bruce Wayne, i.e., Batman) has put together. I feel it’s ultimately negligible as this story definitely seems to take place prior to what we’re currently getting in Batman and Jones’ run on Catwoman.

As someone who has followed Northcott on several indie runs, I would be interested to see how she handles a current DC character on her own.

Much like the last issue, the art was just ok. It did a good job of complimenting the dialogue, particularly near the end as the final battle between Catwoman and Snowflame took place.

Final Thoughts: So Selina is now back in Gotham (as seen in the Catwoman 80th Special) and next month’s issue #25 brings us a new creative team responsible for bringing Catwoman through Joker War and beyond. While I have serious questions about the gaping holes between Villa Hermosa and the return to Gotham, I am cautiously optimistic that Ram V will bring us a good story that will now fit into the events of Joker War and the greater Batman Universe. Let’s see where things go…