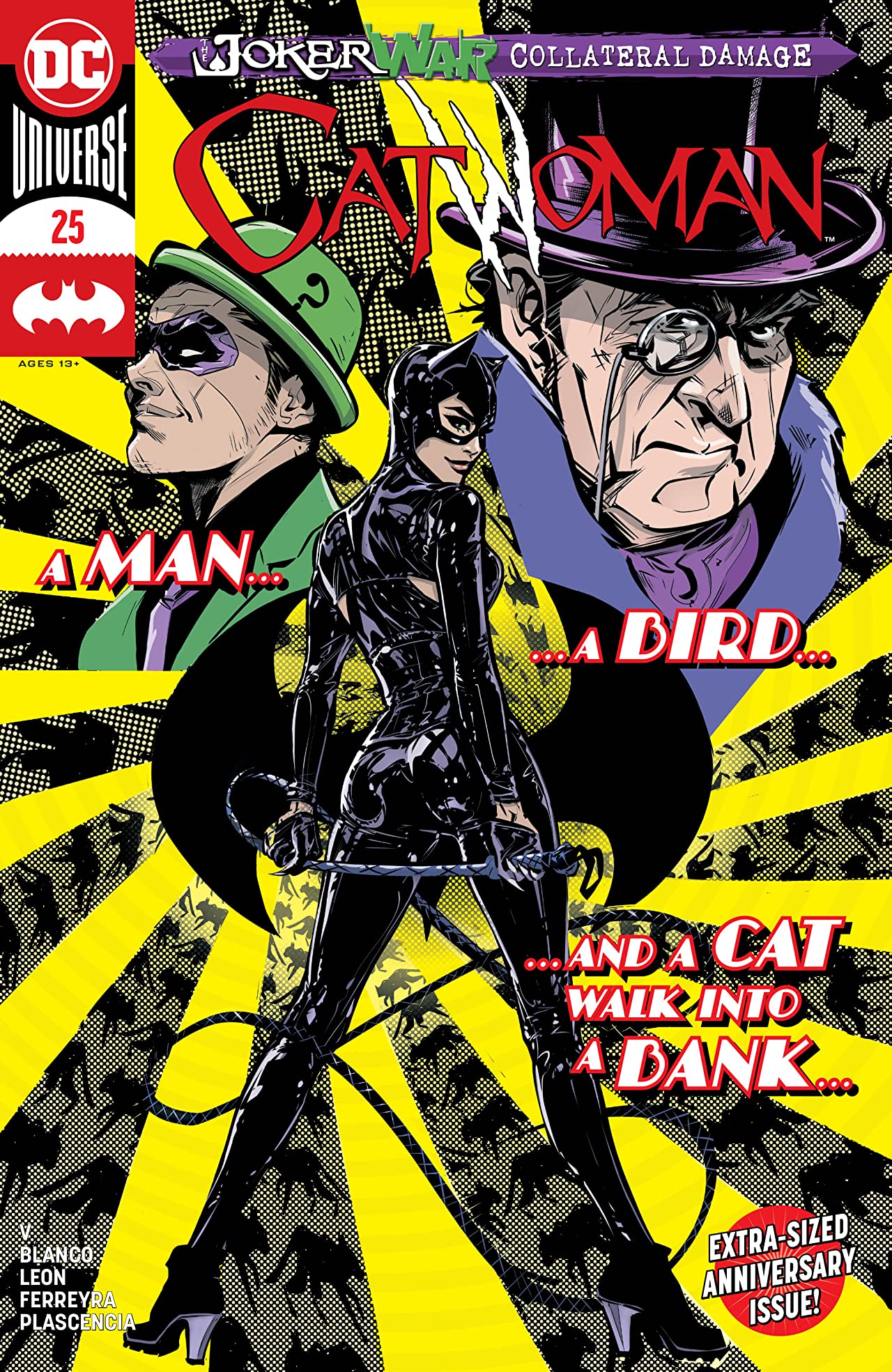 Overview: Catwoman’s return to Gotham causes huge waves in the underworld, both for supervillains and small-time crooks, as the Joker War continues to cause “collateral damage.”

Synopsis (spoilers ahead): “Duende” – In her mind, Catwoman faces a roaring tiger, as she executes the heist she started in Batman #98, dancing through a laser field. Riddler runs the operations van, as Catwoman gets to an access point in the Underbroker’s server stacks.

On the rooftop outside, Penguin and his bodyguards open fire on Joker’s clown goons in the street below.

As Riddler finishes the transaction in the van, Selina pulls a last-minute switch, sending the money to a different account than the Riddler’s. Eddie, having anticipated this betrayal, locks all the doors and turns on all the alarms so Selina will be caught – including flashing his question mark symbol on all screens. However, Selina knew he would do this, so she altered the blueprints she gave him, giving herself another exit, and leaving Riddler looking guilty to Underbroker and the Joker, having flashed his symbol all over the building. As Catwoman gets outside, Penguin confronts her, having also anticipated her betrayal, and shoots her in the side as a warning. A car crashes into Penguin and his guard, turning out to be Selina’s police friend, Hadley, from Villa Hermosa, coming in for a last-minute rescue.

She wakes up ten hours later, and Detective Hadley says he came after her to arrest her but decided to save her when he saw what she was up against. She disappears, leaving him a note saying thanks.

Selina sneaks into Luke Fox’s care disguised as his driver and tells him she gave his accounts all of the Wayne Enterprises money Joker stole, as well as most of the criminal’s money, and asks him to restore Wayne Enterprises, then distribute the rest to the poor of Gotham. She proceeds to jump off a bridge as Catwoman, getting back into action.

“Return to Alleytown” – Catwoman walks through her old haunts of Alleytown, getting mugged by a gang of three petty thieves, but they soon discover they’ve tried to rob the wrong woman, as she steals from them instead, takes away their weapons, and makes it clear they work for her now.

“Cat vs. Woman” – An alley cat observes Selina as she moves into Alleytown and concludes that this human is almost as good as a cat.

Analysis: After writing three fill-in stories during Joelle Jones’s run (and a tie-in story for the Catwoman 80th Anniversary special), Ram V takes over the main writing duties for Catwoman with this extra-sized twenty-fifth issue, writing the twenty-two-page main story tying into Joker War and two backup stories dealing with Catwoman’s long-awaited return to Gotham. He’s been seeding elements in all of his stories so far, and it’s nice seeing that kind of planning for the potential future. The two backup stories, particularly “Return to Alleytown”, evidence more of this kind of careful planning. Just as Scott Snyder took James Tynion IV under his wing as a backup writer and student, working with Tynion to create story hooks that could be spun out into series and ideas on his own, Tynion has been working with Ram V on Justice League Dark and Catwoman. And that kind of close, working relationship pays off in some of the tightest inter-title connections we’ve seen in a long time – Ram pays off multiple story setups from Batgirl and Batman in this issue, and does so much more carefully than Jurgens was able to manage between Batgirl and Nightwing last week.

There are a few writing hiccups – the tiger dream sequences/symbolic imaginations/hallucinations by Selina are unnecessary and feel a bit like Ram is trying to fill space for the anniversary issue. However, the delights of the issue greatly outweigh these drawbacks. Not only does it tell a fun heist story with Selina in her element and solid characterization all around, but it also sets up the status quo hinted at in Ram’s 80th Anniversary story with the first backup – Catwoman building her own network of agents again – and has sheer amusement and cuteness with the second story from a cat’s perspective.

The art, by three different artists – Fernando Blanco on the main story, John Paul Leon and Juan Ferreyra on the backups – is largely well integrated. Though each artist has their own style, they are not radically different from each other, and colorist FCO Plascencia provides the linking palette between each one (similar to how colorist Jeromy Cox helped link the various styles on the Deathstroke book by Christopher Priest). Fernando Blanco, the continuing series artist on the book since Jones stopped being the main artist, continues to turn in impressive, clean-lined, and dynamic work and Leon and Ferreyra turn in really delightful work in their backups, the former doing a great job of capturing the chaos and quiet despair of Alleytown, and the latter giving energy, humor, and sexiness to the story of a cat vs. Selina.

The main cover, by continuing series cover artist Jones, is bright, colorful, and features a sexy Catwoman looking over her shoulder at us, with looming Penguin and Riddler in the background, nicely mirroring the main story. The card stock extra dollar cost variant, by Lee Bermejo, depicts Catwoman heading out a window, rendered in Bermejo’s trademarked hyper-realistic style. Both are quite nice, and it’s good to see Jones providing some continuity in the series finally transitioning to a new creative run, instead of the past several issues of fill-in disruption.

Final Thoughts: Ram V finally gets his chance to write the main story of Catwoman, and though there are a few spots of concern, it’s very promising!