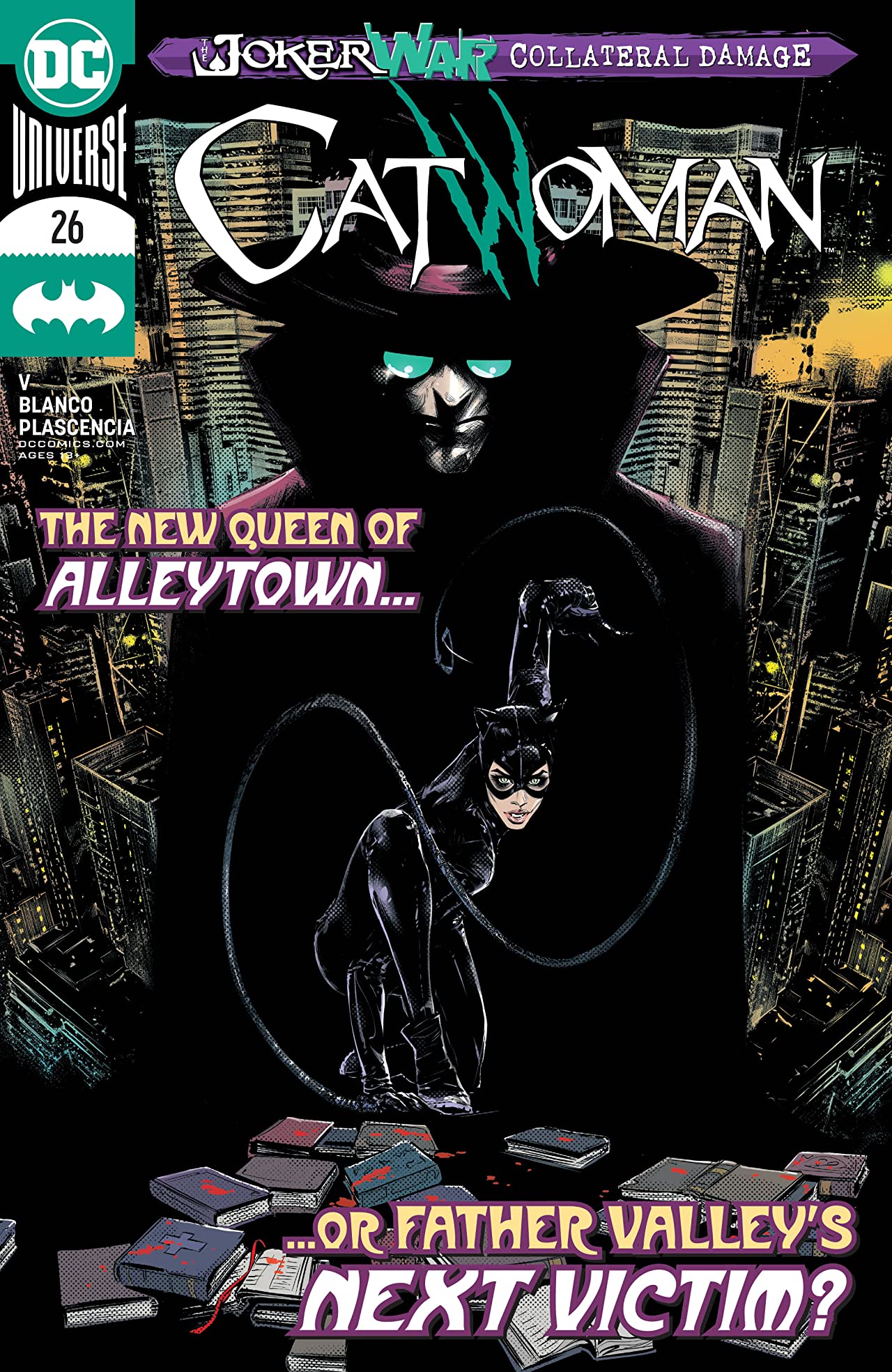 Overview: As Catwoman makes her moves to take over as queen of Alleytown, Oswald Cobblepot sets his plan for revenge against Selina for her double-cross during the Joker War.

Synopsis (spoilers ahead): Inside the Iceberg Lounge, Oswald Cobblepot speaks to Father Valley about the task at hand – revenge. Catwoman has made off with a lot of his money, as well as that of other criminals and Wayne Enterprises (as seen in the events of Joker War and specifically Catwoman #25). The Penguin isn’t taking it lightly. He’s also not keen on the pocket bible that Valley gave him and questions the rationale. Father Valley states that it’s just a cover as all those in his profession would have. The two agree to the terms of the arrangements and Valley sets off to capture his prey.

In Alleytown, Selina is springing through the sky to make it home for a meeting with Leandro. Once there, he provides her with details of the big players of the Alleytown underworld, including the two major players around town. She wants to be the queen of Alleytown. To do so, she will need to take out one of the Alleytown bosses, if not both. She decides to go after Nahigian, the drug kingpin, first.

The following day, Detective Hadley shows up at a crime scene and meets up with Detective Rigs, a member of the Organized Crime division of the GCPD, as he investigates a break-in. Ends up, the warehouse is a chop shop run by Nahigian of the Khadym drug mob. As they look over the crime scene, noting that nothing major has been taken, Hadley receives a call from an agent with the FBI, who warns him of Father Valley’s arrival in Gotham.

On the Gotham Docks at Sizzle’s Gentleman’s Club, Pit Rollins is having a one-on-one conversation with one of her employees, hanging from a pole, who she believes is skimming money from her. Catwoman crashes the party and proposes a business partnership. Pit is unsure how Nahigian will feel about such a partnership. Selina then explains how she and the Strays broke into the Khadym’s chop shop and with the information she obtained, she’s going to steal Nahigian’s drugs right from under his nose. As Selina departs the parlay, Leandro questions whether or not they can trust Pit to not warn Nahigian of Catwoman’s plans. Selina, on the other hand, is banking on it to happen.

Back at the Nest, Selina returns and thanks Shoes for keeping an eye on Maggie while she was away. As she crashes on the sofa, she begins to question why she is waging the war she is planning to begin. Maggie assures her that she is doing what she knows how to do. As she thanks her sister with a hug, little does Selina know that they are being watched. Father Valley has found his mark…

Analysis: Ram V has me excited to read Catwoman again. I say this as someone who has followed the series from the start and started reviewing it for TBU not too long after. As the series started, I was excited to see what Joelle Jones would bring to the character. As the Villa Hermosa saga dragged on and on, I only wanted it to come to an end. The story was completely disjointed from the overall Batman Universe, which was unfortunate for both the character and readers excited to see Catwoman in her own book again. So far, after two issues, Ram V has given us a Selina Kyle that is much different than the one readers received in the first twenty-four issues.

There are several things that have been enjoyable about Ram V’s short run thus far. First and foremost, we get a story that is in line with the storyline going on in one of the main Batman books, this being the main Batman title. Consequences of the Joker War, particularly Selina’s part, are quite apparent. The Penguin wants her dead for the money heist double-cross she pulled on him and Edward Nygma, and he is pulling out all stops in making this happen. This is done through the hired assassin Father Valley, a new villain to Gotham. It will be interesting to see how much he will be a part of the series. Will he just be a minor bad guy who will go away by the time this arc ends or does Ram V have plans on making the professional hitman a mainstay getting under Catwoman’s skin. Not much can be figured out based on the few pages Father Valley has appeared so far.

I am loving Ram V’s characterization of Catwoman. She is confident in herself again and has no problem admitting that she had gotten too comfortable with herself. Now she wants to be on top again and she intends on doing so by becoming the Queen of the Alleytown underworld. We got hints of this new Catwoman in issue #25 as she pulled off the money heist and double-crossed Cobblepot and Nygma. This characterization continues this issue as she plans to take on the Alleytown underworld on her own (with the help of the Strays of course). Knowing she is likely to be double-crossed by Pit Rollins in trying to down the Khadym mob, she’s moving forward because, as Maggie reminded her, this is what she does.

Speaking of Maggie, I am happy to see that she is still around and that we can hopefully see Ram V build on their relationship. Looking forward to her playing more of a role as we move forward.

I am more than happy to see Fernando Blanco as the artist on this series as the art, along with FCO Plascencia’s color, is absolutely stunning. Blanco teamed with Ram V earlier for some fill-in issues of Catwoman, and I am happy to see him back again.

If I have one gripe about the issue, and it’s really about not just Catwoman but also Batman (please read Scott’s review of Batman #101 here), is that this strong, confident feisty Catwoman has now separated from Batman again. I don’t know why DC won’t let Bat/Cat fans have nice things by letting these two be together and grow their relationship. Some might argue that DC is making this move in order for the Tom King Batman/Catwoman series to move forward. However, seeing that the King series more and more won’t be in continuity (though I would be happy to be proven wrong), I believe there’s a place for Bat/Cat to exist in the main books. That’s where they belong.

Something tells me, however, that this isn’t something to blame Ram V for. So, I won’t. Instead, I’m going to enjoy this story while it’s good.

Final Thoughts: Great issue as Ram V continues to bring a truly confident Catwoman back into the Batman Universe. It’s unfortunate, though, that it has to happen at the cost of Bruce and Selina’s relationship. But Ram V has me committed to the ride for right now, and I’m on board to see where’s he goes.