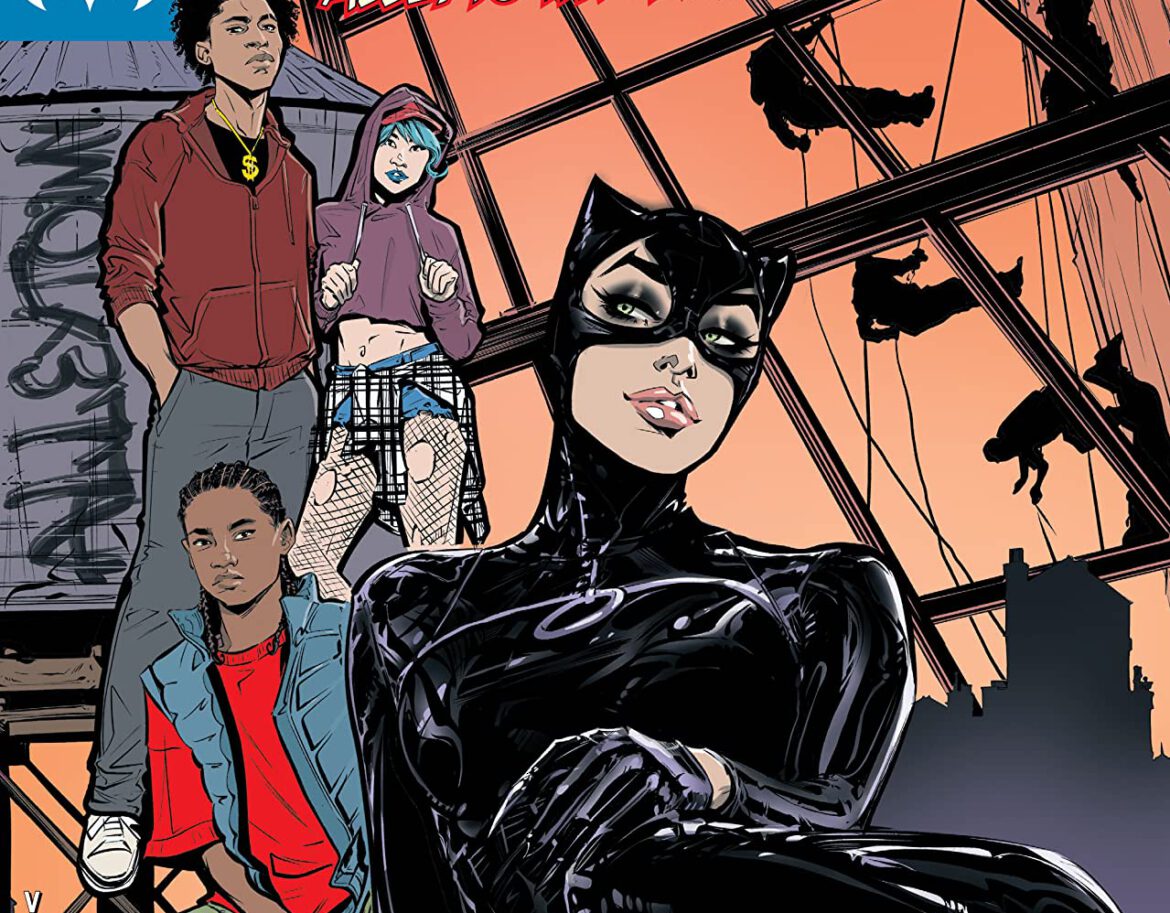 Overview: As Selina continues to roll out her plan to take over as queen of Alleytown, more is learned about the drugs the Khadym Mob has been flooding the neighborhood with.

Synopsis (spoilers ahead): A group of assassins from the Khadym Mob gathers outside of the Nest with orders to kill Selina Kyle and to burn the Nest to the ground. Little do they know that they’re being watched by Selina’s Strays, who have been awaiting the mob’s arrival. At the Alleytown Docks, Catwoman stands on top of some shipping containers with gas cans, watching a deal go down as she communicates with Leo over comm. Pit Rollins is auditioning for some potential business. Selina has other plans, however, and plans on stealing the show.

At GCPD’s Alleytown precinct, Detective Kollak and his partner Lou are interrogating Skidmark about the events leading to the loss of Nahigian’s drug shipment (see Catwoman #27). Skidmark doesn’t reveal anything to the crooked cop, who threatens harsh punishment before being interrupted by Hadley, who reminds the cop of the youngster’s rights. Before they come to blows, the precinct chief informs the detective that Hadley is officially working with the department. Hadley releases Skidmark but not before planting a tracking device on him.

Back at the Nest, the Khadym Mob makes their move. At the same time, Selina makes her moves at the docks, taking out Pit’s goons one by one until she appears in front of Pit and her business associates. She coaxes the associates to leave, seeing that the docks are now on fire from Catwoman’s antics. Now alone, Pit tells Selina that she’s finished, knowing that Nahigian’s mob is making their move on the Nest as retribution for the drug heist. Selina, however, takes the news in stride and begins to lay out the trap she sprang for the unwelcome visitors, laced with booby traps leading the Mob into the waiting arms of an equipped group of Strays. Nahigian is going down for good, and Pit might have some crooked cops looking for her. As Selina leaves, she tells Pit that she will learn to enjoy working for her. If not, she’ll be ruined.

As Selina heads away from the docks, Father Valley walks past her. They both spring to strike – Valley with a blade, Selina with her claws. The two exchange words as Catwoman realizes that Valley is the individual who took out the sniper sent to kill her (see Catwoman #27). Father Valley gives Selina a final warning as he departs. He’s going to strike when she least expects it; when he does, he’s going to take everything from her.

At the Alleytown precinct, Hadley and Rigs are discussing the case against Nahigian. The feds are coming in to take over the case. Rigs mentions a report on some of the meth seized from the Khadym Syndicate (see Catwoman #26). Some of the meth was laced with a new compound, a compound found to be plant-based.

The issue ends showing a trapped and unconscious Poison Ivy suspended in some liquid.

Analysis: What a really good issue! When Ram V first took over the title, I expressed concern over where he would be taking the character. I was convinced we would continue to get a disjointed story separated from the overall Batman universe. Boy, have I been proven wrong. Since taking over Catwoman, Ram V has given this book new life even though Selina has been removed from Gotham proper and into Alleytown. While doing so, he has also stayed consistent with the overall Batman universe that we’ve been seeing in titles since the conclusion of Joker War. This trend continues in this issue in a big way. We see a Selina Kyle who is slowly but surely finding herself again, something she struggled to do during Joelle Jones’ run on the title. This Catwoman seems similar to the mob boss Catwoman during Valentine’s time on the run. I’m excited to see this character development continue.

I would be remiss if I don’t express the surprise and anticipation in seeing the final panel of the issue. Going through the pages of Tynion’s Joker War Zone, the assumption was that we would be getting the stories in those pages somewhere at some point during Tynion’s run on the main Batman title. Solicits show that to not be the case. But we see in the last panel that we might be getting more sooner rather than later with the trapped, unconscious Poison Ivy across the page. Will Catwoman play a role in the Queen Ivy story we got hints of in Joker War Zone? Whether or not, I’m excited to see where V goes with this.

My only gripe with this issue, as with others in this current run, is what’s so important for Detective Hadley to be here. All of the events that have occurred thus far could have happened with any other law enforcement officer. Why is it so important to bring him in from Villa Hermosa? I hope that it is revealed soon and that he isn’t just a plot point/eye candy for Selina to lead along as she seems to be doing.

Fernando Blanco and the team continue to provide great art on this series. I don’t have much more to say that I haven’t already said in previous reviews. Keep this creative team together for as long as possible, DC.

Ram V and team continue to impress and breathe some life into a once-dying title. We have two months of Future State (also written by Ram V) coming up next. However, considering that final panel, I am so ready for the return to Alleytown.