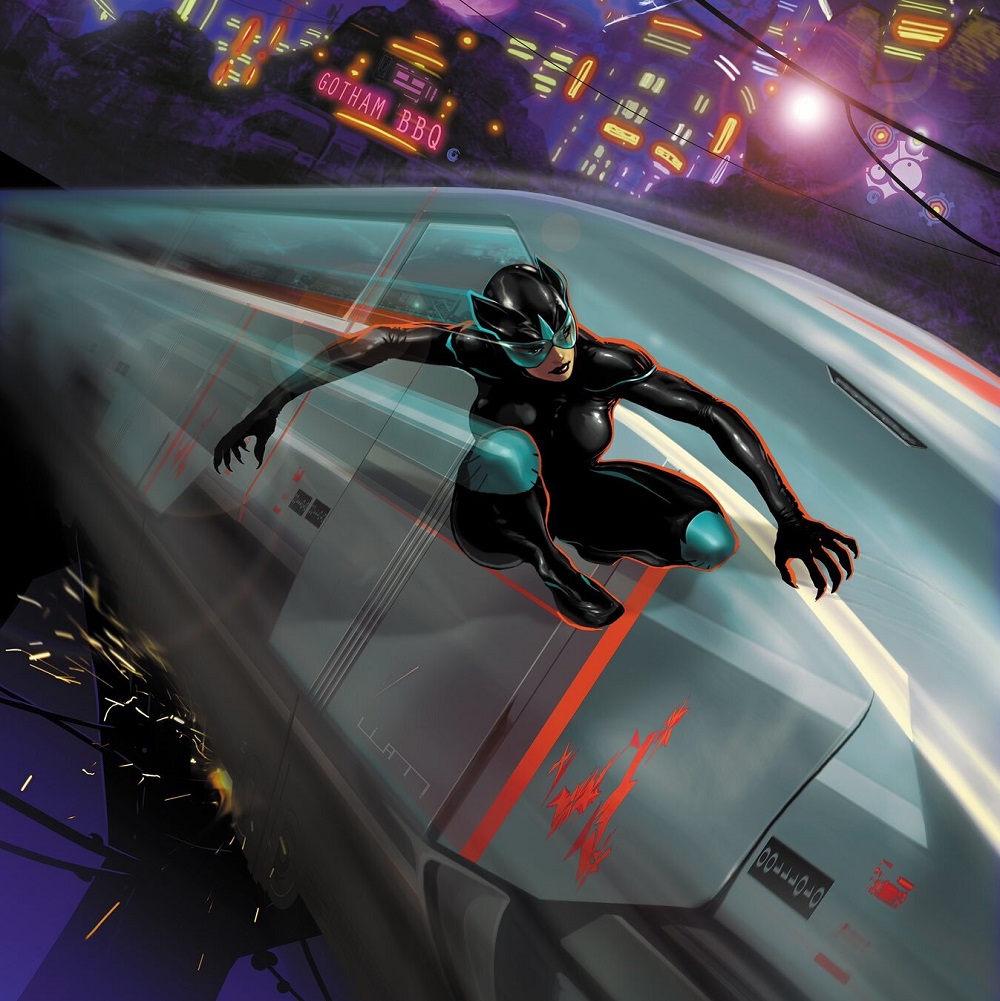 Overview: In the dystopian Future State Gotham, Catwoman mounts a train heist with the intention of commandeering the train. She is assisted by allies in and out of the train but seems focused on several high-profile prisoners. Before she can get to the most well-guarded of these prisoners, a familiar and powerful character removes her disguise and is poised to free the prisoner, whose name is … Bruce.

Synopsis (spoilers ahead): A crowd is waiting to board on a train platform. A man and a woman, both in uniform, observe the crowd, and the man explains to “Ms. Canorus” that the ultimate goal is a “return civility to Gotham” via the efforts of the Magistrate. The man further explains that the boys and girls are headed to Whitepoint Reformatory. From the crowd, a man objects, pronouncing the uniformed pair fascists and noting that they would not dare behave so if Batman were still alive. The uniformed man directs the guards to brutalize the speaker. Members of the crowd raise their left arm and make a signal with their hands. They speak in unison, noting that “there will always be strays.” The brutalized man chants along until he is silenced with a pistol butt. The train arrives, and Ms. Canorus boards with the uniformed man, whom she addresses as “Captain.”

In the cab, Captain introduces Ms. Canorus to his staff and identifies her as a liaison to Gotham City Council. Ms. Canorus is tasked with reporting on the facilities and conditions inside to Peacekeeper-01. Captain indicates that he expects the journey to go smoothly during the four hour trip to Whiteport Reformatory. The train pulls out, and on the far wall of the station a graffiti artist has scrawled “BATMAN LIVES.”

Our hero is preparing for a mission. She is walking towards the Catcycle and two allies are instructing Catwoman on the precise timing needed to pull it off. The magnets in her suit will work for twelve minutes at most, and allies Cheshire and Leo are concerned that the mission will be too much, given the large number of guards on the train. Catwoman notes that she has some inside help and points out that their resistance is what “he” would have wanted. Cheshire tells Catwoman she needs to let him go.

Catwoman roars off, and inside the train two adolescents discuss an easy “pull” off the guard standing by the door. Catwoman reaches the Pullman Bridge right on time, and her allies have set up a ramp Cat uses to launch herself right onto the train. The magnets in her suit activate wings to glide and a shield to cushion her fall. On the comm, Leo reminds Catwoman that she has twelve minutes to get inside.

One of Catwoman’s ‘kids’ in the last car tells the guard he has to pee, stands up, and makes his way to the door. He starts typing in door codes on a keypad, and just as the guard takes aim, the door opens, a bullwhip snakes inside, and out goes the guard. In the cab, a guard informs Captain of a disturbance in coach fourteen, and Captain sends extra guards from coach twelve. In response to Ms. Canorus’s question, Captain states that high-risk prisoners are on coaches twelve and four, and Ms. Canorus states that she is going to take a look for her report. She enters coach four as Captain’s warning to mind the guards’ instructions rings in her ear, and she sees a single bearded man manacled in some kind of containment chamber flanked by six guards.

In coach fourteen, Catwoman signals Cheshire and Leo to start their countdown timers at fifty minutes to Irontown Tunnel. The ally who opened the door, named “Billy,” expressly doubts their ability to escape the train, and Catwoman smiles: the plan is to capture the train, not escape it. She enters coach twelve and deals with six guards with ease. Catwoman finds a containment chamber with Onomatopoeia inside. She lets him out and offers his freedom on condition that he help her take out all the guards to the front. Onomatopoeia prepares for battle by dipping his finger in a guard’s blood and drawing his symbol on a shirt that he then wraps about his head.

Catwoman is concerned, but the door opens, and guards pour in. She and Onotomatopoeia begin to fight. Captain is outraged, and orders security personnel to coach twelve, leaving Ms. Canorus alone with a single guard. The guard assures her he will stay to protect her, and Ms. Canorus promptly stabs him in the throat. Ms. Canorus then turns to the bearded man in the containment chamber, removes her blond wig, revealing long, dark hair, and says, “It’s Talia … Can you hear me, Bruce?”

Analysis: This is an excellent book. I love train heists in general, and Ram V’s effort does not disappoint. He not only sets the dystopian scene in only a few pages, he also frames the underlying mystery perfectly: In the Future State, is Batman alive or dead? Once the train leaves the station, the sense of movement and dynamism does not let up. The geography of the train heist parallels the narrative; as the train hurtles forward, so too does Catwoman. Initially on the Catcyle, then soaring through the air, then battling her way through guards and coaches towards the cab. It sounds like a video game, but the book elevates the familiar genre. The writing is crisp and exciting, and the deep red and blue tones in Otto Schmidt’s colors make the action feel even more vibrant. I do wonder whether the mystery of Batman could have been drawn out a bit more, as it’s surpassingly obvious from the moment you see that the bearded man in containment is Bruce. But given that there are only two issues in Future State: Catwoman, I suppose the creative team has to get on with it, so to speak. (And of course from Future State: Dark Detective #1, we know that Bruce is alive in Future State Gotham, though the relative chronology between that book and Future State: Catwoman is unclear). We sense from the beginning that there is something unusual about Ms. Canorus, although it seems pretty difficult to guess that she is in fact Talia (my guess was Future State Babs!).

Captain does not seem like much of a villain, to be honest, although the pairing of Catwoman with Onomatopoeia is a nice touch that subtly reminds the audience of Catwoman’s somewhat ambiguous history with Batman’s rogues. Where the book leaves off, there seems little question that the combined force of Catwoman, Talia, and a freed Bruce will be more than sufficient to commandeer the train and meet their objectives (which are left opaque). Will Peacekeeper-01 mentioned by one of the guards show up? What consequence is it if the train does not deliver its boys to Whitepoint Reformatory? It does seem like there are a lot of questions to resolve in the second and final book, but I look forward to seeing how the creative team handles it.

Future State: Catwoman #1 is a fun, well-crafted book that packs in a lot of action, movement, and interest. Ram V and Otto Schmidt excel at creating a tense, pulse-pounding opener that doesn't let up.