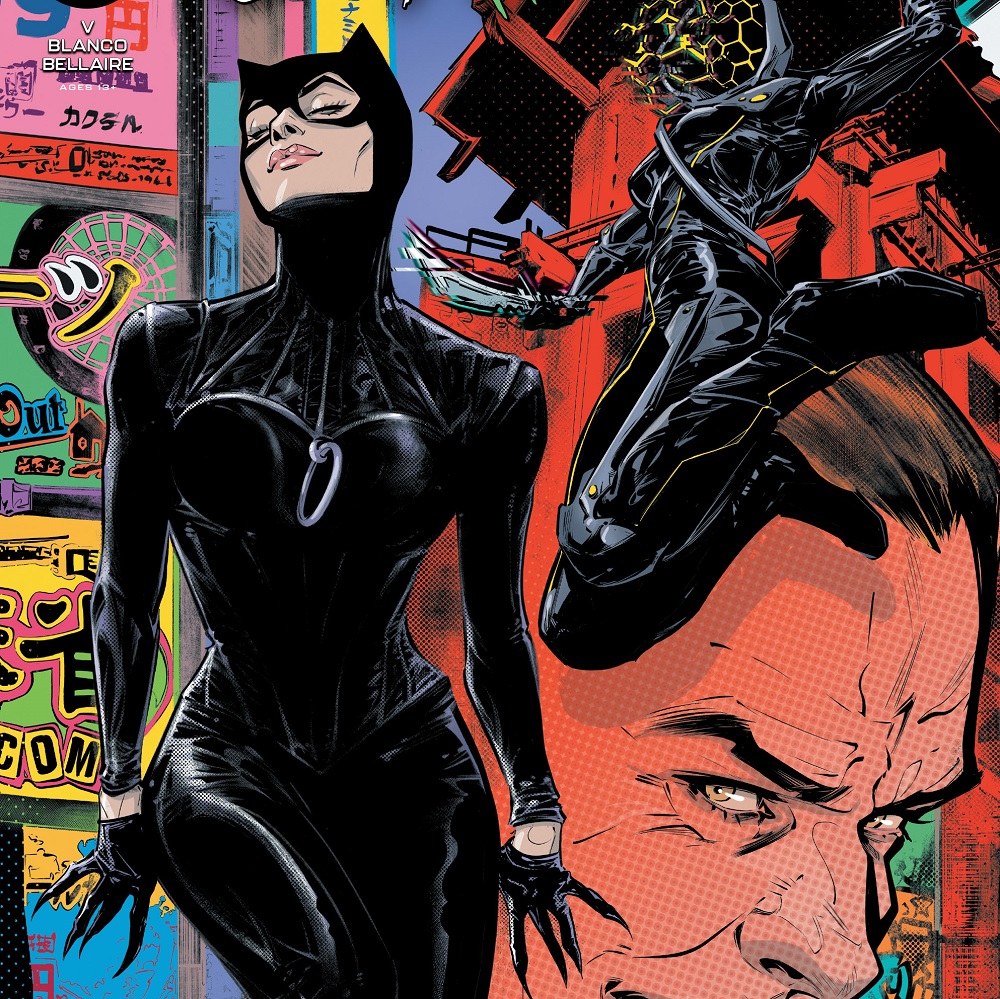 Overview: In Catwoman #29, a terrifyingly violent and powerful new assassin makes her move as Catwoman attempts to counter.

Synopsis (spoilers ahead): A mysterious, faceless, tech-enhanced assassin performs an extremely violent hit at the Nahigan Mansion in Gotham. Meanwhile, in The Nest, Catwoman’s home base in Alleytown, Detective Hadley comes to visit Selina Kyle, who is sunning herself on the roof in the pool. Hadley expresses frustration at the mysterious drugs and property damage Selina caused in the last issue, but Selina claims she owes him nothing. As Hadley leaves, he warns her not to discard her friends, and Maggie teases her about the romantic tension.

In a mysterious lab, scientists report on the drugs they are making using Poison Ivy, who is trapped in a bottle, to Simon Saint. This organization ordered the hit on the Nahigan Mansion and now sends their assassin after the Riddler. Catwoman tracks the drugs to Riddler just as the assassin attacks, saving Nygma’s life (so she can grill him), which leads to a brutal fight as the assassin reveals mysterious abilities giving her a huge edge in combat. Riddler and Catwoman flee, jumping into the river to escape, but Eddie is hit by the priest assassin, Father Valley, who has been trailing Selina since the start of this run. The pair crawl out of the river, and Ngyma reveals that Ivy is being used to make the drugs and that he’s been shot.

Analysis: Ram V brings his Catwoman run back right where he left it with Catwoman #29, with strong callbacks to the first issue of his run proper (Catwoman #25, the excellent tie-in to Joker War, though he also wrote some filler issues prior to being assigned to the title on an ongoing basis). The interlude two issues of Future State were a huge standout, not only showing V’s skills at plotting and action, but also providing really excellent emotional moments with the reunion of Bruce and Selina, and the powerful finale of “Batman Lives.”

In some ways, those two issues throw the main weakness of this issue in high relief – Selina and her supporting cast are fun to read, but there’s no true emotional connection tested. The closest we get is the banter between Maggie and Selina, a sisterly teasing that hints at fondness and the deeper connection between the two, but there’s nothing really at stake there, so it doesn’t match the power of the kiss Bruce and Selina shared on the train in the future. Hopefully, that will be rectified as Ram V raises the stakes and develops the relationships, but currently, it’s mostly a really well-done crime story, reminiscent of Ed Brubaker’s seminal run, and playing with a lot of the same pieces that Genevieve Valentine did in her magnificent pair of arcs in the New 52. Hopefully, V can create the same emotional connections we saw between Selina, Holly, and Bruce in Brubaker’s run, or Selina, Antonia, Eiko, Stephanie Brown, and more in Valentine’s run – we see the hints of it with Maggie and the Strays, but it’s still nascent.

Catwoman #29 also introduces the new villain, according to other sites named “Wight Witch,” who has a really cool design and very fun powers (either teleportation or cloaking, seemingly tech-based, which makes the “witch” moniker a bit confusing), and hopefully, we’ll get some backstory and motivation from her soon. Selina’s nemesis, Father Valley, continues to bother her, and Selina’s relationship with the Riddler reminds one of their classic conflicts like Catwoman: When in Rome. Plus, we have the frayed relationship between Selina and her detective ally Hadley – so all in all, the pieces are in place for a great crime/heist thriller. We just need the heart.

Fernando Blanco draws excellent tech and fights and a very sexy Catwoman in a swimsuit. Colorist Jordie Bellaire also highlights the texture and excitement of the comic without ever over-rendering the details. Though not quite as pyrotechnic as Otto Schmidt’s two issues of Future State: Catwoman, Blanco is a really excellent choice for the comic since he took over for Joelle Jones, and it’s nice seeing Ram V push his action skills as well as his excellent character appeal.

Former series writer/artist Joelle Jones provides the main cover for Catwoman #29, continuing the graceful handoff between Jones and Ram V as writers, and her gloriously colorful depiction of Catwoman (wearing Jones’s new costume design) against a backdrop of her new faceless villain, the Riddler’s huge threatening face, and the backdrop of Little Tokyo is beautifully bold. Jenny Frison provides the cardstock variant (for a dollar more), with Catwoman lying upside down on a bed of dollar bills, huge diamonds, and pearl necklaces, a classic depiction of Catwoman’s favorite non-Batman things.

Ram V and Fernando Blanco drop us right back into the criminal action as Catwoman’s list of deadly allies grows with the addition of the Wight Witch. All the right elements mix together, though hopefully the emotional stakes will rise in the next few issues.