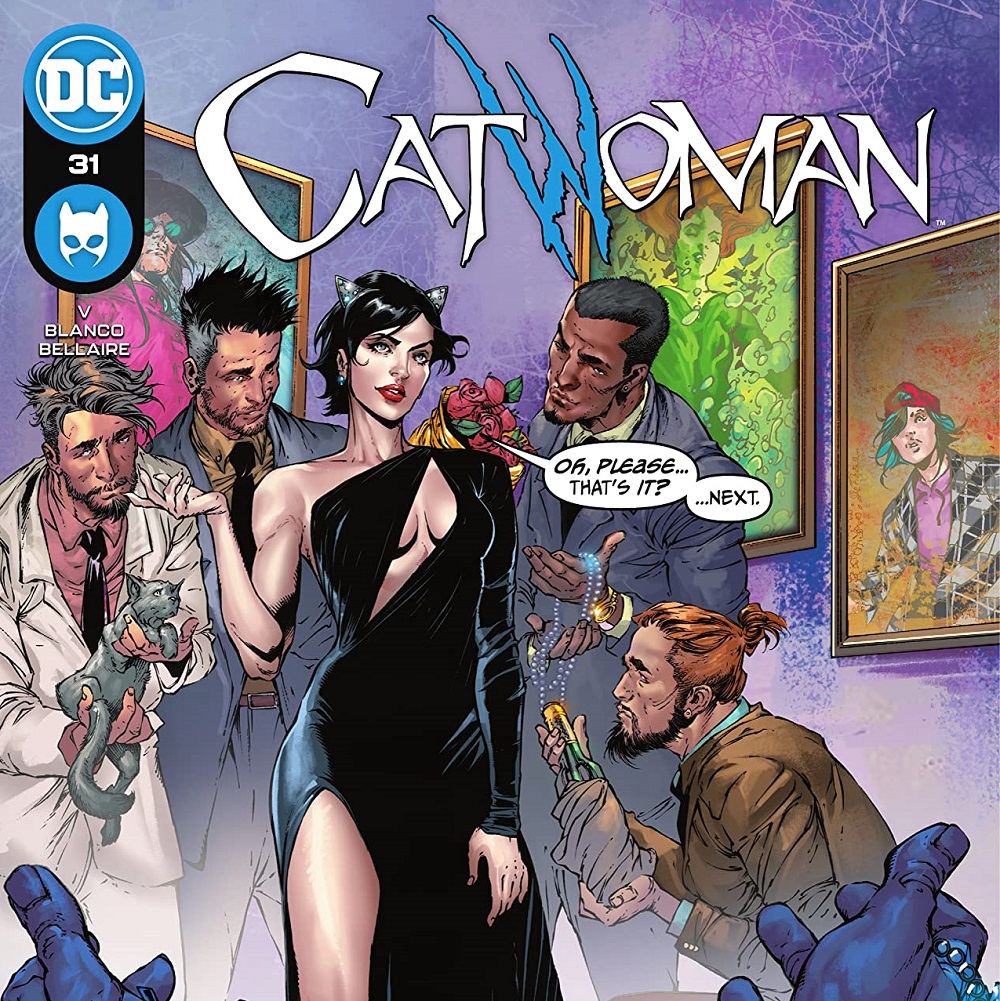 Overview: In Catwoman #31, Catwoman faces down Siddhart Roy at his party, having pulled a classic heist to rescue Poison Ivy.

Synopsis (spoilers ahead): Catwoman faces down Siddhart Roy’s henchmen, but Roy grazes her with a bullet, leading to her recounting the heist she’s run on him, starting at the party beginning in the last issue.  Catwoman’s flashback begins with her prepping Roy’s prints to figure out his safe combination with a handshake, switching from sexy dress to sexy Catwoman after stealing his Degas painting as a distraction, breaking Poison Ivy out, and having her Stray helper, Shoes (revealed as Lian Harper, daughter of Roy Harper and Cheshire in DC Festival of Heroes #1 last week) sneak Ivy out in the catering cart. Shockingly, Roy kills himself because his employer, Simon Saint, is scarier than Ivy and Catwoman’s displeasure.

In one of Gotham’s skyscrapers, we see Saint talking to Rhea, his enhanced soldier known as the Wight Witch, last seen a few issues ago trying to kill Riddler, and ordering her to kill Catwoman.

Selina Kyle meets with her mystery informant who tipped her off to Ivy’s location, but he vanishes before Selina learns his name. Pamela Isley is in bad shape, mirroring the emotions of everyone who speaks to her, but Selina also learns that Leo, another of her associates, has been captured by Father Valley.

Analysis: Every month, TBU sings the praises of Ram V’s Catwoman, and every month, Ram V and Fernando Blanco deliver another stellar issue. This week, a classic Ocean’s Eleven-style heist is narrated by Catwoman in Catwoman #31, with a touch of emotional reunion and insight by Poison Ivy in the aftermath, and the two bigger bads start to come after Catwoman with a vengeance as Simon Saint and Father Valley draw their nets tighter around our anti-heroine. Drawing comparisons to Genevieve Valentine’s Catwoman run once again, this is a crime comic that builds up a stellar supporting cast and truly nasty villains, along with polished dialogue and tight plotting.

One small continuity issue appears with Ivy embracing Selina with much skin contact, but no eruption of allergies or poison reactions – perhaps this trait is no longer expected from Ivy by DC? However, Ivy’s insight into Selina’s emotional reaction to her forced separation from Batman works to continue the thread of emotion which gives Catwoman her quality of pathos and connection to the Dark Knight.

Catwoman under Ram V and Fernando Blanco continues to be one of the most solid books in the already rock-solid Batman line, with this issue delivering an excellent heist story and setting up further mysteries and confrontations with the foes who continue to amass against Selina.