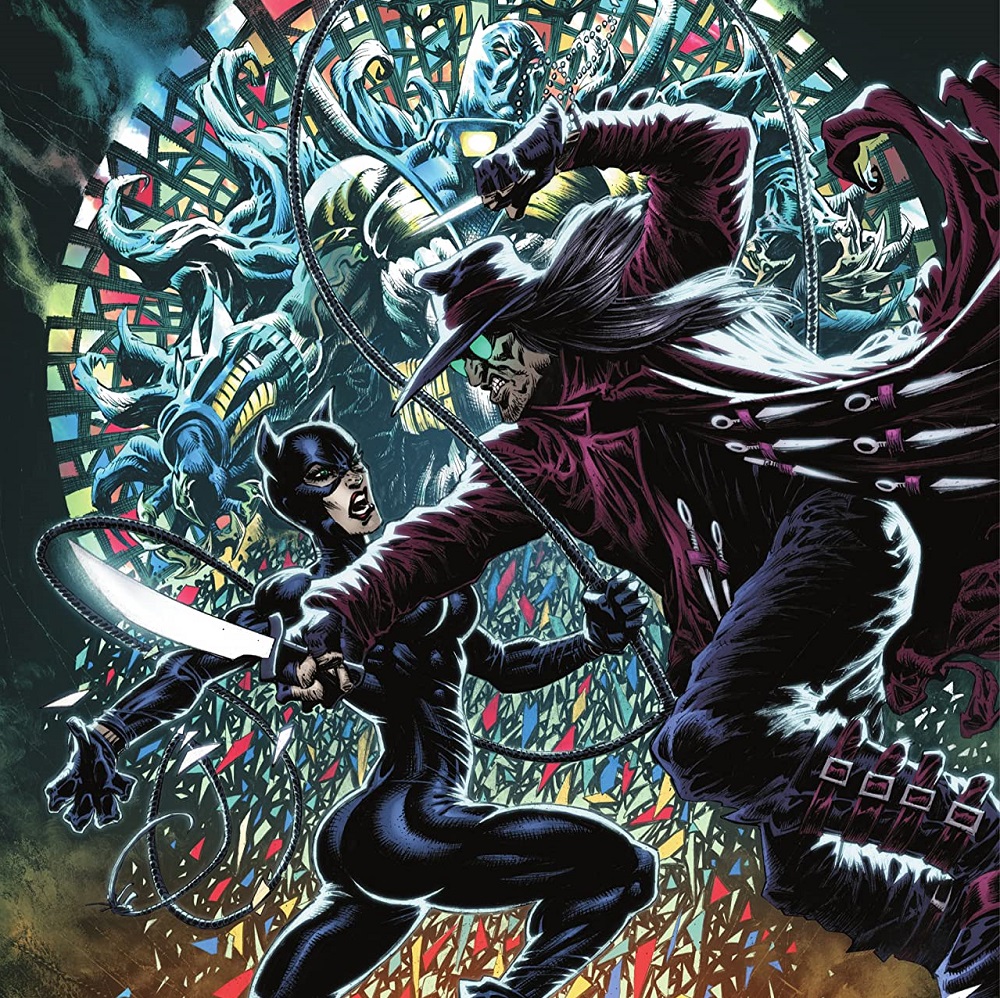 Overview: In Catwoman 2021 Annual #1, as Father Valley prepares for an explosive showdown with Catwoman, we learn his bloody backstory with the Order of St. Dumas and the father of Jean-Paul Valley, Azrael himself.

Synopsis (spoilers ahead): Catwoman 2021 Annual #1 begins in an empty cathedral, with Father Valley bathing, and then proceeds to whip himself while pondering his past. Selina Kyle visits her follower Leo in the hospital, shot by Valley in the last issue, reacting with rage to his plight.

Years ago, we see Azrael and his sidekicks killing and purging rogue members of the Order of St. Dumas, then returning to home base in a Spanish monastery, where Ludovic Valley, Azrael, catches up with his surrogate son, Karl Wasieman, an orphan the Order raised. Ludovic tells Karl his philosophy of the wolves and the sheep, seeing himself as a wolf doing evil in God’s service, and is then summoned by Padre Speranza, the leader of the Order. Speranza tells Ludovic that the Order is exposed to the spies of the world, and to escape, they must kill the majority of their members and retreat. Though Ludovic’s soul rebels, his master reminds him that he purchased his son Jean-Paul’s freedom from the order with a vow of unquestioned obedience.

Later, after slaughtering his brothers in France, Italy, and around the world, Ludovic returns to the monastery and kills those remaining, but Karl fights back and discovers who has been behind the destruction of the Order – his father figure. Distraught, Karl throws himself from a tower, but survives, and believes God has spared him so that he might kill others, causing them to call on God in their deaths. In Italy, Azrael finds the mole dead – and Karl reveals himself, raging that Valley could have turned to him to find and kill the mole without slaughtering their comrades. In response, Ludovic gives Karl a new identity to flee the Order, and Karl leaves, swearing to kill Ludovic if they meet again.

In the present, Detective Hadley watches as Alleytown convulses in protests against Mayor Nakano’s anti-vigilante orders, and Father Valley explodes the cathedral in Alleytown.

Analysis: Annuals, as always, are an ever-shifting element of an ongoing comic series. Sometimes they are a special one-shot story that either is mostly disconnected or tangential to the main story in the regular issues (as with last year’s Batman Annual #5, or all of the Batman annuals before that in this Rebirth run numbering). Other times, they function as an extended chapter of the ongoing narrative, often taking a semi-detached perspective, but tying tightly into the storyline, as we see in this Catwoman 2021 Annual #1. DC has chosen to further confuse things by starting to label annuals by their year, rather than by the number of annuals in a run.

All that structural commentary aside, Ram V provides a crucial piece of his ongoing Catwoman storyline, following directly from his last regular issue, but using the extra space and detached perspective of the annual to give the rich, tragic, and bloody backstory of his terrifying antagonist Father Valley. As a fan of Azrael and the Order of St. Dumas as elements of Denny O’Neil’s expansion of the world of Batman in the 1990s, it’s wonderful to see them return to their bloody, fanatical, theologically confused framing as the heirs of the Templars, as opposed to the Batman and Robin Eternal reboot of them as technological cultists (seen recently in the Nightwing story found in Let Them Live #2).

While the techno-cultists are fun, the richness and mystery offered by the brutal medievalism of O’Neil’s conception intrigue me more, and I hope that Ram V will do more with them both in Catwoman and future projects. The key of the story, however, is the twisted father-son relationship of Ludovic Valley and Karl, who becomes Father Valley. The beautifully wrought false philosophy of wolves doing God’s work is quite well handled, and the pain Karl feels that twists him into Father Valley makes a lot of sense – it will be quite interesting seeing how Ram V concludes his storyline (at least for now). While the issue of the villainous religious fanatic still seems a bit shallow, especially considering the lack of any positive examples of religious figures in the series so far, the warmth Ram V imbues the characters with despite their flaws and self-destruction balances them out, preventing them from being simple caricatures.

On art duties, we have a trio of pencilers, all colored by David Baron, who drenches all of the sections (present and past) with appropriate hues – neons for the present, rich dark jewel tones for the past. Fernando Blanco, the main artist of Catwoman, provides the framing pages in the present, giving his expected flair and appeal with thick lines and thoughtful storytelling. Kyle Hotz draws the main flashbacks, recreating the 90s feel of the Sword of Azrael/Knightfall days with beautifully judged white background panels, Kelley Jones-esque intricate cloth folds, and enormous patches of textured black. Rounding out the trio of pencilers, Juan Ferreyra provides dark humor and intense pathos showing the betrayal of Ludovic and the backlash of Karl, rendering the expressions and action with his trademark painterly style. Though it is usually nicer to have a single artist on an issue, the sharing of the artwork duties is well handled by the writing and skills of the artists.

Kyle Hotz provides the main cover for Catwoman 2021 Annual #1, highlighting a fierce Catwoman fighting a terrifying Father Valley, though Selina’s pose is a bit overly rotated. Behind our battling duo, we see a gorgeous shattering stained glass window with Azrael Batman’s body atop it – the choice of that specific costume provides a bit of a puzzle, but the rendering is gorgeous, so the appeal definitely outweighs the confusion. Liam Sharp’s gorgeously rendered painted variant shows Catwoman and Father Valley framed by a curiosity library collection, symbolizing the historical/flashback nature of the interior story, and including many, many easter eggs to delight the eye.

Ram V’s Catwoman crime story progresses in a beautiful chapter focusing on the dark and rich history of the Batman Universe in the Order of St. Dumas, which forged the weapon of Father Valley, now pointed at Catwoman and Alleytown’s heart!