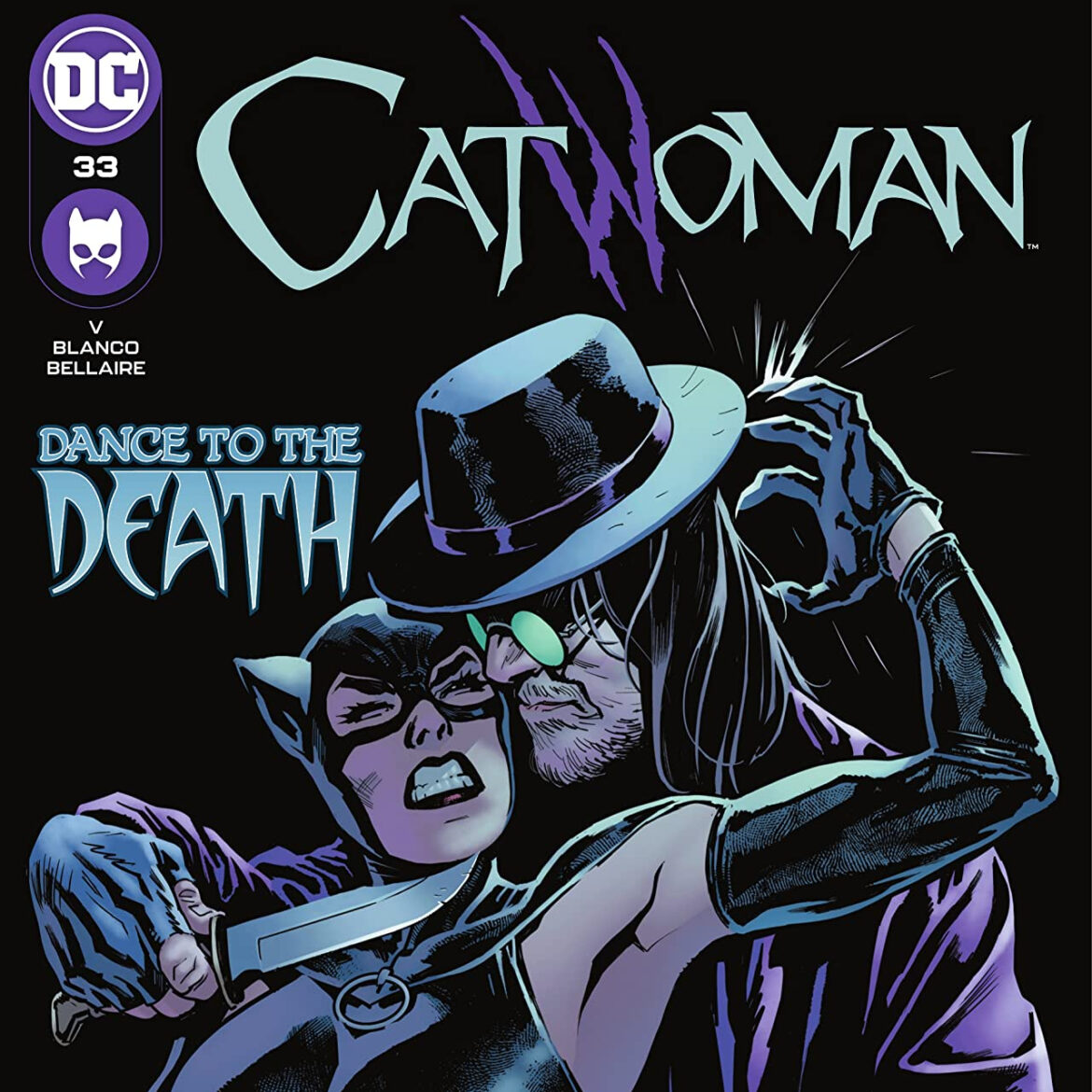 Synopsis (spoilers ahead): Catwoman #33 begins as Alleytown burns after Father Valley blew up the cathedral in this year’s annual issue, with television news reports buzzing about whether protestors against Nakano’s Magistrate forces and restrictions started the fire. Nakano breathes fire and fury against the protestors and in favor of the police and Magistrate actions, while Catwoman patrols her town, worrying about her friend Leo, nearly slaughtered by Valley in Catwoman #32. Her Strays set up a new base (to keep Maggie safe in the Nest, their old base), and use cables and radio to subvert the shutdown of cell phones and internet by the Magistrate, with the aid of the Riddler and Shoes. Basil Karlo, one of the Clayface’s, arrives, bringing Killer Croc, Firefly, Cheshire, and the New God Knockout as potential allies seeking a second chance.

At the police precinct in Alleytown, Detective Hadley makes his views in favor of Catwoman known and discovers that Father Valley is in town, as well as Valley’s hitman history and connection to Penguin-causing Hadley to rush out to warn Catwoman.

Zooming along the docks with her villain patrol, Catwoman muses that she’s not built to lead people down a better path, and Basil proposes that Rollins, one of Selina’s underbosses, smuggle people in and out of Alleytown, breaking the Magistrate’s siege. Rollins agrees, but warns Selina that she can’t stay Queen of Alleytown if she tries to be good. However, when Catwoman and her gang walk out of Rollins’ office, Father Valley blows it up behind them, killing Rollins, and viciously attacking Catwoman in a full-out knife fight, stabbing and slashing her deeply in the abdomen. Clayface and Killer Croc attack Valley, giving Selina a chance to escape into the water, as the Magistrate scares Croc away and Valley blows Clayface up with a grenade. As Selina sinks, bleeding out, we see Batman diving in after her, reaching out his hand to hers.

Analysis: Ram V’s dark crime tale (pun intended) pitting Catwoman against her nature, other crime lords, and his new creation Father Valley, comes to a new head as Catwoman loses a major servant in Pit Rollins, and is brutally wounded by Valley herself. The plot in Catwoman #33 leading to the conflict feels a bit underbaked, mostly serving to get Selina, Croc, and Basil next to Rollins for Valley to blow Rollins up, since there’s no real way for Catwoman to beat the Magistrate until Fear State is over (and even then, the Magistrate might last much longer, depending on what Bat-architect James Tynion IV has planned for the Bat-Books as a whole).

Ultimately, though I am really enjoying the intricate crime plot and struggles Selina has going for her, unlike Genevieve Valentine’s run, where she similarly had to take control of the underworld and try to force it into a better structure for those who live within it, there’s no real sense that Selina can actually accomplish anything like that in this run at this time. So the real emotional connection has to be through the characters and relationships – Selina’s mentoring of her strays, her allies like Detective Hadley and Leo, her uneasy connections with her villainous counterparts like Poison Ivy, Clayface, etc, and above all, the hanging Batarang of Damocles, the “one year break” she and Batman agreed to in Batman #101 following Joker War. That agreement appears about to be broken – and not by Catwoman, fond of breaking rules though she is, but by the rule-maker himself. The final page, Catwoman reaching through the intensely bloody water for Batman’s hand, provides a powerful punch, almost as intense as Valentine’s scene of Catwoman collapsing in the face of Batman’s supposed death in Catwoman #40.

Ram V’s choice of villains also creates some odd dissonance in the story found in Catwoman #33– Cheshire and Firefly seeking a second chance rings hollow when contrasted with Croc, Nygma, Knockout, and Karlo, all of whom had very carefully constructed redemption or anti-heroic arcs in stories as varied as Batwoman and Gotham Academy, Streets of Gotham, Secret Six, and of course James Tynion’s recent run of Detective Comics. Hopefully, he will give some motivation for these two formerly insatiable sociopaths – Cheshire probably has a rich thematic route through the appearance of her daughter Lian (Shoes) – but a redeemed villain that easily turns to the good doesn’t usually make for a good story.

Fernando Blanco returns to main art duties, providing beautifully shadowed and neon inner-city scenes, a brutally effective knife fight climax, and of course, the heart-stopping final page. On a technical level, the book does have some annoying spelling errors (sadly common to Catwoman runs, see also the Valentine run) such as the misspelling of “precinct” as “precint.” Hopefully editorial will devote enough time and energy to really make this book equal to the quality of its art and writing on a technical level.

Yanick Paquette’s beautifully composed main cover shows the conflict between Catwoman and Father Valley – the symmetry of their joined hands, their attacks on each other’s heads, their intense expressions, and the negative space of the background blending in with their black outfits all create a wonderful image. Jenny Frison provides a serene image of Catwoman and Poison Ivy wrapped up in thorny rose stems, smelling the flowers, in a creative exploration of one of the other major relationships Ram V is exploring.

Ram V and Fernando Blanco serve up an exciting, explosive conflict in Catwoman #33, though the road leading here comes across as underbaked.