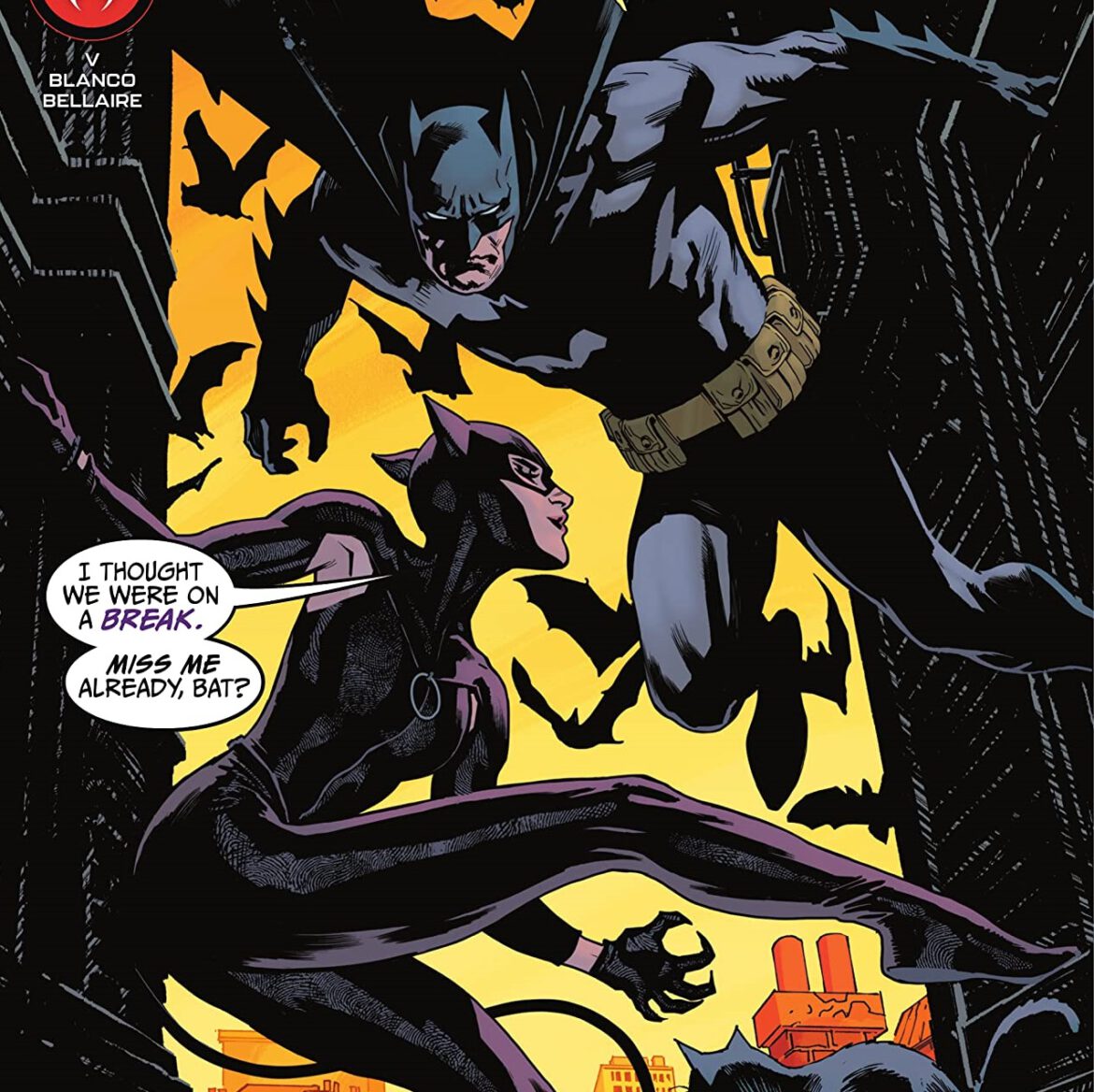 Overview: After a brief respite with Batman in Catwoman #34, Catwoman faces Father Valley once again, but her defeat this time may be more severe than even the last.

Synopsis (spoilers ahead): On a rooftop in Alleytown, Bruce holds Selina carefully after rescuing her from death by stabbing and drowning in the last issue. Batman reveals that Detective Hadley told him Father Valley’s attack was imminent, precipitating his rescue. Bruce gives her a drive on Father Valley (see Catwoman 2021 Annual #1), and Selina tells him about finding Ivy in Simon Saint’s labs, then disappears after some flirtatious banter. After pondering on the information Bruce gave her, Selina finds Valley again, and they battle with swords.

Hadley investigates the ruins of the church Valley destroyed, and finds a map, leading to him rushing across town.

Valley reveals his plan – Selina must beat him to stop his automated sniper shot which will kill her sister Maggie, and though she does manage to defeat him, he jumps away from the skyscraper with a parachute, while the sniper rifle goes off, hitting Hadley who is shielding Maggie with his body (deduced as Valley’s target from the map), while Selina is trapped in an explosion.

Analysis: Ram V’s been setting up Hadley for devastating disappointment for his entire run – he clearly has fallen badly for Selina, but Selina’s heart just as clearly belongs to Batman, as this issue shows intensely in its opening.

The cover’s painfully stupid text bubble highlights the “break” that Batman and Catwoman are on, but it also seems to ask some questions about why Batman has time to rescue Catwoman, but not figure out the ridiculous death-trap Father Valley has set. While emotionally very effective, there is a little bit of ridiculousness about the way Ram sets up the plot here – even if Maggie is very predictable, setting up a sniper rifle to shoot her in the same place from a huge distance does not work, since a person simply doesn’t sit in the exact same spot without moving every day, even a person of regular habits and the slightest fraction of a difference is magnified by the distance of the sniper rifle. Added is the effect of wind and the many other factors in long-distance shooting, and the idea of a preset rifle simply makes no sense at all, leading to the climax of Catwoman #34 feeling more than a bit arbitrary, an unusual problem in the normally much more tightly plotted Catwoman title as of Ram V’s tenure.

The passage of time also seems like a bit of an issue – Catwoman nearly died in the last issue, and seemingly in the same night, she is fighting with a sword against the same enemy. Sure, you can argue that Batman does the same kind of ridiculous damage absorption, but if this reviewer were writing reviews of the Batman title when that happened, you’d hear about it there too (and you heard about it when Tom King did it with Batman walking across Siberia when the cold killed three Batplanes on the podcast, too). These somewhat serious flaws aside, the opening is seriously intense, the dialogue capturing the passion these two have for each other and their playful affection as well, while Fernando Blanco’s art once again captures the raw chemistry between the Bat and the Cat.

Yanick Paquette provides the main cover for Catwoman #34, with Batman and Catwoman forming aggressive and seductive shapes of black against a yellow background, slightly ruined by the obnoxious text bubble from Catwoman. Jenny Frison renders a breathless almost-kiss between Batman and Catwoman on her variant, steeped in pinkish red, while Steve Lieber provides a humorous Polka Dot Man dominated The Suicide Squad tie-in cover.

Ram V provides a satisfyingly intense, but sadly brief, Bat/Cat reunion, and ramps up the tension in a flawed by nailbiting combat ending.