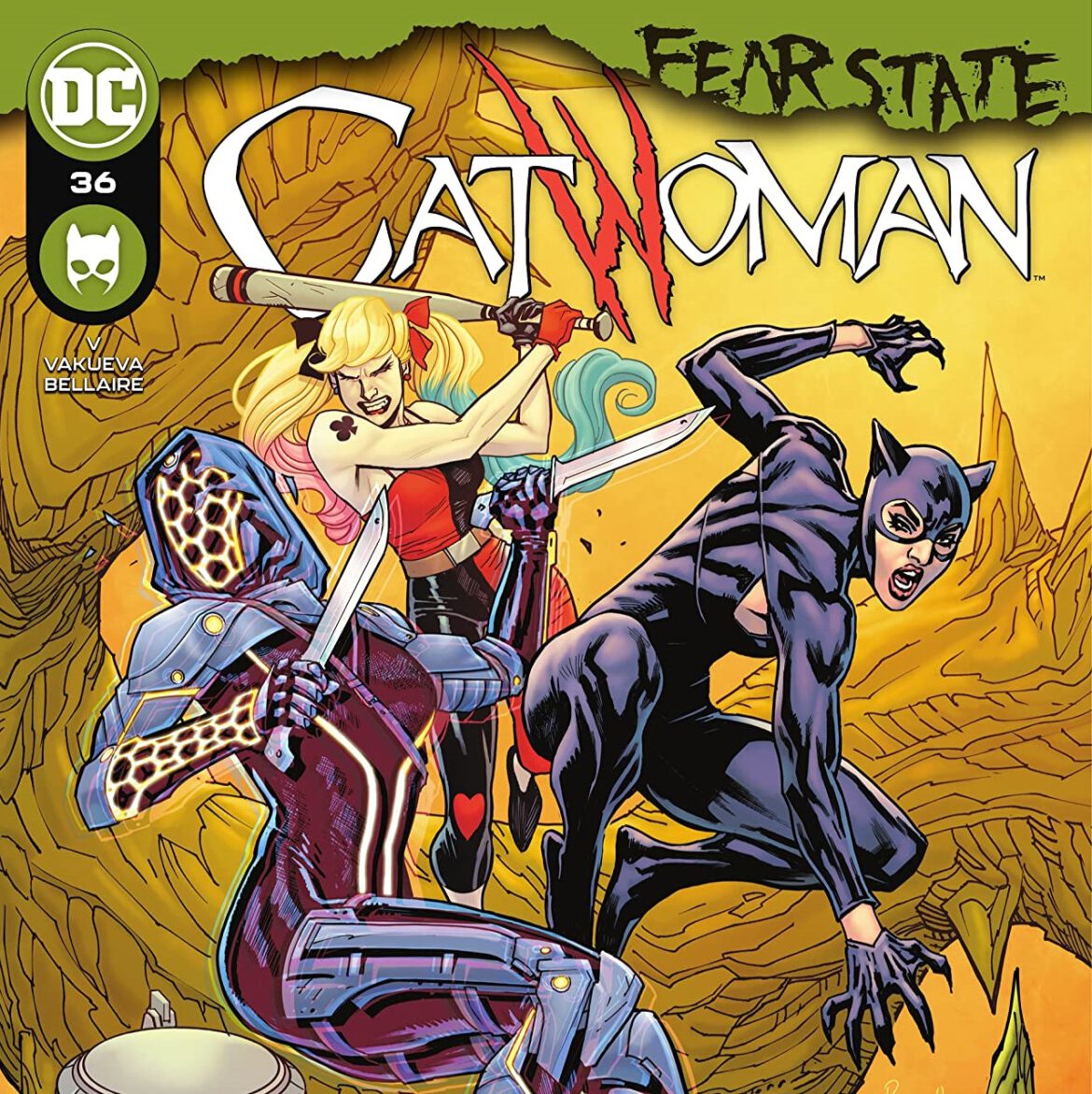 Overview: In Catwoman #36, Catwoman gathers her allies in Alleytown for one last heist, which turns into a potentially fatal last stand.

Synopsis (spoilers ahead): Catwoman #36 begins in Alleytown, with the Magistrate deploys, led by the Wight Witch. They are commanded to capture or kill Poison Ivy and Selina Kyle. At the same time, Selina and her protégé, Shoes/Cheshire Cat (Lian Harper), coordinate with the Riddler to move Ivy out of Alleytown, but Eddie betrays them to Penguin in revenge for Selina’s theft during Joker War.

Elsewhere in Alleytown, Firefly, Cheshire, Clayface, Killer Croc, and Knockout battle the Magistrate. They are joined by Harley Quinn and the Gardener. Catwoman arrives, telling them the plan for her one last heist. She plans to get Ivy out of Alleytown, and everyone else will be under siege until help arrives – with herself as a sacrifice to keep them safe if help doesn’t come in time. Selina, Harley, and Gardener make up a vicious last stand against the Wight Witch, while the Riddler guides a shell game of trucks taking Ivy away. Harley manages to fall the Witch, but the Magistrate activates two more.

Analysis: This is Ram V’s middle issue of Fear State, and it’s two issues before the end of his run. Very elegiac tone, particularly in the exchange between Selina and Shoes. The plotting is a little bit sketchy between Catwoman’s “Prestige”-esque narration about con jobs and heists and what we actually see happening (Catwoman describes it as a siege, but it’s more like a last stand in actuality), but the emotion and action are both written extremely well. Though we know Ram V is making the decision to end the run on his own terms, the way he’s shuffling between his carefully, slowly setup main villains Father Valley and Wight Witch seems overly hasty – there seems to be no real reason that Valley has left, and we still don’t have a solid grasp on who Wight Witch is or why she acts for the Magistrate. And though it’s really great seeing Ram V expand upon James Tynion and Mariko Tamaki’s Simon Saint villain character, the entire Alleytown plot feels a bit too disconnected from the main Fear State crossover, even though this run of Catwoman has contributed the crucial plot point of the second Ivy. We don’t have a good idea of how Harley’s gotten from her own book to Alleytown, or how Catwoman’s struggles with the Magistrate connect to the troubles in central Gotham and Batman’s main teams. As a whole, it does seem like Tynion’s ability to coordinate the Bat-titles is faltering a little bit, but perhaps the ending of Fear State will tie everything off with a fairly neat bow. Whatever the case, we will have been witness to one of the stronger runs of Catwoman, with complex, challenging plotting, lovely poetic writing passages, and crucial coordination at key points with the main Bat-Books. I hope it’s well remembered.

Nina Vakueva and Laura Braga fill in on art for Catwoman #36 for the still missing main series artist Fernando Blanco, who’s been given other gigs such as Detective Comics, so he may not return for the final two issues. A real shame, given how consistent, appealing, and clever Blanco has been in his panel choices, acting, and costuming. Vakueva and Braga’s style mesh reasonably well, though Vakueva’s penciling seems much less assured than Braga’s, leading to some somewhat out of control face shapes in the early parts of the issue. One does wonder if the changes required by Tynion and Ram V leaving the Bat-office either de-prioritized their books, leading to last-minute fill-in artists (Bengal filled in for Jorge Jimenez in this week’s issue of Batman) or if their stories were changed by editorial at the last minute, requiring additional art help without time in the schedule for the main artist to finish it. Whatever the case, it’s not a great sign that DC is once again slipping in art scheduling and assigning multiple artists to one issue. Hopefully, the next two issues of Catwoman will be a return to a single, strong artist to match Ram V’s very strong writing.

Yanick Paquette provides a very fitting main cover of Harley and Catwoman fighting Wight Witch over a helpless Poison Ivy, for once really symbolizing what’s going on in the book, even including one of the Magistrate’s flying saucer drones. Jenny Frison’s variant is Harley Quinn with just one cat reference on her hammer – a lovely image, but not quite as fitting, even though Harley does appear in the issue.

Ram V pens the middle issue of his Fear State arc as a brutal final stand, ending by doubling the problems our heroines must face - just what you want in the lead-up to an event tie-in finale.