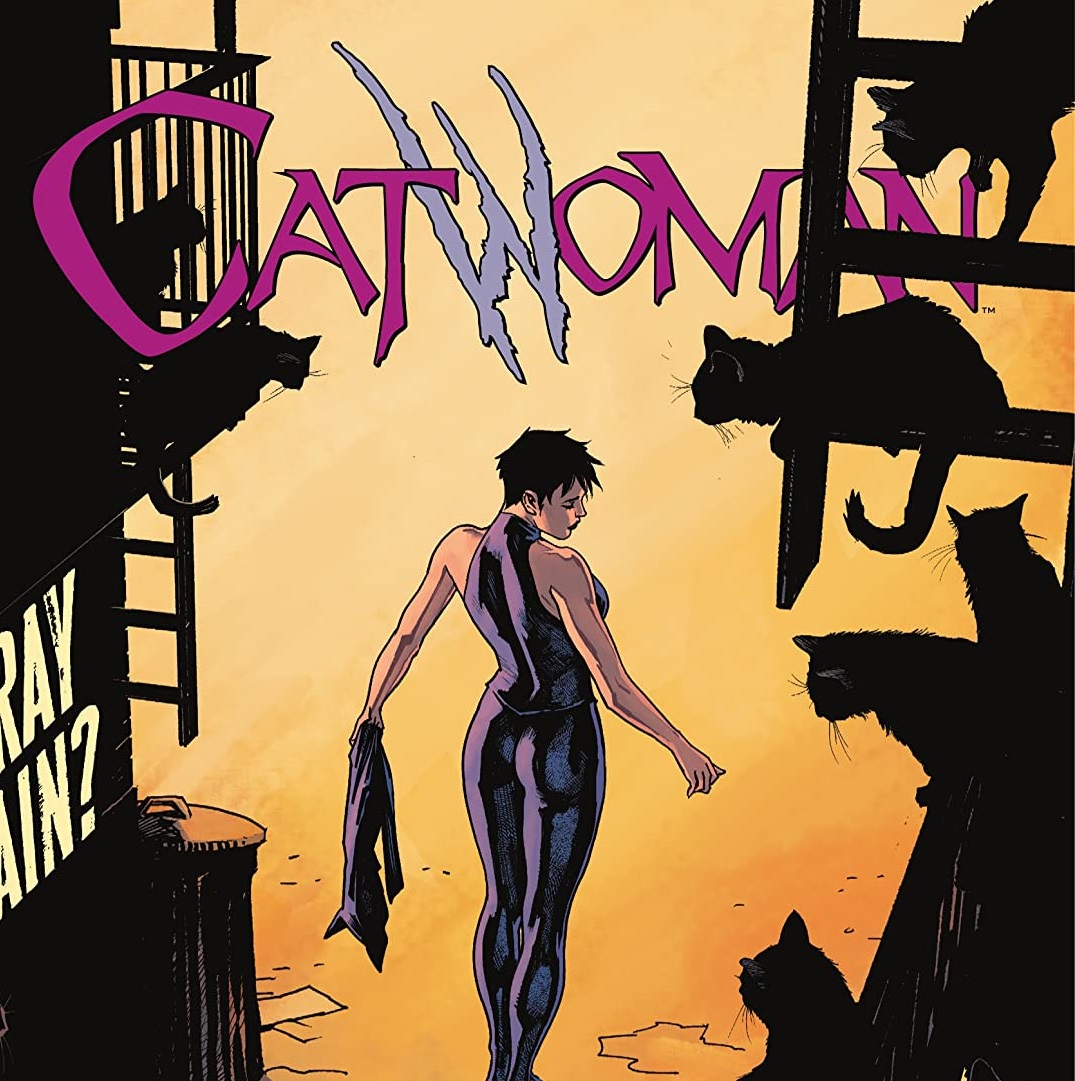 Overview: After a dark and brutal run as Queen of Alleytown, Catwoman doffs her crown in the police interrogation room…but all is not as it seems in Catwoman #38!

Synopsis (spoilers ahead): Catwoman #38 begins as the Strays lead a protest/rally for Catwoman outside of the Alleytown GCPD building, Detective Kollak leads Detective Rigs to interrogate Selina, who is waiting with her lawyer. She claims complete innocence, answering Rigs’ questions about attending Detective Hadley’s funeral, where we, the audience, see a tense farewell between herself and Hadley’s killer, Father Valley, who has renounced his vow to kill her because of the accidental slaying of the detective. Valley, instead, warns her not to cross his path again. Her lawyer gets a phone call and steps out, and Selina then claims Ghost-Maker and Wight Witch were fighting each other; Selina just watched, discovering that the two techno-ninjas knew each other! Kollak is called away, and Rigs continues questioning her about the surveillance devices the Strays placed all over Alleytown. Selina blames the Riddler and the Penguin.

Elsewhere, we see the villains who helped Catwoman doing some cleanup of Alleytown, and Chesire approaches Shoes, introducing herself to her daughter.

Selina also announces that she’s leaving Alleytown, giving the Nest back to the Strays, and telling Rigs to make sure that the schools are ready to give them what they really need. She prepares to leave, but Kollak storms back in, knocks out Rigs with a punch, and marches Selina out at gunpoint. We then discover that this “Kollak” was actually Clayface, who was also the lawyer and the cop who called the real Kollak out of the room! Rigs closes out the issue with some classic noir narration, mentioning several possibilities of where Catwoman went – to see Maggie, to live the high life with Bruce, to prowl the rooftops with Batman – but most likely he’ll see her again in Gotham.

Analysis: After the beautiful and elegiac farewell to Alleytown from Selina herself in the last issue, as Ram V wrapped up his Fear State tie-in arc, we have his actual final issue, where he plays one last con, one last time, using more lovingly deployed noir tropes of bent cops, femme fatales, and tough street kids – all with that Gotham twist that makes it uniquely Catwoman. Catwoman #38 is a LOT lighter than the last, partly because it doesn’t have to deal with the weight of the crossover and partly because of the lovely, clean-lined art by Caspar Wijngaard (drawn AND colored! Quite impressive!) Wijngaard is a great substitute for Fernando Blanco, who’s moved onto the backup feature for Detective Comics in the weekly Shadows of the Bat event starting in January 2022. Both have a truly wonderful noir style, a strong sense of action and paneling, and Wijngaard provides glorious pink and green neon tints throughout that really capture the feel of Ram V’s entire run.

Despite his careful plotting here, V doesn’t wrap everything up in Catwoman #38 – he gives a plausible answer to why Valley and Selina’s conflict is at a halt, at least for now, wraps up the Alleytown police department, and reunites Cheshire and Lian (though it frustrates me intensely that Lian and her father Roy Harper have no apparent connection forthcoming, while her mass-murdering mother gets this tenderly written moment). He wisely leaves plenty of room for incoming writer Tini Howard, setting Selina on her path back to the main parts of Gotham while Batman is off in Joshua Williamson’s run. I think, in the end, though his craft is equal to such excellent runs as Valentine’s or even Brubaker’s runs on Catwoman, there’s a sense that a large number of plotlines really ought to have been developed more in this run itself. Though the decision to leave is apparently driven primarily by Ram V himself, and he will be developing things like Ghost-Maker and Wight Witch’s connection in the Urban Legends anthology, the pacing of the Valley and Wight Witch threats to Catwoman and how they were resolved doesn’t quite sit well with how deliberately and carefully he first introduced these two terrifying villains. But on the whole, the emotional power and deliberate craftsmanship that Ram V deploys in his Catwoman run make up for the pressures of a monthly comic, which, after all, always leaves something undone, since the title must go on. I bid a very grateful farewell to him, look forward to more, and bid Tini Howard welcome.

Main cover artist for several issues, Yanick Paquette provides a delightful farewell cover, with Selina leaving the Alley, surrounded by black cats in strong shadow, leaving cat-paw-prints behind her, as she holds her cowl/jacket combo. Jenny Frison provides our cardstock variant, with Catwoman sitting with a self-satisfied expression in front of the Bat-signal, the intense light behind her highlighting the noir feeling, and wearing a more corset-style costume than expected!

Ram V provides a cheeky and whimsical noir ending to his run on Catwoman in a police station, one last con, with truly lovely art and colors both by Caspar Wijngaard. Not all loose ends are wrapped up, but a satisfying time is had by all.