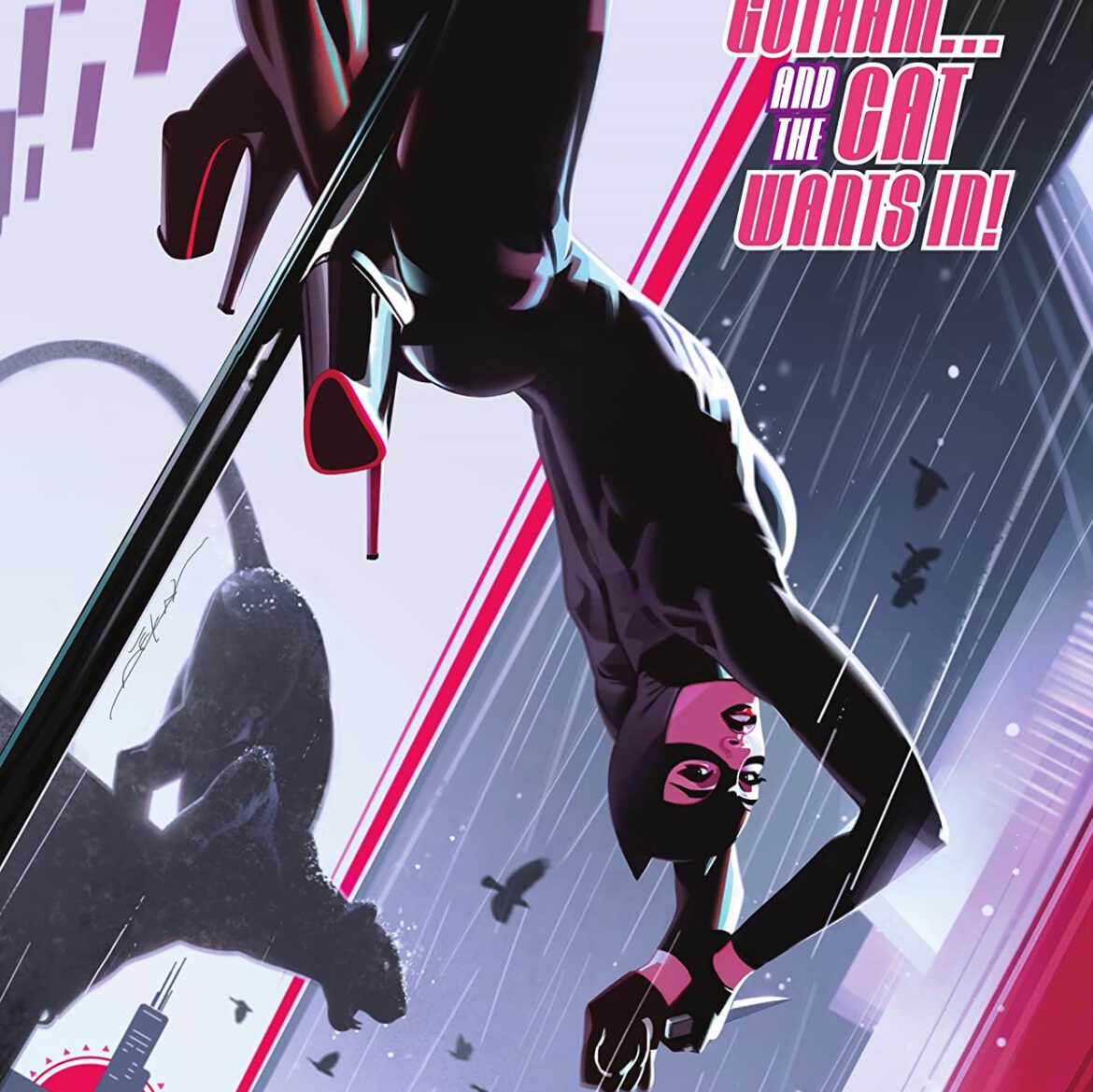 Overview: In Catwoman #39, Catwoman opens her campaign against the mob in Gotham, but the mob has some surprises waiting for her.

Synopsis (spoilers ahead): As Catwoman #39 begins, Selina narrates an introduction to the Big Four mob bosses – Finbar Sullivan, Dragos Ibanescu, Federico Tomasso, and Eiko Hasigawa, as they fight over port access in a strip club – which Selina infiltrates as a dancer until she attacks.

One week ago, Selina monologues to herself about moving from Alleytown to Gotham City proper, then calls on Eiko’s yacht, asking for help. Though Eiko rejects Selina (both romantically and her plan to fight the mob), she does drop a clue – the Trixie, a building housing the mob’s women. Investigating the building’s “closed” ninth floor, Selina meets a mysterious masked figure with a very expensive cat on the rooftop, and the man easily provokes her into a fight after offering her membership in his association of the world’s greatest thieves.

Later, Selina infiltrates a spa day with the Big Four’s women – including Eiko’s girlfriend Grace. We then flashback to the present, where stripper-Catwoman declares that their mob wars cannot have collateral damage. She displays her leverage over their women (wives, daughters, etc), but Black Mask arrives with a submachine gun. Catwoman’s dancer friends save her from Black Mask and the three climb to safety. Selina notices the Big Four don’t help Black Mask and deduces that they want her to keep him in line.

In her skyscraper apartment with her new expensive cat, Selina receives a gift from the masked man, signing himself Valmont.

Analysis: It is perhaps unfair to Tini Howard that she’s taking over the Catwoman title after just over a year of one of the best Catwoman runs of the past decade. Ram V’s run had a few flaws (largest among them the tendency to be extremely emotionally cold), but it was a tightly plotted, dark noir crime story that highlighted Selina’s appeal and skills. Howard opens splashy and with an enormous, energetic attitude – and that’s good, as it’s the strongest element of Catwoman #39. The original characters are pretty stock, though her masked Thieves’ Guild representative Valmont at least has an evocative entrance, her handling of Black Mask is annoyingly stupid on both Catwoman and Mask’s part (Selina having no idea Mask is a player, Mask being basically just a rabid dog who likes to kill cats), and while I really appreciate the return of Eiko Hasigawa, she has none of the character that Genevieve Valentine imbued her so careful within her year-long run seven years ago.

Where Eiko began as a complicated, torn woman, with impulses to protect those she cares about and looks at her father’s yakuza business with mingled ambition and horror, Howard portrays her as simply a lesbian mob boss, a tough chick striving to make it in a man’s world. Valentine definitely played with that theme all the way through her run, starting each issue with quotations about historical powerful and deadly women, particularly Lucrezia Borgia, the themes and characters were full of nuance, drawing you in emotionally while they made choices good, bad, and mostly awful. Howard relies on her brash and pungent voiceover to set character and tone to stand out – and while it works, it also casts the book in a deliberately, stridently obnoxious light. (Side note – Howard, based on this issue and solicitations, is bringing back a lot of characters from the past in her run, but I’m more than slightly salty that Selina’s fiercely loyal and brave cousin Antonia from Valentine’s run is being ignored. To be fair, Frank Tieri did put her in jail in his follow-up to Valentine’s run, but that’s hardly stopping anyone from being used.)

Howard’s dialogue for Selina confronting Eiko sadly strikes me as pathetic, a frustratingly low-quality stumble compared to her much more self-assured if snotty, voice-over. The new villain provoking Selina into a fight so easily, and Selina gaining nothing also rankles – it doesn’t give any sense of competence or self-control, despite the attempts to show her detective skills by constantly using voiceover to show how much she notices. All the observation in the world means nothing if someone else can manipulate you – just ask Irene Adler. Additionally, Catwoman is taken out way too easily by Black Mask – perhaps to show she’s surprised, perhaps to have a foe worth defeating, but it’s of a piece of her talking bigger than her walk.

Taking over from Ram V’s main series artist Fernando Blanco (currently on the backup stories in the Shadows of the Bat event in Detective Comics), Nico Leon’s art reminds me a bit of David Messina’s art from the second half of Valentine’s run – a bit unpolished, a bit flatter, suited to a noir style reasonably well, but not terribly impressive. Some good layout work, though, keeping reading interesting. Jordie Bellaire’s colors cannot completely compensate for the rougher pencil work, but it does drench the book in style and atmosphere, really catching the brash but shadowed noir tone that Howard strikes.

Jeff Dekal steps into the role of main cover artist for the series, really highlighting the sex appeal of Catwoman with the stripper heels, pole, and pose – including some humor and drama as well, with the panther gargoyle and the birds flying through the rain in the background. Jenny Frison carries on with her variants, this time highlighting Selina’s complex relationship with Batman by having a mysterious-looking Catwoman holding an empty Batman cowl. As the first issue of a new run, even though DC isn’t renumbering, they’ve launched Catwoman #39 with a one in twenty-five incentive variant (meaning the shop has to buy twenty-five copies of the main cover to be able to buy the incentive variant) by artist Sozomaika, featuring Catwoman crawling over a pile of diamonds against a black background, highlighting the slick sheen of her costume and the sparkles of the diamonds. Nice, though I wouldn’t consider it worth the $10-25 price tag the stores will likely charge because of the incentive nature of the cover.

Though Howard’s tone is clearly deliberately reaching for the effect it achieves, when contrasted to Selina’s actual performance in the book, it falls short of what the book could be, aided by competent but not spectacular art bolstered by stellar coloring.