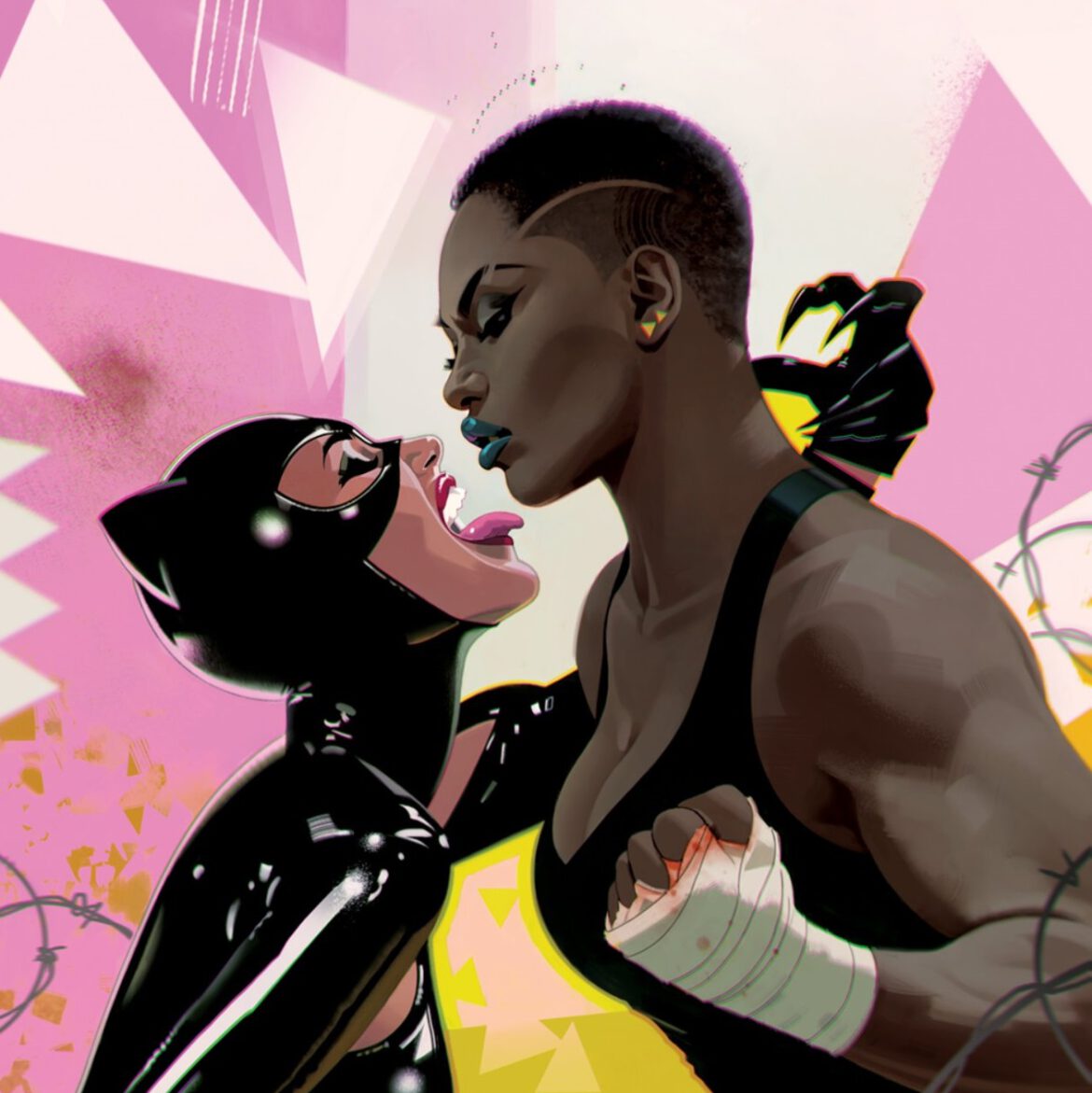 Overview: In Catwoman #41, Catwoman allies with League of Assassins member Onyx as the complications in her war against the mob grow deeper.

Synopsis (spoilers ahead): As Catwoman #41 begins, Don Tomasso dresses down his son Dario and Dario’s secret lover/right-hand man Noah for the death of two of his men (at Valmont’s hands from the last issue). When Dario throws out the murder of Kristi, one of the Don’s mistresses, killed at the Don’s orders to keep Catwoman in line, Tomasso rages at him with misogynistic threats. Dario leaves, while Noah continues to cement his position as a replacement son.

Valmont and Catwoman wait for Valmont’s associate, Flamingo, to pick up the bodies of Tomasso’s men. Disgusted at Valmont partnering with a cannibal like Flamingo, Catwoman swings away, watching from afar as Onyx, from the League of Assassins, attacks. She intervenes to save Valmont’s life and walks away to parlay with Onyx in Little Tokyo. They dance around each other’s missions and Onyx’s distrust of Selina (who can blame Onyx, though her dislike of murderers seems more than a bit rich from an assassin). Selina leads Onyx to the rooftops next to the Trixie mob hotel for side chicks, where they see Dario planting a bomb. Selina stops him from killing his father and Black Mask and turns him to instead attacking the Sullivan mob. Onyx and Catwoman break the hands of Sullivan’s best boxers, hurting him financially. Dario attacks the guards outside of Sullivan’s gym, exposing his alliance with Catwoman as the three escape together.

Black Mask meets with Tomasso, Eiko Hasigawa, Dragos Ibanescu, and Sullivan, and tensions run high because of Catwoman’s attack on Sullivan. Black Mask bullies the group to put out a hit on Catwoman, with only Eiko disagreeing, saying she does not fear the Cat.

At Catwoman’s apartment in the Trixie, Dario, Onyx, and Selina eat sushi. Onyx leaves, warning Selina that Valmont is no good. Dario takes a nap on Catwoman’s couch (since she’s hiding her identity from him still, even though he passed her test), and she tries to encourage him that life as the gay son of a homophobic mobster can be longer than he thinks, a touching moment. However, while Dario sleeps, Eiko’s Yakuza sneak in.

Analysis: Tini Howard continues her new run on Catwoman by once again introducing a blast from the past – Onyx, whose last major appearance was the ill-executed debacle of a Batman event called “War Games.” Though Batman’s respect for Onyx indicates that she has integrity and some moral strength, it’s still a bit off to have a literal assassin complaining about Valmont and Flamingo being murderers. The somewhat stereotypical dialogue Howard writes for Onyx also doesn’t quite help, though she’s certainly got miles more character and interest in Catwoman #41 than Eiko’s generated in the previous three. Selina comparing Onyx to Bruce as a romantic interest continues Howard’s depiction of Catwoman as a creature of unchecked, undisciplined impulse – a frustrating impression only enhanced by the way Howard writes Catwoman agonizing about spending time with Valmont. In general, Howard’s Selina continues to emerge as feckless, passionate but without much forethought, and too often even composure, as Valmont and Onyx both cause her to completely lose her cool.

Nico Leon’s rendering of Selina’s facial expressions and shapes are a bit overly loosely handled – once again giving the feeling of an artist not quite ready for a full solo run on one of DC’s highest-profile characters. Though to be fair, both of the artists for Genevieve Valentine’s run occasionally employed less-than-tight pencils – perhaps for effect, but more often giving the impression of inconsistency and a bit of haste. Veronica Gandini’s colors do a whole lot of lifting, drenching the book in shadow and silhouette that makes it more effective than the simple pencils would on their own. Some awkward computer-generated buildings and other props (like Dario’s bomb) give the sense of a book that wants to have a bit more style than it can pull off just yet. Overall, the combination of art and writing gives the reader a package of striking potential but with many details that keep holding it back from being a fully enjoyable and competent read. Hopefully, the intrusion of the strikingly colorful Yakuza into Catwoman’s apartment on the final page will finally develop Eiko back into the complex, compelling character Valentine created in 2014.

Jeff Dekal provides a striking, if punky attitude (and personally extremely off-putting) tongue-sticking-out Catwoman facing a powerful and stern Onyx, using his shiny, digital painting style. Tula Lotay provides a traditionally posed Catwoman leaning back, relaxed, and arched back against a red background – very dramatic coloring, surrounded by three black cats for the cardstock variant. Jenny Frison ties into The Batman movie with a Zoe Kravitz-style stocking mask with ears, rendered in her typical vivid purple. Sozomaika paints the 1:25 ratio variant for Catwoman #41 with Catwoman holding a hoop against a black background – a bit simplistic compared to the other covers and surprising given that it’s an incentive variant. Dani’s International Women’s Day variant shows us a dramatic Catwoman standing on a glass roof, painted from below, with her feet cracking through the “glass ceiling” (though in reverse, presenting an odd symbolism if you think about it). Interestingly, Greg Horn provides two art exclusive variants, both featuring an Anne Hathaway-inspired Catwoman, one in front of the Bat-signal, one clinging seductively to a shadowy Batman, holding pearls behind her back. One thing’s for sure: DC has only increased the number of covers it’s using as marketing. While many of them have a lot of artistic merit, it’s disappointing seeing this tactic deployed so relentlessly.

Howard and Leon continue to provide an occasionally competent but still very frustrating depiction of a Catwoman who we are assured is “focused” but continually demonstrates her lack of focus in the multiple failures she racks up.