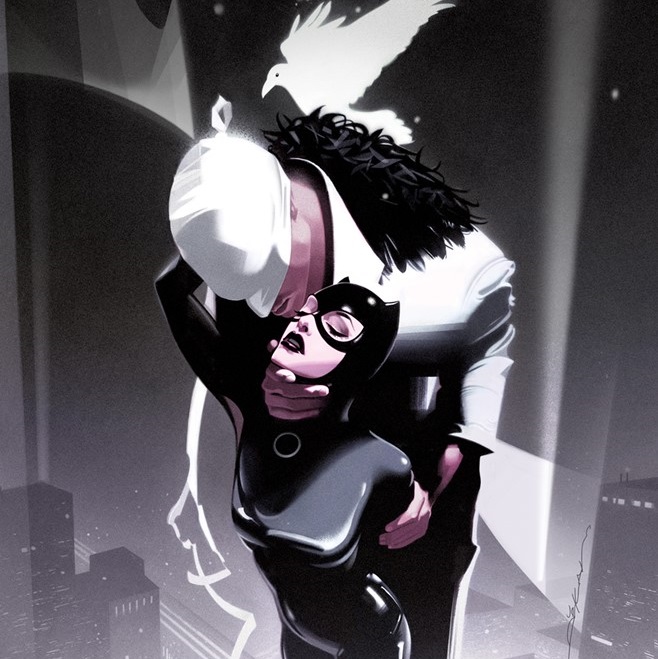 Overview: In Catwoman #42, Selina Kyle faces down both Eiko’s Yakuza and Black Mask in a daring heist play.

Synopsis (spoilers ahead): Catwoman #42 begins in the Year One days when Selina Kyle and Holly Robinson worked as strippers, as Selina comforts her roommate and promises to burn any man who hurts her. Skipping to the present, Selina wakes as Eiko’s Kobun (Yakuza muscle) fires a warning shot into her pillow. One of her cats distracts the Kobun, so Catwoman and the Yakuza fight in her apartment, as her Tomasso defector tries (and fails) to help. Ending up in a standoff, the Kobun tells Selina that to get Eiko’s vote against Black Mask’s hit on her, she must persuade two of the other five to vote against Roman Sionis first – and Selina recognizes the leader as Eiko in disguise.

The next day, Selina and Dario plan over lunch, and she heads off to recon Black Mask’s organization by pickpocketing his secretary. That night, she stalks Valmont, who had stalked her and Dario disguised as a waiter in the day. She views Valmont dismissively as an asset, a follower, and assigns him to forge a vital component. Sneaking into Mask’s office while his teeth are being done at night, she steals from right under his nose.

The Five leaders meet with Sionis for the vote on Catwoman’s life, but Catwoman stakes herself out as bait…wearing Black Mask’s mask, claiming he is wearing a forgery, knowing he won’t risk damage to his prized mask made from his father’s coffin. She throws the mask in the air and blows it up, then grabs Sionis by the neck with her whip, humiliating him in front of his men and causing a psychotic break as Eiko’s Yakuza appear around the gang. Later, Selina mourns Kristi, the girl who helped her in the first issue and was slaughtered by Tomasso’s men, incited by Mask.

Analysis: Tini Howard and Nico Leon, joined by new colorist Veronica Gandini, continue their grimy crime tale of Catwoman vs. the mob and Black Mask in this cleverly plotted chapter in Catwoman #42. Basically a tropey but decently executed shell game, using Black Mask’s mask as the pea, Selina manages to take Mask down a peg in reputation and psychologically, though it doesn’t appear to have materially changed anything, just another notch in the best of metaphorical whip-measuring between the two costumed figures in the noir setting of Gotham’s underworld. I use the double entendre of “whip-measuring” on purpose, as Howard continues to push hard at the “all men are scum, all women are part of the sisterhood who fights them” framework she’s laid down since the first issue. The structural device of the flashback to Selina and Holly in the first page and the final page spent grieving a Holly surrogate in Kristi is well conceived, but unlike Holly, we have no history of love or affection between Kristi and Selina, making the intensity of the scene fall flat, despite Howard’s intelligent structure and Leon’s mostly effective art for the two pages.

The continued flirtation between Selina and Valmont drags on frustratingly, though at least Selina finally demonstrates her competence in beating Valmont and devising a plan for him, rather than being surprised, beaten, and helpless in the face of Valmont’s obsession. An improvement, to be sure, but it does make the last several issues of Selina struggling to get the upper hand over the men around her feel a bit arbitrary. Nothing changed between the last issue and Catwoman #42 to give Selina the needed confidence or skill boost to beat people she struggled to beat before, though one could argue that the victory achieved was a small or even false one – short term gains for a long term loss – but that’s not how the issue itself presents it. All in all, the issue takes a step forward in providing classic Catwoman enjoyment but continues to frustrate in the search for a coherent throughline for the run.

The art also provokes a duality of reactions. While Nico Leon’s face and figure work is still solid enough, the switch in coloring doesn’t change the fact that large portions of the texture are provided by the colors, not the pencils. The opening fight presents deeply confusing action and blocking – people go from standing to lying down with no transition, and then they stand again and are in completely different parts of the room in the very next panel. Frustrating closure (reading between panels) can be a profitable exercise when done deliberately, but there’s no sense that Leon is doing this on purpose, merely providing shots that evoke emotions but don’t present any real sequence of action.

Jeff Dekal again provides the main cover, a lovely, almost chiaroscuro (black and white effect) piece with Catwoman leaning back in romantic ecstasy against Valmont – a bit of an overstatement of what happens in the book itself, but it’s a gorgeous image. Jenny Frison gives us an almost explicitly BDSM mistress image of Catwoman with a lacy mask, whip, and extremely specific underwear showing through a sheer black body stocking for the cardstock variant. Sozomaika chips in once again for the 1:25 incentive cover (which I recently discovered was selling for significantly more than other 1:25 variants, for no reason I can make out), giving us a characteristically shiny Catwoman perched provocatively on a building with searchlights behind her. All three definitely capitalize on Selina’s sexuality in different ways, which is extremely interesting given how little actual romance and sex Selina is having in the book itself (strange flirtation with Valmont and possibly Eiko aside).

Unmotivated character work and incoherent action layouts drag down what is at heart a fairly clever, if well worn, shell game plot.