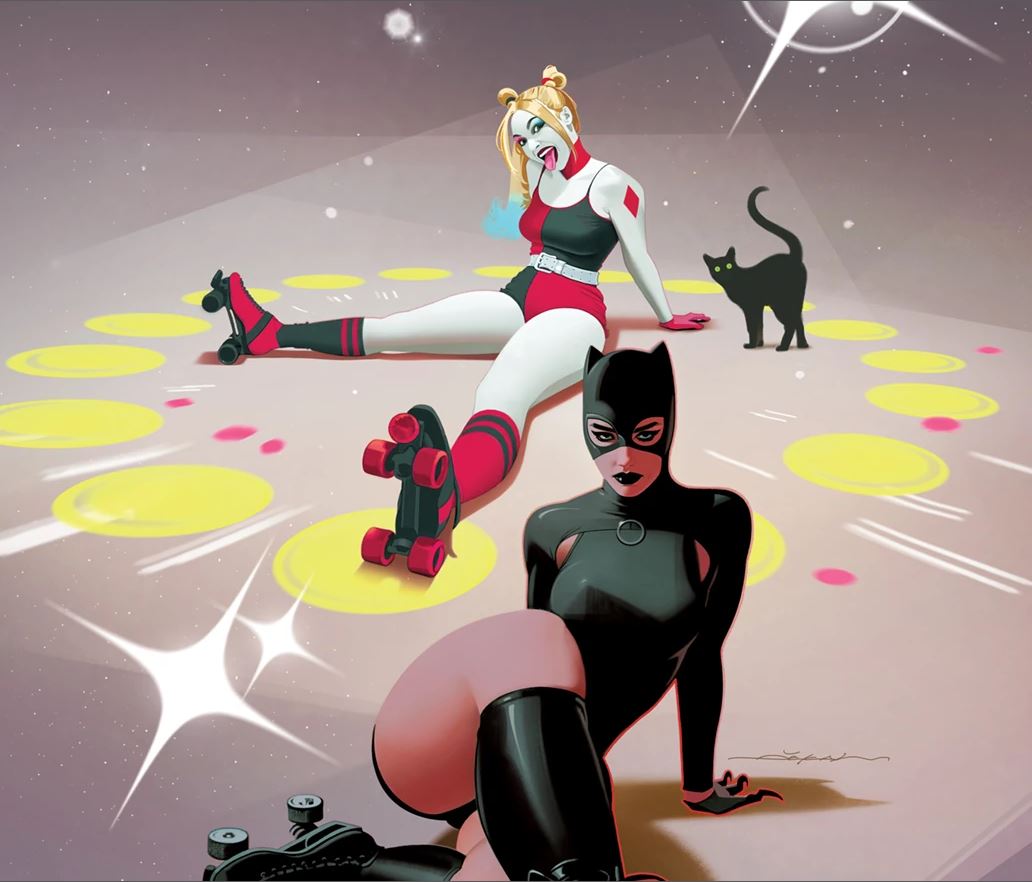 Overview: In Catwoman #43, Catwoman invites Harley Quinn on a road trip after her strike against Black Mask, but finds new trouble ahead.

Synopsis (spoilers ahead): As Catwoman #43 begins, Don Tomasso pledges loyalty to a psychotic-broken Black Mask, who orders him to kill Selina in revenge for destroying his mask in the last issue.

Meanwhile, Selina hits the road with Harley Quinn, stopping at a gas station to get snacks and fuel, but they are rammed by a red car when they get back on the road. Selina and Harley manage to force their attacker to drive off a bridge. Then they crash together in a motel, where the driver of the car attacks Selina while Harley is playing with the ice machine, but beats off the attacker, sizing him up as not one of Mask’s stone killers. Harley and Selina fall asleep in the same bed, but Selina makes no further moves on her friend.

The next day at the roller derby, Harley insists on Selina joining her on the team, but before the match, Selina is confronted by Red Claw in the locker rooms…

Analysis: Tini Howard is joined by guest artist Bengal for the start of a two-part “vacation/road trip/buddy comedy” interlude arc in Catwoman #43. Though the first page maintains the menacing tone that fits Black Mask and the dark crime story Howard’s been telling for the last several months, the rest of the issue focuses much more on a whimsical, light, and colorful style fitting Bengal’s usual type of comic. It’s a bit of a far cry from Niko Leon’s unpolished but more realistic and noir-inflected pencils, but it definitely suits the inclusion of guest star Harley Quinn. Bengal, with his trademark energy, very well handles the various action scenes and character moments, and while it would be nice to be able to go a full year without an art change, it’s nice when the writing shifts to suit the style as well as it does here.

Howard’s writing shifts from the hard-edged (and blitheringly incompetent) Catwoman narrative that’s characterized her dealing with the mobs to a more elegiac, wistful, and regretful voice when she narrates her affection for Harley. Harley’s voice is pretty dead on – Howard seems likely to have communicated with current Harley writer Stephanie Phillips, at least demonstrating a solid grasp of Harley in general (to be fair, Harley’s distinctive speech patterns and energy are very well known, though Howard does a better than average job with them). Harley is clearly the “good angel” on Selina’s shoulder, a breath of fresh air after all of the darkness she’s dealt with recently. That fits reasonably well with Phillips’ writing of Harley as on a journey of redemption, not driven by the darker passions that characterize her relationship with the Joker.

The handling of the plot for this interlude, unfortunately, continues the pattern of incompetence Catwoman has demonstrated since Howard took over the book. Perhaps the art highlights the Red Claw too much, but it feels very much like Selina misses far too much. To be fair, Howard does deliberately write Selina as saying she’s letting her guard down – but when Selina’s consistently been caught off guard or beaten over and over again by so many characters (particularly Black Mask and Valmont) in the past arc, continuing that pattern while saying it’s different in the narration leaves more frustration. Additionally, while it’s a fun, smaller stakes story with a lot of fanservice (from the road trip to Selina’s attraction towards Harley to the roller derby), the story so far doesn’t justify the break we’re taking, except possibly emotionally, given how intense the crime and consequences have been up to this point. And while it might be nice to have a bit of an emotional breather with a fun, bright character like Harley Quinn, the shorter nature of this interlude arc makes it stand out. It makes it likely to be remembered as perhaps an improvement in some ways to the main narrative arcs of this run, as the series so far has been so laser-focused on the serialized nature of the story that the abrupt change of venue, tone, and conflict isn’t quite justified by the story itself. Especially given how much clumsy recapitulation Howard shoves into the first several pages – an attempt to give some continuity between the last issue and this arc and fitting Harley Quinn’s fourth-wall-breaking tendencies – but still feels awkwardly handled overall.

For this major guest appearance of Harley Quinn, Jeff Dekal paints a very light-hearted vertical composition, stacking Harley above Selina, both on roller skates, with a couple of sassy black cats purring around them as they sit splayed on the ground on the main cover of Catwoman #43. Jenny Frison’s variant depicts a very classy Selina in a purple dress (melting into the background) with understated ears and a very shaggy purple cat. For AAPI month, Rain Beredo has a classic romance style cover featuring a small full-length Catwoman against a huge torso-length Eiko carrying a dangerous dagger, featuring some of Eiko’s prominent tattoos as well as some semi-traditional looking flowered kimono.

An abrupt change of pace from the intense shadows and pain of the opening arc of Tini Howard’s run, this brief interlude with Harley Quinn gives some enjoyable thrills and continues some of the weaknesses of the run far.