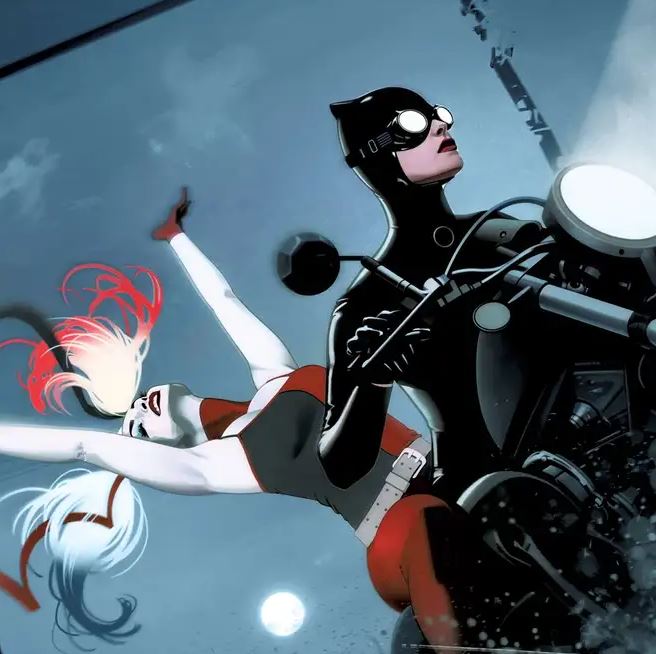 Synopsis (spoilers ahead): As Catwoman #44 begins, Don Tomasso wrangles Black Mask through his psychotic break in Gotham after Catwoman destroyed Roman’s mask. Meanwhile, Catwoman and Harley Quinn run into problems at the roller rink, as Red Claw attacks Catwoman in the locker room, delaying her from participating in Harley’s roller derby. Selina escapes onto the track and fails to explain the situation to her friend, forcing her to finish the derby to clear out the civilians for the battle. She fails at that, too, as Red Claw lights up the entire arena with a flamethrower. Harley and Selina steal Red Claw’s bike and hide out in a diner, where Harley lectures Selina about being honest about her plans, and Selina calls Valmont to flirt and check in on Black Mask. Selina lights a fire under Harley’s butt, and the two scram, but Red Claw catches up with her, having commandeered the car of the man who attacked Selina in the last issue.

After a chaotic chase, Selina manages to disable Claw’s car by crashing the bike into it, then convinces Red Claw to betray Black Mask by claiming he would pay a man more to do the same job. Claw gives the creepy man to Black Mask in a bag, furthering Roman’s psychotic rage, and Catwoman, Harley, and Claw drive back to Gotham together as Batman, the Batgirls, and Robins watch.

Analysis: Tini Howard and guest artist Bengal finish up their two-part road trip filler arc in Catwoman #44, which mostly seems to exist to introduce Red Claw from the DCAU into current comics continuity. While the first issue showed slight signs of improvement from the first arc of the series, this one plunges right back into the problems that plagued those chapters – roaring incoherence in plotting, ridiculous incompetence by Selina, and obnoxious preachiness that doesn’t match the rest of the book.  Harley’s roller derby makes zero sense – how would she regularly participate in these events so far from Gotham, especially given her Suicide Squad storylines?

The logic of Red Claw being able to light the whole arena on fire with one flamethrower is pretty tortured. And Catwoman continues to fail in everything she tries – beating Red Claw in the locker rooms, explaining to Harley what the problem is, being a good friend to Harley, period (when she’s not hitting on her or ogling her with metaphorical drool), evacuating civilians so they aren’t in danger, even finishing the roller derby. The chase scene makes very little sense in terms of how the timing of certain setup and payoff panels work, how the cars move in relationship to each other, and how a bike with less than twenty feet of runway flips a car on its side. The only two things she succeeds in doing this issue that she intended to do were crashing Red Claw’s bike into Red Claw’s car, and using the obnoxious “girl power solidarity” move on a murderous assassin who is now good because…she is also a girl like Selina. This isn’t to mention the completely gratuitous flirting phone call with Valmont – a pointless interaction unless you have invested in this relationship, and I really can’t see why we should, other than “two hot people.” Eiko Hasigawa in Genevieve Valentine’s run had more sense to why Catwoman cared about her romantically than Valmont (and let’s not touch how badly Eiko’s being handled in this run).

Bengal provides decent art to wrap up this filler arc – much better than his Flash variant covers hitting stands for the next few months, which are sadly low-effort – but the tone of the comic’s gritty, hypersexualized writing and the cheery, cute pencils from Bengal is still quite jarring.

Jeff Dekal paints our main cover, a moody Catwoman driving a madcap Harley on her bike, with some uninspired text balloons from Harley. Jenny Frison pens a slinky Selina in a deep V-cut gown in profile, gorgeous cat purring on her shoulders. Sozomaika paints a sexy Catwoman and Harley for the incentive variant, with the girls making silly jokes in text bubbles, somewhat ruining the quality of a variant. The use of text bubbles on two of the cover images likely owes to Harley’s appearance on these covers, though last issue had none of them despite Harley also featuring.

We're right back to this run’s former level of complete incompetence, preachiness, and inconsistent art, the end of this two part arc couldn’t come soon enough.