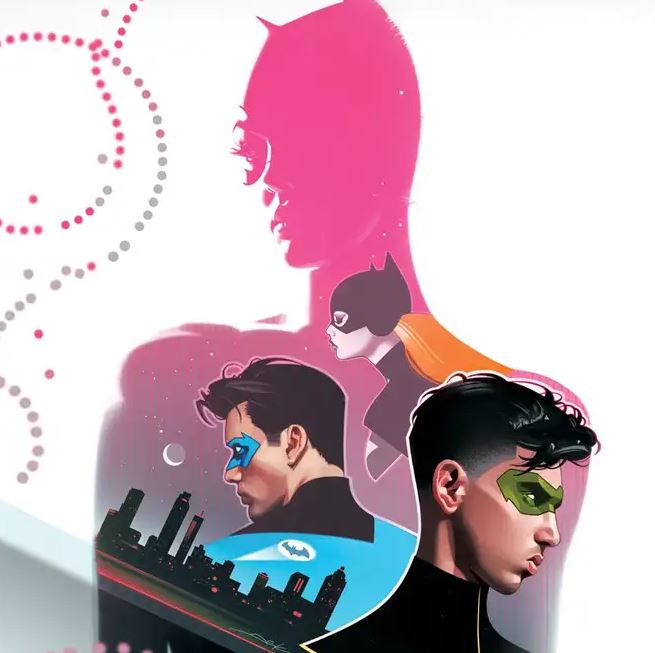 Overview: In Catwoman #45, Selina runs into the Bat-Family multiple times as she and Valmont plunge back into her war on the mob.

Synopsis (spoilers ahead): Catwoman #45 begins in Gotham, as Selina races her bike with Valmont riding a pillion, running over the status quo since Selina took a road trip. Valmont and Selina continue to flirt while Selina muses on her break from dating Batman, but they discover the Russian mob trafficking girls, something they thought had stopped due to the Russian mob boss’s new wife. Irate, Catwoman and Valmont rescue two girls, but the Russian gangsters light them up with machine guns. After Valmont throws a bomb to swing the battle in their favor, Robin (Tim Drake) appears, and they get into a shouting match since Robin kicked out the Yakuza who were keeping the Russians out. Trading sharp words, Robin also informs Selina she’s been shot in the leg, which she’d missed due to adrenaline.

In Selina’s apartment, Valmont stitches her up (this scene was also seen in Batman #125 from Batman’s perspective), and promises to stop killing for Catwoman’s sake, then Bruce calls, highlighting the romantic confusion in Selina’s life, leading her to jump out the window to escape.

She visits the Batgirls (Steph and Cass) at the Iceberg Lounge (crossing over with Batgirls #7-8), and the girls help her figure out the Russian mob’s system for selling girls by using the names of paintings. Selina infiltrates one of the mobster clubs (Milk, a classier one, apparently) and enlists Valmont to infiltrate as well. She runs into Nightwing (also crossing over from Batgirls).

Valmont surprises her by waiting to help instead of disrupting her plans like Robin did, leading to her growing closer to him. As she rides on Valmont’s bike, she listens to a heartfelt voicemail from Nightwing, who tells her he still wants to be her family and lets her know that the mob has captured Amygdala in their plans for more power.

Analysis: As Catwoman returns to Gotham after her Harley Quinn buddy road trip arc, Tini Howard CONTINUES to write Catwoman as incompetent, missing the ongoing girl trafficking by the Russian mob, and takes out her shame unjustly on Robin and the rest of the Bat-Family, increasing her unlikeability. Selina’s ridiculous hostility towards Tim and Dick and her amused tolerance for Steph, Cass, and Babs, in addition to the clunky, obnoxious final line about the “men of Gotham” (the mob), continues to underline how preachy, one-sided, and flat Howard’s performance is in exploring the Gotham underworld from a supposedly feminist perspective. Though it is perhaps annoying to continue comparing the two runs, Genevieve Valentine’s run on Catwoman explored almost exactly the same things that Howard is – the exploitation and dismissal of women by powerful criminal men and the way those women fight back – but instead of casting all of the men as one-not mustache twirling misogynists and all of the women as pure victims who just need to band together to burn down the patriarchy, Valentine showed women who make mistakes, have to learn from them, and sometimes even take bloody and unjustified vengeance.

On a more positive note, the coordination with Chip Zdarsky on Batman and Becky Cloonan and Michael Conrad on Batgirls is fairly impressive here in Catwoman #45. The way she writes Steph and Cass matches very well with what Cloonan and Conrad are doing, which is either a good or bad thing depending on your reaction to the Batgirls title. The little bit of detective work that Steph and Cass do is nicely plotted – it’s cool to see SOMEONE be competent in this book.

Nightwing’s speech about Selina’s relationship with Bruce is nicely done – particularly concerning that if they were together, Bruce would be too happy to focus on being Batman. Without disrespecting Tom King’s run (which too many other writers have done in the past three years, particularly Christos Gage in a dreadful short story), Howard actually manages to provide a door through the conflict that King created and potentially into a longer-term, closer romance between the Bat and the Cat again. In general, the internal monologue when Selina is talking to Bruce is very well done – her emotions seem genuine, unlike her shallow and obnoxious flirting with Valmont – rendered even more shallow and obnoxious because apparently, what Howard thinks a man is good for is passively waiting for a woman to make choices and plans. Instead of allowing everyone agency, she simply reverses the classic dynamic of passive woman, active man – lazy and unrealistic, not to mention unjust. Solicitations and covers show that Selina and Valmont will continue to get close in the next few issues, indicating that while the two may not have slept together in this issue, it’s not far off.

Sami Basri’s pencils are much more complex and assured than main series artist Nico Leon, perhaps partly because he’s backed up by Vicente Cifuentes on inks rather than shouldering linework duties alone as Leon does. Jordie Bellaire returns to colors, and Robbi Rodriguez provides three pages of art for when the book crosses over with the Batgirls arc, for which he also did art (Batgirls #7-8). A bit of a shame since it would have been really cool to see Sami Basri draw the Batgirls, though it’s clever of the editors to arrange for an art crossover as well as a character one.

Jeff Dekal provides a pretty, though an annoyingly limited portrayal of the Bat-Family within Selina’s pink outline on a white background for the main cover of Catwoman #45. Jenny Frison gives a torso-length portrait of Selina in her current outfit against a backdrop of neon “MEOW” signs for humorous effect on the cardstock variant. Sozomaika’s incentive variant shows a hostile-looking, glamorous Selina in an evening dress dangling a diamond necklace from clawed gloves, framed by a golden portrait.

Though the problems plaguing this run from the beginning of Howard’s writing continue in full force, a few strengths stand out to raise its rating a few notches, bolstered by excellent art from Sami Basri.