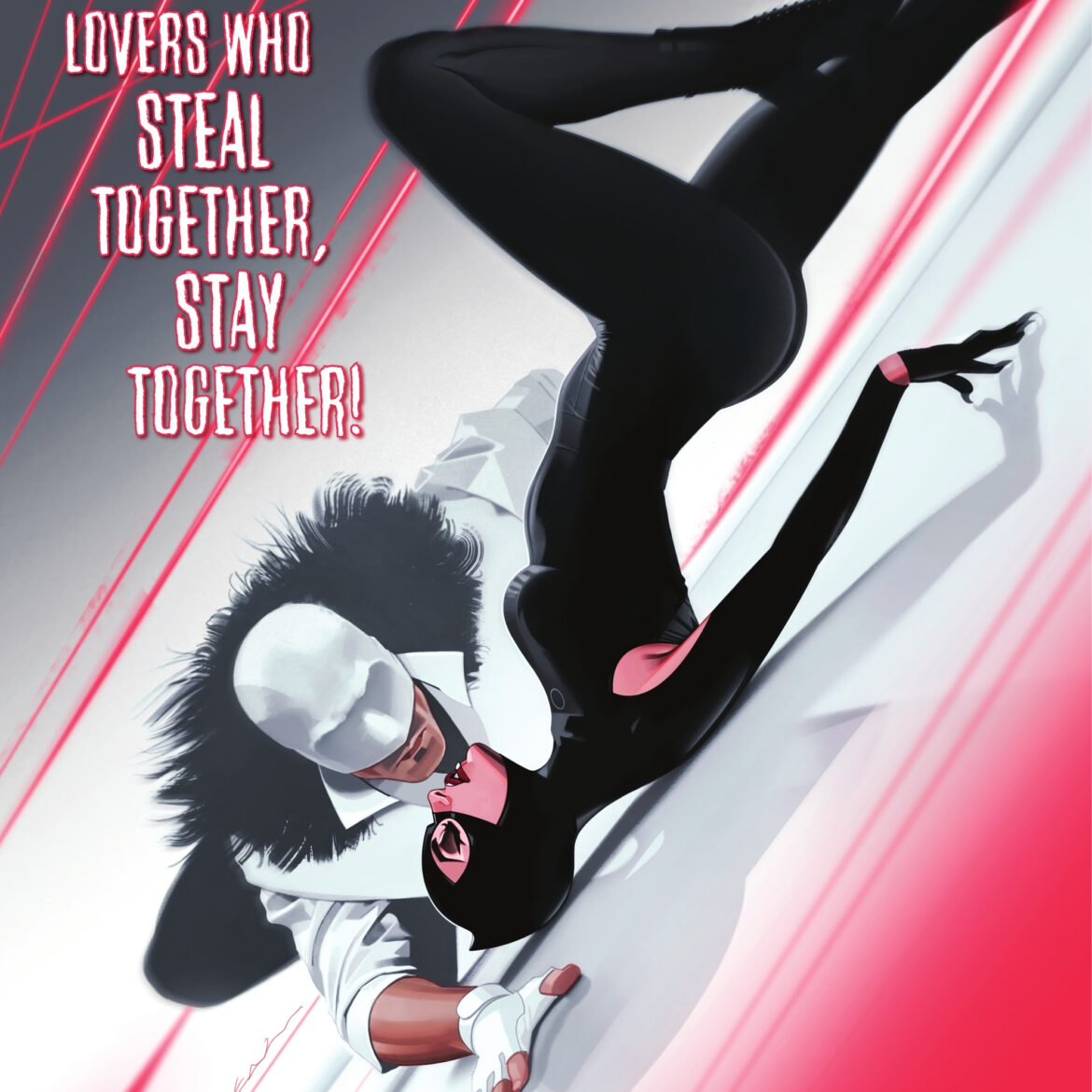 Overview: In Catwoman #47, Selina Kyle and Valmont start their whirlwind tour of Europe, fighting the families of the Gotham mob all the way.

Synopsis (spoilers ahead): As Catwoman #47 begins, Catwoman and Valmont torment/flirt with the stewards, stewardesses, and each other on their flight to Switzerland to deal with the Family Sullivan’s complications after Onyx and Selina dominated Finbar in Gotham. Amanda Sullivan, Finbar’s sister-in-law, tries to kill Finbar’s financial accomplice (who appreciates Catwoman’s influence on Finbar), and Catwoman saves him.

Meanwhile, in Gotham, Selina’s accomplice Dario Tomasso, after providing her with information on the Sullivans, is captured by his former lover Noah.

After Valmont and Selina fight off Amanda Sullivan’s goons on a wild snowmobile chase, they head to Vienna to track down the evidence on Ibanescu’s woman trafficking. Selina wastes time screaming at Valmont, and Ibanescu thugs burst in. Though they easily subdue the goons, Valmont has alerted his friends in Interpol who use the robbery as justification to seize the evidence against the Ibanescus.

On the rooftop, Selina gets Dario’s message from Noah’s car trunk, begging her to go to his aunt Mia in Tuscany to save him.

Analysis: Tini Howard, having decided that another road trip arc is necessary, despite the last one being completely unnecessary (though I’m sure Red Claw will turn out to be “vitally” important later but hardly deserving of a two-part Harley Quinn team-up which recently wrapped up in Catwoman #44), actually has some decent plotting. The problem is…it’s all Valmont’s plotting, and Selina just barges around and screams at Valmont despite her asking him to make the plans.

Dario and the Sullivan accountant both pay the price for her incompetence in Catwoman #47, and though of course, she will risk life and limb to save them, better planning on her part could have at least made it hard for her enemies to hurt her allies. Howard seems to want us to believe that Selina is both a passionate crusader for good (her obnoxious quote in this issue, “I’m good to all women” sums up Howard’s idea of the limits of Selina’s virtues) and also a super awesome and competent heroine…except that she keeps writing Selina as one of the most incompetent heroes since Kenneth Branagh’s Poirot – constantly getting those they care about killed or endangered for no good reason. Valmont, on the other hand, clearly is competent (except for his bizarre infatuation with Selina), so of course, Selina spends the whole issue berating or yelling at him. It’s not a good foundation for the romance that the solicitations and covers keep trying to sell us on.

The whole package is not helped by Caitlin Yarksy’s art. Filling in for regular series artist Nico Leon, Yarsky’s posing and faces are awkward and clumsy. Though Leon also often has weak poses and faces, Yarsky’s posing feels much less confident and effective. Colorist Jordie Bellaire continues to sell the art much more than the linework deserves, but still, this issue feels like a fill-in on the art level.

Tini Howard continues to write Selina driven by emotion over any thought, leaving others to be both more competent and suffer the consequences. Despite this emotion driving, the “romance” between Valmont and Selina is beyond unconvincing (sold much more by the cover than anything inside the book), and the fill-in art is very unsatisfying.