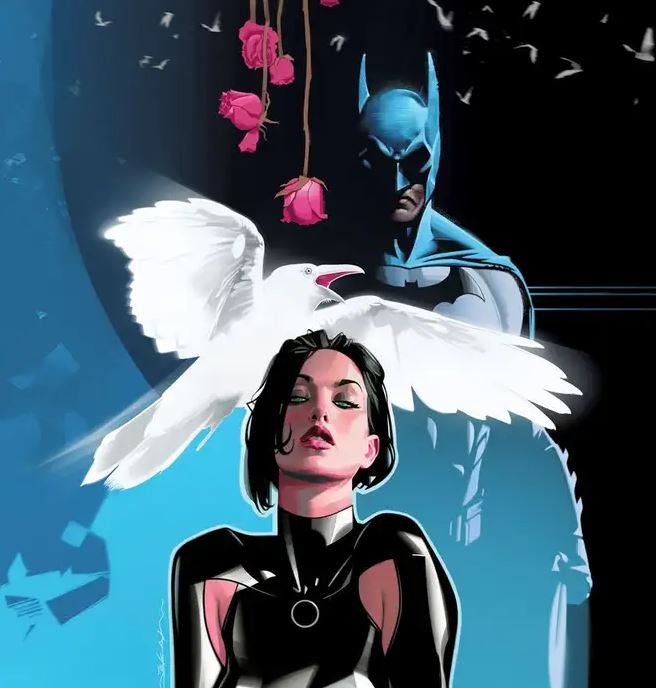 Overview: In Catwoman #48, Selina and Valmont end their Italian visit with a bang as they head back to Gotham.

Synopsis (spoilers ahead): Catwoman #48 begins in Tuscany, as Selina (using the name Calabrese from the Valentine run) and Valmont approach the Italian Tomasso leaders to save Dario’s life. They appeal to Dario’s mother’s friend/former lover Mia, and the Don Lorenzo, ruled by his wife Vittoria. Vittoria rejects Dario for his homosexuality, and Selina rages at her contempt. Mia counsels patience despite the desperate situation.

In Gotham, Dario’s former lover Noah turns Dario over to Black Mask, though he seems to have lingering feelings for the man he betrayed, leading to Black Mask making more disgusting statements, shooting the Tomasso men, and knocking Noah out before driving off with Dario as bait for Catwoman.

Catwoman orders Valmont to join her on a mission to the Tomasso villa. She threatens Mia’s small dog, then uses her stolen black glove as an incentive for Vittoria to openly take control of the Tomasso family and order a rescue of Dario in Gotham.

Valmont drives the pair onto a flying plane controlled by his friends headed to Gotham, and Selina confronts him about those friends – members of the League of Assassins. Valmont claims they are former members, but Selina finds one of them is Flamingo, and the whole plane erupts in brawling. They defeat the assassins, and Valmont confesses his love for Selina just before they jump out with a single parachute for them both. They land and begin kissing passionately.

Analysis: Tini Howard continues her run with Catwoman #48 with the end of her second road trip arc that lasts for two issues, just two issues after the last road trip. That period is significant because neither road trip was well motivated – nothing was accomplished in those trips that couldn’t have been done in Gotham itself, or at least the outskirts of Gotham, continuing the trend of Howard’s plots following unmotivated rabbit trails for no apparent reason. Now, one can sort of see that Howard is attempting to build a “girl squad” for Selina – Red Claw in the first arc, Vittoria Tomasso in the second – but both are morally despicable, leading one to question why such a squad is desirable other than the constant pounding of Howard’s theme that all women are victims and deserve to be in power, and all men are morally inferior and need to be mastered, beaten, killed, or ordered around.

When added to this strident messaging are clumsy notations like “Gotham City. Now.” after no indication of a time jump. And a significant spelling error of “so” instead of “son” – for some reason, Catwoman tends to have some of the most egregious spelling errors of the books I’ve reviewed – I’ve noticed them for seven years now (though I will say that the current Batgirls issue also had a frustratingly bad spelling error). But there’s a sense, given the frequent artist changes, the use of an unknown artist as the central art for the book, and the slapdash copy editing, that a bit more care would really make this book a more enjoyable package.

A topic of much anxiety and conversation on Twitter because of the solicitations and general plot direction of this book is the final scene of Valmont and Selina kissing passionately on the beach after his declaration of love and Selina’s monologue of not landing on her feet – implying Valmont has swept her off of them (though contradictorily, Valmont’s passivity and willingness to be dominated by Selina is supposed to be his main attraction and moral superiority over every other man in the book so far). Solicitations call Valmont one of Selina’s “lovers,” indicating to me that they have crossed the line at the end of this issue, leading to a confrontation between Valmont and Batman in the next issue. Those who favor the Bat/Cat ship are pretty agitated about it. However, I urge those shippers (and I share your passion for Bruce and Selina’s love for each other!) to remember that Bruce and Selina have had many other lovers in their eighty years – I have no doubt that they will find their way back to each other in the long run again, as they should.

Nico Leon returns as the main artist, with Veronica Gandini on colors, and they paint a lush portrait of Tuscany. After the somewhat frustratingly awkward art in the last issue, it’s nice to have the main artist back, though the final scenes are often still awkwardly posed, with Valmont looking pretty static and clunky just before he leaps out of the plane. However, it does feel that Leon has really improved his detail work, consistency, and character appeal in his time on the book.

Jeff Dekal’s main cover for Catwoman #48 shows Selina lounging seductively beneath a shadowy and disapproving Batman, while the cover text promises a new toxic relationship for her. Sozomaika’s cardstock variant has an angry and spiky Catwoman head staring out at us dramatically. Tula Lotay’s incentive variant features a midbody shot of Selina, mask off, caught in a spotlight against a somewhat muted orange backdrop.

Howard’s frustrating plotting and cement-block clunky characterization continues to drag this series out excruciatingly, while Nico Leon’s art has improved, though doesn’t make up for the writing.