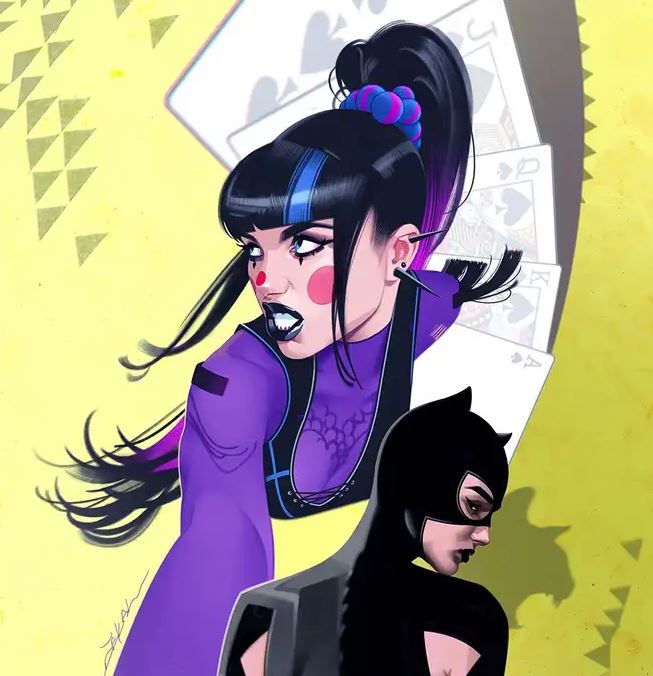 Overview: Catwoman, Valmont, Eiko Hasigawa, and Batman smash into each other as Selina’s plan to take out Black Mask takes shape in Catwoman #49.

Synopsis (spoilers ahead): Dario kicks himself free of the car trunk into the backseat of the car and finds Catwoman taking out his captors in a guns-blazing chase. Catwoman jumps into the pursuing jeep with Dario’s ex-lover Noah and his goons, beats them up, and crashes the vehicle, leaping back onto the car Dario’s driving as they wind up in Alleytown, where Punchline and the Royal Flush gang are making a mess. She takes on the gang, but finds Billy, one of her Strays, joined up with them accidentally, and gets him out.

Back in her bolt hole at the Trixie Hotel, Selina tends to Dario’s wounds, and they talk about her love life with Valmont and Batman being complicated; Selina hopes that Batman is her future, even though they’re on a break and she’s with Valmont.

Selina meets up with Eiko, both patrolling as Catwomen, and Eiko warns Selina she’s going to lead the Hasigawa Yakuza clan against Punchline in Alleytown when they’re interrupted by Valmont. Eiko leaves, and Valmont persuades Selina to take horizontal refreshments on the rooftop, despite her lack of sleep. She then leaps off to her next appointment, meeting with Batman to let him know her plan to fight the mob. Batman promises to clear Punchline out of Alleytown, and Selina and her allies will take down Black Mask and the Five Families.

Analysis: Tini Howard sets up the finale of her three-part arc, “Furious Hearts,” in Catwoman #49, linking Selina’s European adventures and an expected major conflict with Black Mask. The cover of this issue promises an appearance of Punchline, as does the solicitation, but like many, many solicitations recently (particularly the other book I’m reviewing, Batgirls), it appears that major editorial changes have shifted many things around. That leads to things like Selina and Valmont’s first sexual encounter feeling extremely weird since both just before and after she sleeps with her new paramour, Selina fantasizes about her future with Batman. It’s unclear whether this is supposed to feel odd or if it’s the compression of a plotline that Howard intended to space out more organically. The dynamic between Selina, Valmont, and Batman continues Howard’s pattern of Selina being attracted to men who do everything she says without questioning or challenging. Odd considering that Howard’s last portrayal of Batman was a sharp fight between the two of them.

Batman’s complete trust in Selina’s planning is all the more bizarre because of the fact that last issue, it seemed that she strongarmed the European Tomasso family into rescuing Dario, but instead, she does it herself, leaving Dario to languish in cars while she flew around Europe, back to Gotham, and then some alone time with Valmont, before finally rescuing him. The fact that she does accomplish it strains credulity.

Nico Leon’s art with Veronica Gandini’s colors in Catwoman #49 continues to be very atmospheric, though too often, pages like the second to last, showing all of Catwoman’s allies, show either extreme rush in the overly simplified faces in close-up, or Leon’s continued apprenticeship as a Big Two artist. A positive note – Eiko in Catwoman costume looks very much like a nod to David Messina’s rendition of her in Valentine’s second arc. The coloring, particularly scenes like the last page, where the neon Hasigawa motorcycles race beneath Batman and Catwoman at night, does extra work in layering the book in a neo-noir mood and adding a lot of polish not necessarily present in the naked linework.

Jeff Dekal paints a very appealing Catwoman vs. Punchline main cover with an interesting pale yellow background, though the criminal clown doesn’t really show up in this issue (perhaps due to the aforementioned editorial changes to storylines). Sozomaika’s main cardstock variant once again shows an (absent from interiors) Punchline vs. Selina showdown, this time against a bright red background. Tula Lotay’s incentive variant shows a somewhat awkwardly posed Catwoman on her hands and knees licking her claws, with bright pink neon lights behind her. Lastly, Jim Balent’s 90s Rewind variant brings back the classic purple bodystocking, shining claws, and luscious black hair flying free as Selina faces the audience boldly on top of a glowing green skylight.