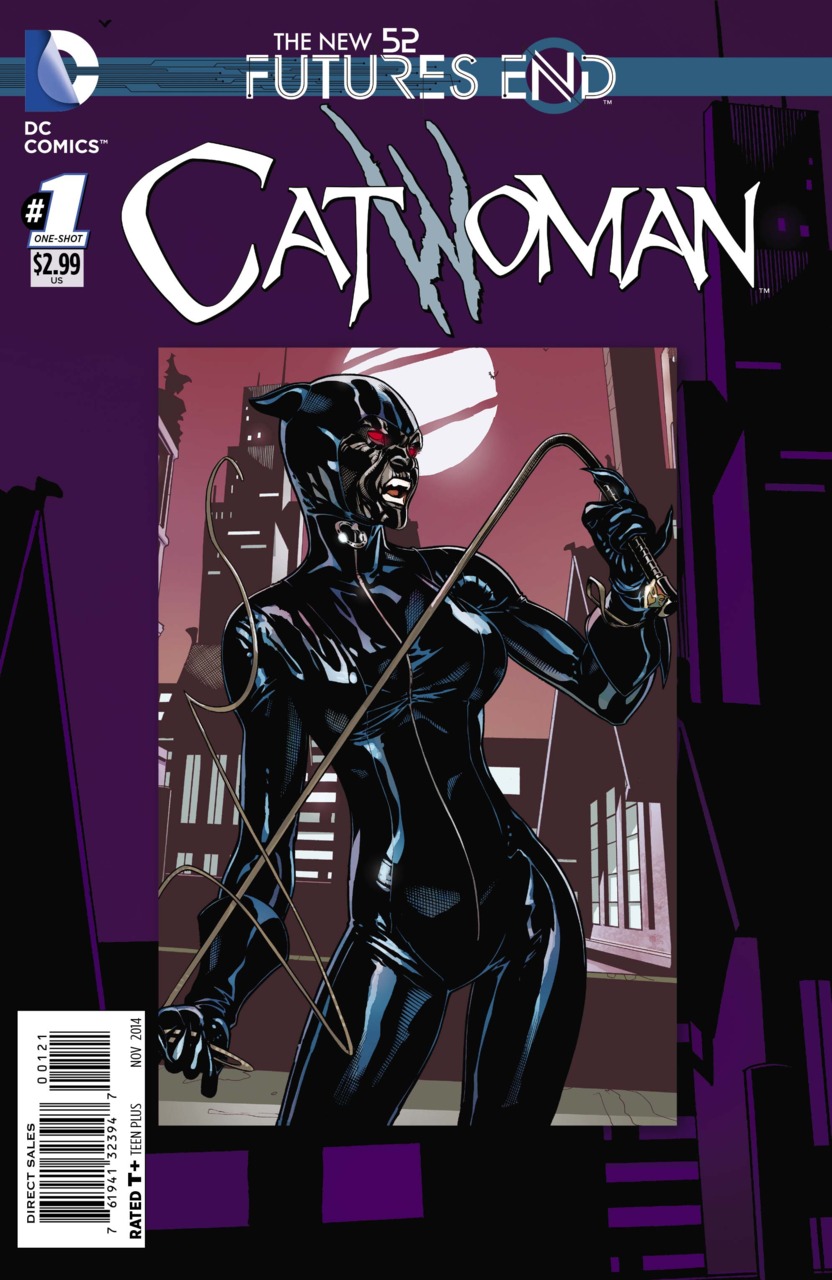 Let me get this straight before I get started… I love the character of Catwoman. I think she’s awesome. I love how strong she is, how manipulative she can be, how she is strong headed, and takes what she wants. She can sometimes come across as a cold hearted person, but once you get to know her past, you understand why she acts the way she does.

Sholly Fisch writes a story here that does all that for you. It gives you a sense of who she is. Fisch impressed me with this single issue. In just 22 pages, he tells a better story than we’ve gotten from Catwoman in a long time. Interestingly, he ties in the future of Futures End along with what’s happening in Batman Eternal to give us a Kingpin Selina Kyle.

Pat Olliffe does one last issue, and I feel that his art gives the zany sense that Nocetti’s run brought, just from his storytelling alone. But it was just enough to make some scenes fun and lighthearted.

Selina is conducting a crimelord meeting, but some of the others aren’t getting along. Georgie Maroni, who has transplanted his mind into a cybernetic gorilla (hilarious) is getting a little heated with a man named Tusk (who has lopped off tusks on the sides of his face). When Tusk calls Maroni Georgie Bananas, that’s just taking it too far, and we have a gun standoff amongst EVERYONE. Selina is trying to make an agreement between everyone to prevent a gang war, and if they are quiet, Batman stays off their backs. However, Tusk doesn’t like sharing, and tries to attack Selina. But, he’s shot in the face by Erin McKillen, the redhead from the Batman and Robin – Two-Face story, who is the leader of the Irish mob. Selina excuses everyone, as she talks with her second-in-command, Matt Falcone.

She and Matt seem to be in a romantic relationship, as well as a business partnership. They share the key to access the entire gang’s off-shore accounts, and they head to Tusk’s gang to remind them of who is in charge. Falcone has Selina wait for the car to start, making sure she’ll be okay.

Once Selina is in the car, Falcone leaves and detonates that car, seemingly killing Selina. He declares to the rest of the crime-lords that he is now in charge, because he is the only one with access to their accounts. As he pulls it up on his phone, the balance shows $0.00. They all know that Selina took the money, but since Falcone killed her, there’s no sense in sparing him, thus starting the gang war for Batman to take down.

Six months later, Selina is in France, tanning on the beach, when Nygma shows up, trying to blackmail her for some of the money she stole. However, she knows that he can’t give away the answer to a riddle, so he gets nothing.