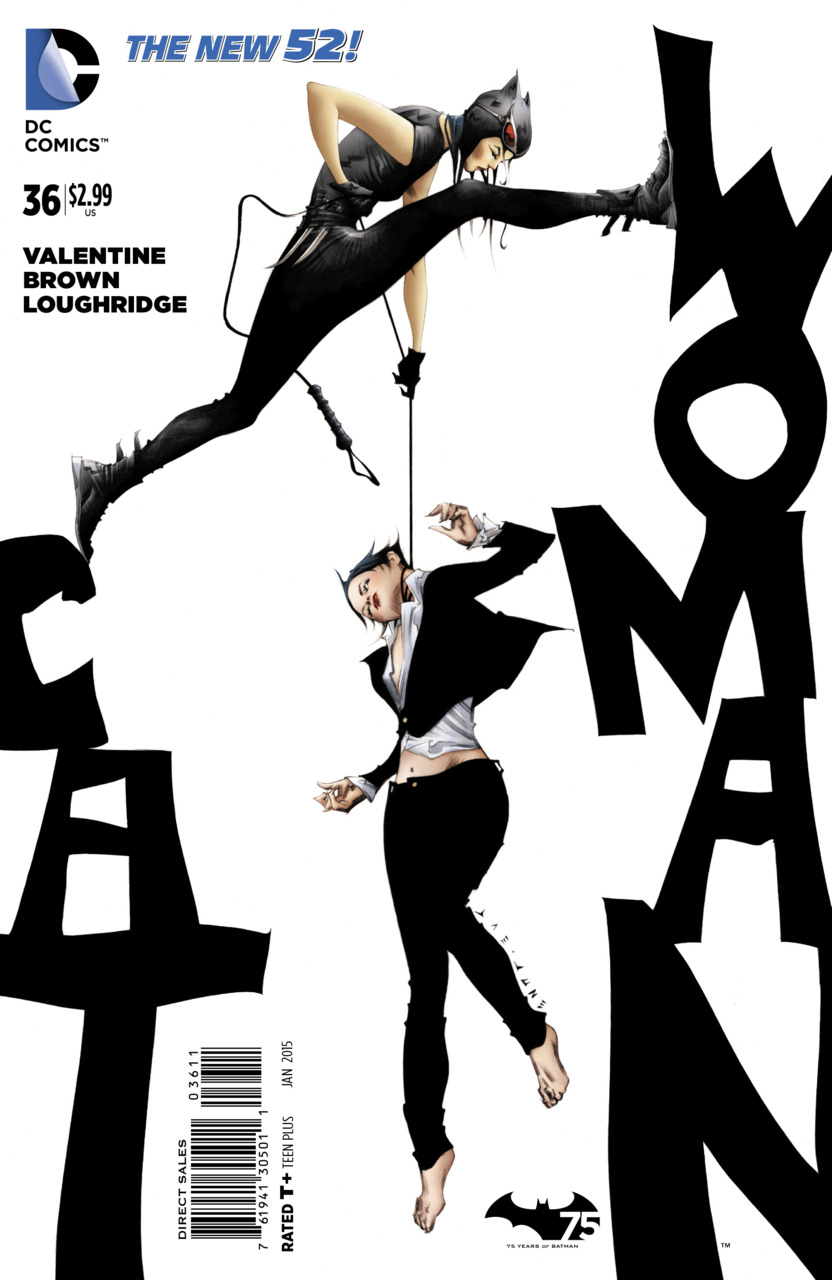 First off, if you haven’t picked up an issue of the new run on Catwoman with the new creative team…do it now. Close the laptop, turn off your computer and do it…cuz you’re missing out. I’ll admit I was one of those people who quickly dropped out of Catwoman early on in the New 52, especially when Ann Nocenti took over…but now it’s done a complete one-eighty and taken off in a new and exciting direction.

This issue opens with Black Mask and his gang cornering another member of one of the Gotham crime families in an alley. When they are preparing to kill him, Catwoman drops down out of nowhere and causes a distraction until the GCPD arrive on the scene. Everyone quickly disappears while we see a montage of Selina Kyle making her rounds at diplomacy and meeting with the other families.

Back at GCPD, Detective Alvarez is still searching for Selina against orders and has been secretly following her while making up excuses to his partner.

Selina eventually meets up with the rest of her “family” and discuss how they have taken over the weapons trade from the Falcone family, with a stipulation that they can use Gotham docks (normally run by the Hasigawa family) if they continue their drug distribution. They seem to come to the conclusion on getting a hold of the drugs but not flooding them into the streets and deal with the repercussions later.

Some time later, a man named Aiden Mason appears on the scene and begins touting himself as a man to bring about Gotham’s restoration. Mason is the CEO of Asolat Incorporated and he gives a speech about saving Gotham…however the images of bribery, murder and extortion are sown throughout his words, ending with an image of Black Mask. Selina and the Calabrese family don’t like what Asolat Inc is doing, as it spoils all of their plans to cement control over the city. Eventually Selina calls together the heads of the families for a meeting and attempts to find the one responsible for helping out Aiden Mason as he is now in charge of Gotham’s reconstruction. The families decide to move forward with their drug operation, and after the meeting Selina and Ward discuss that the muscle assisting Mason is unknown as well as letting her know that he is keeping an eye on Alvarez. Elsewhere Nick and Antonia Calabrese argue about the deal going down at the docks involving the drugs; monitoring them from another location, Selina allows Nick to leave and notify the GCPD as there would be no way for herself to setup a sting operation.

Later at the docks, Nick meets up with Alvarez to pass on his information, but as Nick is leaving we see him get grabbed by an unknown person.

We then switch to Selina standing on the balcony of her penthouse when Catwoman shows up! The two engage in a brief struggle with Selina coming up the victor. Catwoman’s costume ends up ripping along her shoulder which allows Selina to identify the new femme fatale via her tattoo. Selina rips off the mask and reveals Eiko Hasigawa and demands the reason behind Eiko donning the Catwoman identity. The two argue briefly on the “purpose” of Catwoman. Eiko persists that Catwoman would stopping the actions that Selina is making, while Selina counters that Catwoman is simply a thief and if she had wanted to do her civic duty “sign up for the Robin waiting list. I’m better for Gotham where I am.” Eiko jumps off into the night as Selina contemplates if this is truly the right place for her to be.

The issue ends with a scene of Nick being restrained, and Black Mask stepping out the shadows to talk to him.

This is definitely a much better direction for Catwoman than what was going on before. And these issues feel more like “Catwoman” even though Selina is no longer in the costume.

I am greatly enjoying how the story is playing out, involving the different crime families in Gotham with Selina as the kingpin. This is definitely heading in an upwards direction and keeps the reader interested by giving glimpses that Selina is tenuously keeping a grip on her position…she’s allowing certain actions to go unquestioned while she manipulates events to cause others to go under. This new Selina seems a bit more level headed and cunning, willing to do what she needs but not compromise her own moral code. Perfect example is seemingly going along with the drug operation, but allowing Nick to inform the GCPD so the operation gets uncovered.

The art is also pretty interesting, it’s not very vibrant, sharp or colorful…but I feel that it works with the story being told as it grounds the artwork and thus our perception in reality.

The only downside is that it is sometimes confusing about who all of these new characters, as much as it’s a refreshing take to see some stories that are a little more grounded…it’s tough to decipher who everyone is when they wear suits instead of weird, gimmicky costumes.

Overall I am really enjoying this new Catwoman direction and am looking forward to the stories that revolve around the families. Pick this up if you haven’t, as you will not be disappointed.