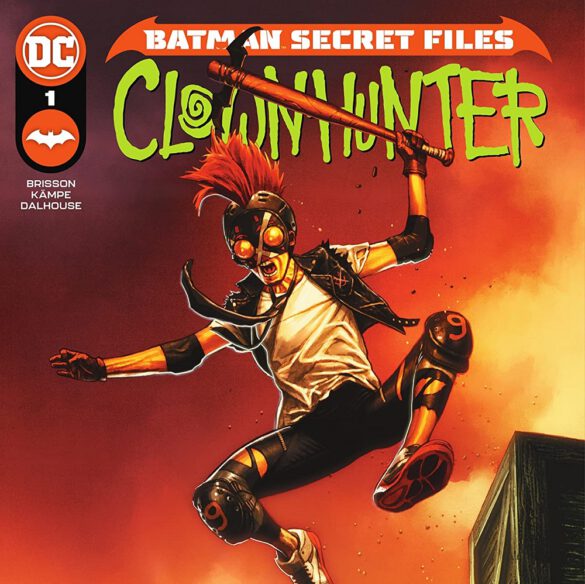 Synopsis (spoilers ahead): Two years ago, in Gotham Academy, Bao (the boy who would become Clownhunter) falls afoul of a group of bullies, who beat and kick him mercilessly. In the Narrows, present-day, Clownhunter stalks a clown named “Sol”, who’s been boasting about recruiting for the Joker. He starts beating him with his Bat-Bat, but Sol reveals that Punchline has set a trap for him from Blackgate prison, ordering Sol to blow Clownhunter up and then kill him.

Flashing back to Gotham Academy, Bao stands up from his brutal beating and fights back utterly brutally.

In the present, Punchline tries to convince Clownhunter to kill Sol, but when he hesitates, she orders a whole gang of her clowns to kill him.

The past and present both show Bao/Clownhunter overwhelmed with numbers, as the bullies continue to beat him to a pulp, and the clowns hang him by the wrists from a lamppost. The clowns begin to move in for the kill, but Red Hood beats them all with a crowbar, and releases Clownhunter, offering to train him, even to work together and kill the Joker, but Clownhunter runs away.

Analysis: When last we saw Clownhunter in the Batman Annual #5, James Tynion and James Stokoe gave us a powerful, uncomfortable story of a boy who lost his parents in a very deliberate parallel with Batman, and connected to Leslie Tompkins, who also helped Batman in the same circumstance. Now, eight months later, we pick up his story in Batman Secret Files: Clownhunter #1, and sadly, this installment of his narrative is greatly inferior in impact, worldbuilding, and general craft.

Though a few ideas, like Punchline organizing Joker’s minions from prison, offer a fun look at the aftermath of the Joker War and the way Gotham criminals function in “smaller” stories, the rest of the story is drawn out and does not pay off well at all. The entire Gotham Academy flashback sequence not only unkindly trashes the “love letter” that Becky Cloonan, Karl Kerschel, and Brendan Fletcher wrote to Batman and Gotham (similar to how Batman Secret Files: The Signal trashed the We Are Robin characters – it almost feels like a concerted attack on the DCYou era), it wastes time by offering no characters, no development, and no conclusion to that part of Bao’s life, just trailing off in a string of repetitive, ugly panels. The whole story feels like it should have been an eight or ten-page story in the Urban Legends anthology series, rather than an oversized, high-priced, prestige title.

Additionally, like all of the Secret Files so far, there’s no real attempt at an origin or profile of Bao, just a decompressed story rehashing everything we’ve seen before about Bao. This story doesn’t give Bao meaningful relationships – Jason has potential, as does Punchline, but he rejects both of them without forming the emotional connection he formed with Batman or Leslie Tompkins. It ends with Clownhunter making the exact same decisions he made during Joker War, and rejecting the opportunity Batman and Leslie offered him. All in all, a grimy, small-minded, and pointless tale, wasting a lot of the potential of Clownhunter created in the Annual.

Mico Suayan gives us a cover for Batman Secret Files: Clownhunter #1 in a somewhat similar style to Derek Chew’s digital painting style as found in the covers to Batman Annual #5 or The Joker War Zone variant. Kofi Ofosu provides a much more cartoony variant, while a black and white incentive (usually higher priced) edition of Suayan’s main cover is also available.

After eight months, Clownhunter returns in his own Secret Files tale - but sadly, his character regresses back into the edgy cliches of Joker War instead of the beautiful parallelism of Batman Annual #5, and taints some of the best Batman comics of the last ten years in the process.