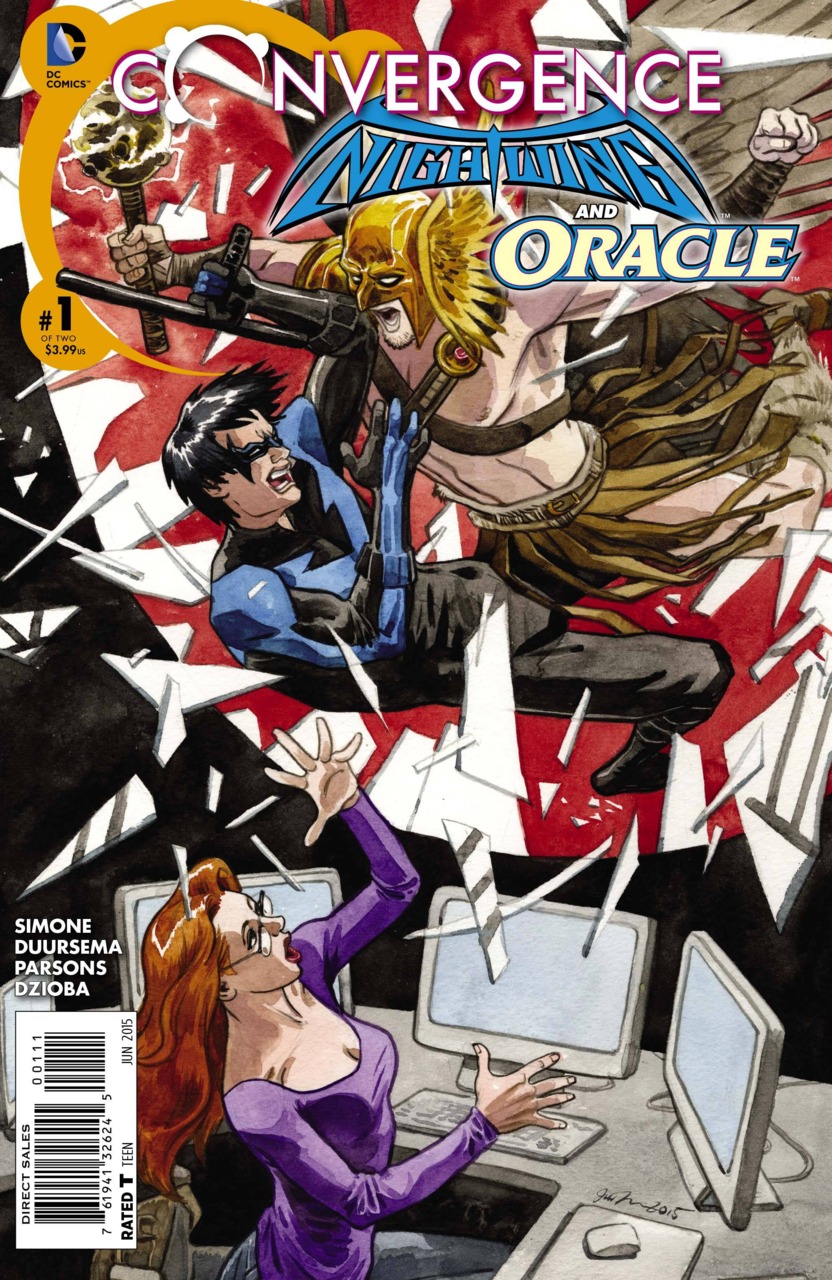 The Story: On El Inferno, Hawkman and Hawkwoman are wiping out heroes from this world, including versions of the Martian Manhunter, Blue Beetle, Flash, and Green Lantern. They are following the orders of a drone under the command of Brainiac. The Thanagarians receive no further orders and await more champions to fight.

In Gotham City, Oracle provides tech and surveillance support to Nightwing as he goes to a museum in order to take down Mr. Freeze who ends up surrendering, saying that the whole thing does not matter anymore. After this disheartening encounter, Nightwing asks Oracle for some time alone and meets up with Starfire who tells him he needs to prove that something still matters.

In the Clocktower, Dick and Babs discuss Mr. Freeze before heading out to dinner where Dick proposes…and Babs says ‘no.’ Dick doesn’t have much time to contemplate this answer before the Dome unexpectedly dissolves and the Thanagarians arrive to fight this city’s champions. Hawkwoman explains that they will forfeit the match in exchange for complete control over this world. The other option is to fight and die. Dick reappears as Nightwing but is outmatched against Hawkman as Babs watches helplessly. Hawkwoman, clearly the one in charge, tells Hawkman to stop, further explains her plan, and gives Nightwing and Oracle one hour to decide.

After the Thanagarians leave, Babs tells Dick that she cannot physically help him and it’s up to him. Disappointed, he leaves to get supplies in the cave before the fight in the rocks to the north, while Oracle uses another method to fight.

Next: War of the Wing

Thoughts: As I am a confessed Dick/Babs shipper, there was probably no other book in the line of Convergence tie-ins that had me more excited and more nervous than this! Excited because this relationship is practically non-existent in the New 52, but nervous because there is a lot of pressure on the writer here, and that writer is Gail Simone. I am happy to say I was not disappointed.

But let me back up for a moment. The beginning is slightly jarring, if only because you are entering the action in medias res, with heroes that are slightly familiar, but distinct enough that you understand you are somewhere else. Besides the general idea to kill for killing’s sake, it is unclear why the Thanagarians are destroying the heroes of El Inferno and following the orders of a drone, when we all know Thanagarians like to follow their own orders. This set-up, while slightly intriguing, could almost be omitted. The majority of all of this exposition is given again in the form of Hawkwoman’s speech to Nightwing and Oracle. If the purpose was to show what is at stake and how ruthless the Hawkpeople are, then mission accomplished, but I imagine there is a better way to start the issue and utilize the page-count on the two characters that really matter (Dick and Babs).

Everything picks up once we reach Gotham City in the other Dome. I felt right at home as if I never left this particular universe. It was wonderful to see Nightwing and Oracle working together again as if nothing had changed, and Simone seems comfortable writing them. Both voices of the characters are exactly inline with how they have been and should be. I enjoyed the inclusion of two mainstay Bat-villains, Mr. Freeze and Ivy. It was a great and fun way to show that Gotham City still has the same problems, but times have changed and so have the people inside. While Mr. Freeze going after diamonds and attacking Nightwing certainly makes sense, I do wonder why he would all of a sudden give up once the fight has begun. Shouldn’t he have realized it was all pointless before entering the museum (for the third time)? On the other hand, Ivy, who is a personal favorite of mine since the New 52 began (a positive outcome), has decide to help the people under the Dome. I think this is always something that the character has had the potential of, and I also liked that Babs is somewhat remorseful at how she treated Pamela in the years prior.

And what about Dick and Babs? I was not disappointed, and in fact, I was rather pleased with the portrayal of their relationship here. It was certainly an amalgamation of all the greatest hits from Birds of Prey and Nightwing pre-New 52. They work well together, and their romantic life is sentimental and organic, not forced. My one issue here, contained mostly in the act of the proposal and the rejection, is the fact that this could be the Babs from the late 90s rather than the early 2000s. Here we see the Oracle that is a little more self-conscious and uneasy, rather than the one that is confident and strong in all aspects of her life.

It was interesting that Oracle as well as Hawkwoman are certainly taking the lead here and are seen as the people in charge. It was difficult to see Nightwing beaten so quickly and easily and Babs just sit there without trying anything. She is not the rash type, but one would think that she would be able to get the upperhand on Hawkwoman. And yet, she does not. Her reticence and inactivity is in direct contrast with Nightwing, and puts them at odds with each other at some level. The fact that Babs is willing to fight as Oracle and not tell Nightwing her plan nor help him directly, continues this disconnection between the two, and I do think that this is troublesome and not necessarily inline with what the characters would do.

The Thanagarian plan does not make much sense to me either, mainly because they have already proven that they can easily destroy any hero, so why not kill everyone and remake their Thanagar without any opposition? After all, there is practically an army of them in Gotham! In any case, we know that Dick and Babs are not going to sit idly by while this happens, and it seems the Thanagarians will be facing one heck of a fight from different angles in the next issue.

Overall, I enjoyed this issue and I think that it turned out well. It was fun and heartfelt, and the writing flowed well. The art, while I have not commented on it, is also well-done. It totally fits the story and writing, and reminds me of Birds of Prey and Nightwing issues of the past. Personal Grievances: Two main problems that I, Stella, have with the story, as a fan, less a reviewer, are 1) why is Starfire in this issue? and 2) would Babs really be the one scratching to get out of the cage?

1) I dislike Starfire. I dislike Starfire and Dick’s relationship. Why is Starfire, who is a big moment in Dick’s life, and also has created some trouble previously in the Dick/Babs relationship, in this issue? Why would that seem like a good idea? To make matters worse, Dick is meeting with Starfire without Babs knowing and their talk, as well and their physical touching is suggestive. Why is Starfire even in Gotham City under the Dome? Shouldn’t she be somewhere else? Am I being trolled here?  Was her only purpose to create tension?

2) As I stated earlier, this Babs does at times read like a late 90s version. Even if we read her like that, one feeling that troubles me throughout the issue is that Babs is the one that is most unsettled being stuck under the Dome. No matter the version of Babs, I don’t think she would be the one that is not content with her current life. She is still in Gotham City, still in the Clocktower, and SHE is usually the one who tries to focus on the present. Dick has been seen by Babs in the past as a bird that cannot be caged. Think about Dick leaving Bruce to become Nightwing, leading the Teen Titans, and even going off-world. I believe that Dick would be the one who would be most troubled with the current situation, and because of that, I think that Babs should have said ‘yes’ to Dick. After all, she said ‘yes’ to him during the insanity of Infinite Crisis! How is now any different?