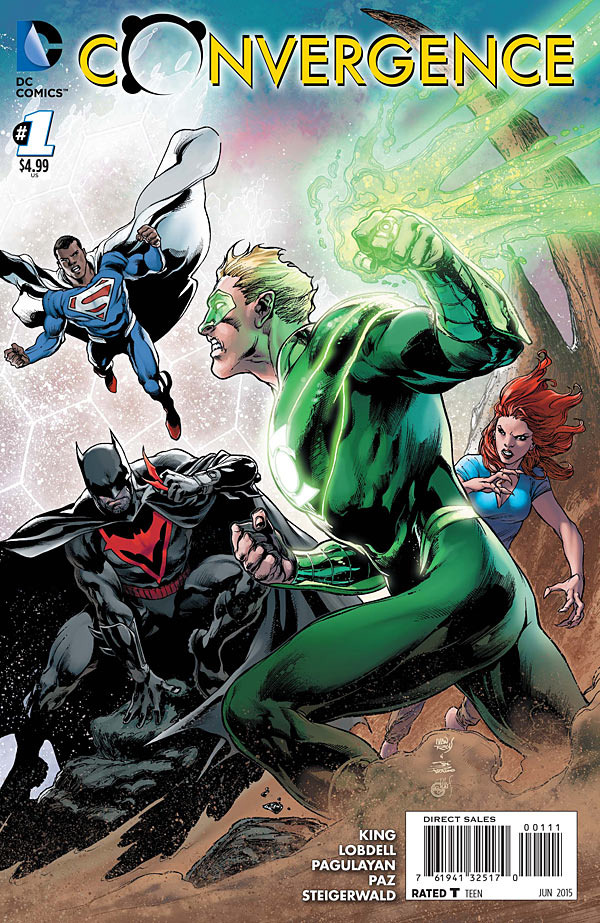 Convergence begins in “earnest” this week as issue one hits the shelves. We open up on the “Injustice: Gods Among Us” Metropolis where Superman has broken out of his prison and we come to find that Braniac has apparently deposited the city onto an active volcano. Oops? Telos deems them unworthy and destroys the city and decides he must begin again in order to find the one earth that will return to the universe.

Out of nowhere and without warning the gang from Earth 2 show up on the Blood Moon. They quickly find out that they are clearly not on Earth any longer. After bickering with each other about Earth 2 dying Telos then shows up and demands to know why they don’t have a city packed with them. He then realizes he waited too long to take Earth 2 out of time and space and only got it’s inhabitants. Telos explains the idea of the storyline yet again to the Earth 2 gang which for some reason is missing Huntress and Powergirl. As the Earth 2 heroes go through the same “Let them go!” mantra as New 52 Superman did in issue #0 the big speech we have seen in all of the other two shot storylines is spoken by Telos and he drops the barriers to the 40 worlds on the Blood Moon. As the issue ends we see the various versions of Superman all take flight to get to the bottom of what has brought them to this strange place.

This reviewer really only has one word to describe the experience of reading this issue: Frustration. First of all being the reviewer of Earth 2: World’s End I was more than a little let down with how that book ended especially after knowing that the heroes in that book were going to play a key part in Convergence at some point. You can’t convincingly tell me that it was a good decision to put the actual ending to that book outside of it’s own storyline. And then to do so off panel is even more of a kick in the junk to a fan that loves seeing the everything line up.

Although the idea of Brainiac taking the heroes of Earth 2 wouldn’t exactly have been much of a twist to that story it would have been nice to see in the midst of battle between the heroes and Darkseid, as the wildcard that is Brainiac, swoop in and not only baffle Darkseid and put him on the ropes but also show his might by explaining what he was doing there. Instead we have gotten something that especially after reading Future’s End is nothing short of convoluted. If you think about it hard enough you can come up with a timeline that works for you but we as readers shouldn’t have to do that. It’s nothing short of laziness on the part of DC creative. If the final panel of Earth 2 was instead of Darkseid holding the holographic earth was the heroes on the Blood Moon wondering what just happened and where they were that would have been so satisfying. And really not all that hard to do. I’m looking at you DC.

I like a lot of DC fans were shouting from the rooftops fighting over the naysayers of DC’s current direction since the reboot that this event was going to fix everything that was wrong with the state of the DCU today. And as of reading the #0 issue and this issue not only have we not moved the story forward but this was nothing more than exactly what the #0 issue conveyed but using different characters and there has been no evidence of this story living up to the anniversary we are celebrating. Do we really need two separate issues to set up what isn’t exactly the most difficult plot to grasp? I am already sold on the concept DC. Believe me. I want it all in my eyes right now. Don’t oversell and under deliver.