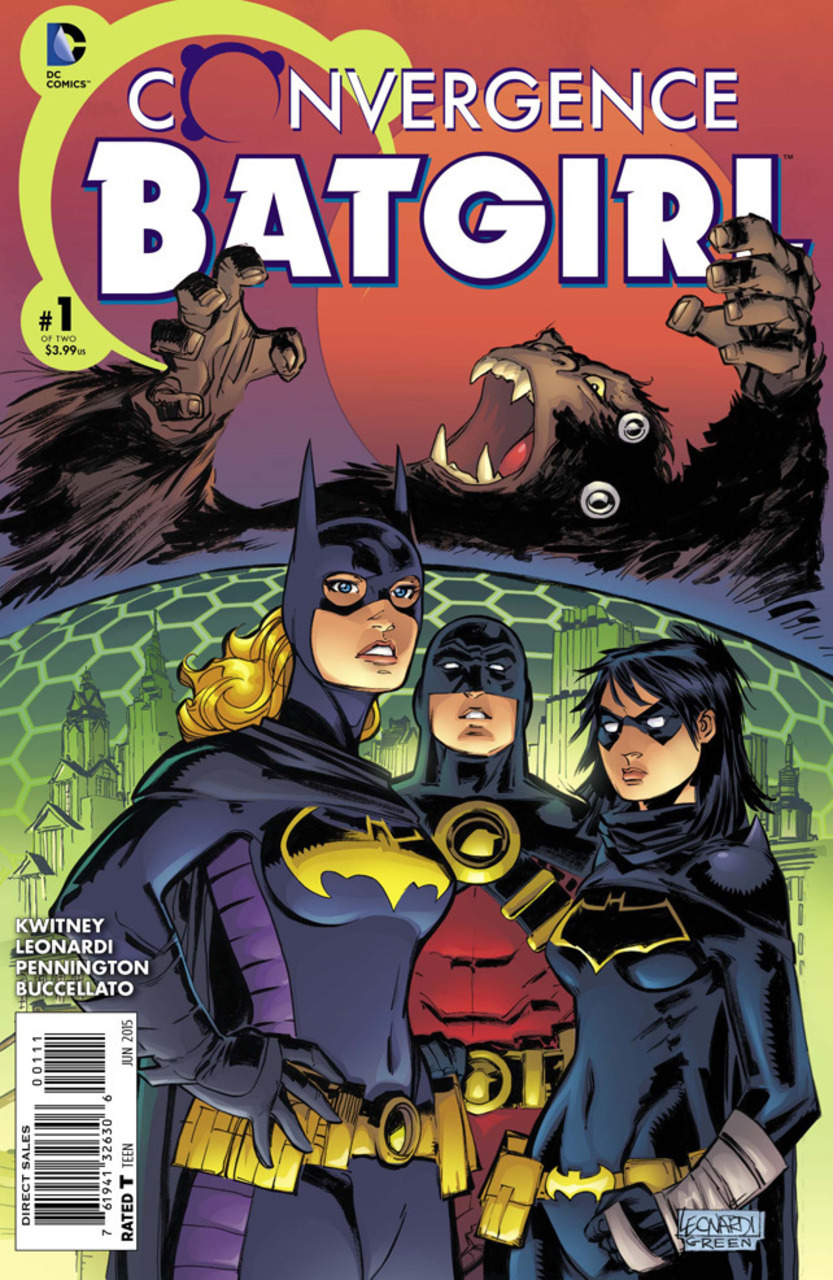 THE PLOT:  One year ago Gotham City was trapped beneath a mysterious dome. Stephanie Brown a.k.a. Batgirl soon gave up her costumed identity. A year later, and she is summoned to help battle for the fate of the world, with Red Robin and Black Bat alongside with her. They are soon set upon by Catman and Gorilla Grodd.

MY THOUGHTS: The question central to my reading experience of this issue is this: “Is it more important to have your favorite characters back or back and written well?”

It’s an incendiary question, calling out the efforts of the writer and storytelling immediately in a way which fashions the reader (me) to be a prickly, perma-unsatisfied fanboy who can never enjoy what he has in front of him. No matter what the future holds for this book, I’m always willing to have my opinions called out in this manner whenever they need to.

The fact remains that this is my central conflict with this issue. I have Cassandra Cain and Stephanie Brown back, should that alone be enough? In some ways yes because I know that they’ll never appear like this again once Convergence ends. Along with Batgirl, I picked up a lot of the other Convergence books in my excitement for the return of pre-2012 DC, and in some cases I really enjoyed seeing my friends again. They were all missed, even if I wasn’t reading their adventures at the time. Cassandra’s possibly my favorite character however, so just seeing her in a comic that focuses a lot on her would never be enough. But this is truly Stephanie’s comic, which is fine. I think the three main players of Steph, Cass and Tim is a good team for a nostalgia book. Tim takes a backseat for much of the issue anyway, which works since he’s still very much visible in the New 52.

But as I’m reading the story, things aren’t clicking with me as fast as I’d want them to (which right away betrays the sense of entitlement I have for these characters). Stephanie’s really tetchy and Cassandra’s very robotic in how she communicates. I’m finding myself having to readjust my line of thinking when it comes to these characters. This isn’t Batgirl vol. 2 #25 that picks up right where Bryan Q. Millar left off. This is Batgirl under the context of this Convergence arc where everyone in Gotham has been slowly going crazy trapped under an intergalactic cup. In a lot of ways it’s reminiscent of the Simpsons Movie from 2007.

So we have Stephanie Brown, newly returned to the Batgirl mantle, feeling neurotic, insecure and unsure of herself. Sound familiar? This book is very explicit in illustrating the premise of the Stephanie Brown character that in terms of affectation, she was never high in the ranking. I question how is that relevant since she more than proved her worth during her own series. In some ways it’s like Gail Simone’s first arcs on Batgirl, in other ways it’s like Batgirl as written by Marv Wolfman during Crisis on Infinite Earths. It’s a sense of despondency which is unattractive in established superheroes. Stephanie has been around for 20+ years, there’s no real need to fake a concept that she’s not good enough as a crime fighter. It’s an idea thoroughly explored in her title back in 2009, which makes me unsure as to who this issue is being meant for: fans of that title or people who don’t know about Steph Brown. If it’s for the latter, just advertise the trade paperbacks of her series!

So okay, Steph’s feeling worthless in this story. It doesn’t make much sense, but it’s the story we’re given. Beyond the premise, I think Steph’s more or less on point character-wise. Cassandra on the other hand is a predictably woeful other story. In an interview, Kwitney described Cass as someone with the personality akin to Mr. Spock, which is a grave misreading of her character. I’m not wanting or telling writers unfamiliar to read the same amount of comics I’ve read in order to better know the character (although they should) because that would be ridiculous. At the same time, the amount of shorthand writing with Cass could’ve been fixed by barely glancing at her own title once. Cassandra’s personality is a lot more zestful and energetic than it’s being depicted here, and that sucks. It’s a watering down of her character to just write her off as this emotionless martial artist. I’m not surprised though. Cass’ character has been in turmoil since her series ended. She’s never really been written with the same consistency as she was back in ’06, but I did like her appearance in Gates of Gotham. There she was interacting with the Bat-Team in a way that didn’t have her as stand-offish and stoic. I understand to a degree that without reading Cassandra’s series, it’s hard to get a bead on who she is. In team-up books or crossovers she’s routinely been presented as a silent fighter. But that’s not why she has fans. If DC paid attention to exactly why she’s much beloved by the fan base, it’d be a lot easier to write her better and have her show up in more stories.

This is all just from my picky mind, however. I can’t speak for all Cass fans, so I might be in the minority opinion. There is one scene in particular though which I feels highlights my disappointment with this issue. It’s in Steph and Cass’ apartment where they get into a heated argument over cooking and eating the Guinea pig that they decided to breed in case their food rations wore out.

I had to re-read this scene a few times to wrap my head around how such a bizarre and wack scene could be scripted. Tensions are high, food is low, and there’s an underlying sense of contempt between Steph and Cass since Cassandra still fights crime and Stephanie doesn’t. It’s brought on by Steph’s lack of self-esteem and knowing that even when she was in shape she couldn’t out-fight Cass. So for the most part the scene makes sense. The fact that the two characters in the Bat-Family that have been missed the most are brought back in an issue where they fight over cooking a pet animal is really unsettling. It shows a lack of consideration that I think goes back to my central question earlier. I love seeing Steph and Cass together, but they’re shown to be at odds for the most part. It’s unpleasant, and chips away at their characters in an unnatural way. We’re put smack-dab in the middle of this odd storyline involving a cosmic dome, so we’re told to buy into these tensions we’re being shown. As a result, it’s very difficult to both understand and enjoy seeing your favorite characters like this. It would be too much to have the issue be nothing but a Cass/Steph love-fest where the two are skipping through the city, laughing it up and fighting hoods. That doesn’t mean nuance your story by adding tension and drama. It forces the reader’s reaction to go from a “Horray!!!” to an “…oh.”

Artwork wise, this isn’t very good. Rick Leonardi worked on the Dylan Horrock’s run of Cassandra Cain’s title in the mid-2000s, and I liked his work there. It’s a lot less refined and scratchy looking here, which happens to a lot of long time artists. It’s past its prime. Dustin Nguyen would’ve been a better fit since he’s a fan of both characters. Speaking of other creators, I have to say Stella was right in this book needing to have been written by Bryan Q. Millar. Why wasn’t he contacted? If you’re going to make a book about old characters, grab the guy who worked on them last, especially when he was still giving you work as of Smallvile Season 11 less than two years ago.

I actually feared I was going to hate this a lot more than I did, and I’m still keen to see the second issue. But in the realm of asking if it’s better to have a character back or to have them be written well, the latter must always be the better choice. This isn’t horrible by any means, but it’s a bit disappointing and lacking in sufficient foresight when it comes to delivering fan favorite characters back from limbo after so long. If you’re going to do it, don’t do it absent-mindedly.