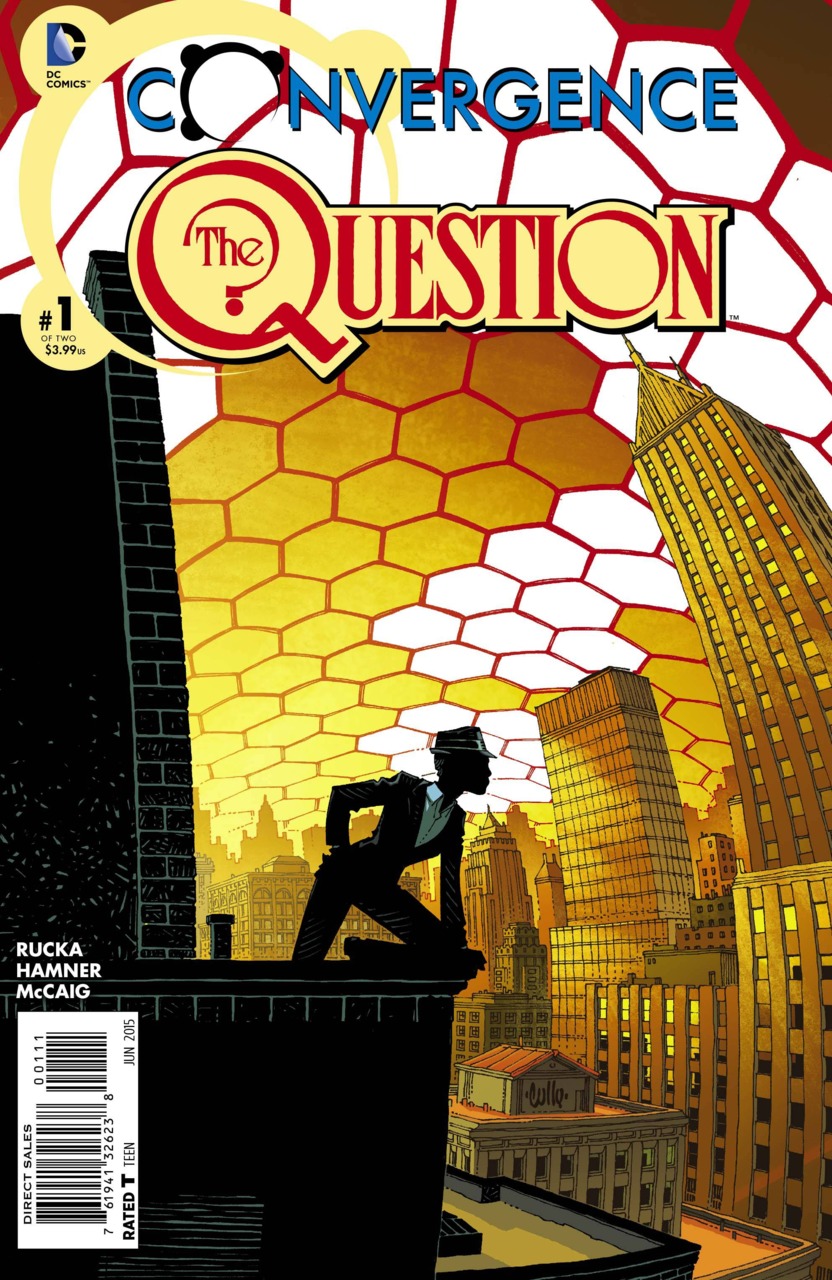 Just One More Thing Part 1 starts with a monologue voice over remembering the time of No Man’s Land. We see scenes that include Montoya’s Grocery, street violence, damaged windows but overall a pretty deserted city. The voice over describes that what really happens is that the population is put in a cage. When people are put in a cage they fight over everything whether they need it or not.

We zero in on a pharmacy where we see what looks like a woman outside. Inside the pharmacy there is a standoff, one man facing off with three men. We quickly learn that the one man is in fact Two Face. The fight starts with Two Face easily beating the three other men. After the three men are bloodied and on the floor, Two Face takes out his coin and flips it, presumably to determine the final fate of the three beaten men. After Two Face catches the coin and looks at it, not showing the result to the reader. We can only assume that the coin landed on the good side as we see the three men limping away outside the pharmacy. We still see the woman in shadow crouching behind some cars in the parking lot. The woman enters the pharmacy carrying a sword. We see that the woman is Renee Montoya and Two Face was after morphine injections. He hands the morphine to Montoya to take to Saint Luke’s.

We cut to Saint Luke’s hospital where Montoya, still carrying her sword, enters the waiting room where she hands the morphine to the nurses. She stops off at the bed side of her father Hernando Montoya.

We cut to an apartment building where another shadowy figure climbs the fire escape. It is the Huntress entering the apartment through the window with the mundane greeting of “Honey, I’m home.” Off panel another voice asks how the day was at the office. Huntress responds with “you know the same.” After some small talk that reveals that the Huntress was on patrol we learn that the apartment is Montoya’s and she is in the bathroom looking in the mirror. Huntress states that the mark is gone and it’s not coming back. Renee tells Helena that her dad is dying. Renee talks about Two Face helping her find the morphine to deliver to the hospital. Helena is worried that he cannot be trusted. Renee is heading out for the night.

In another location, we see yet another shadowy figure. It is Two Face with a gun and holding his coin. He flips the coin while holding the pistol to his head. The coin turns up heads. It is always heads; apparently as Two Face performs this ritual daily. Just then we see in the window The Question. From the attire, The Question is Renee Montoya. Two Face asks her if it is her behind the coin turning up heads. She denies it. Harvey says he will try again tomorrow. If it is tails he will kill himself. The Question says that it will be heads. Harvey asks if it is tails will The Question try to stop him from killing himself. Eventually Question answers that she will not just try, she will succeed. It is revealed that Two Face does not know the identity of The Question. Question takes the coin with a wager, good side she lives bad side Two Face will kill her. Harvey protests but she flips the coin. Harvey catches the coin in his fist and at first does not look at it. Question tells him that he has to look and when he does it is good side up.

It is unknown why the coin keeps landing on the good side. Question surmises that it might be the doing of whoever took them and maybe where they are located. Just then they hear a loud voice and from the art, it shows Harvey and the Question covering their ears. It is the statement that is in all the Convergence books. The voice says that all the cities have been taken to an unknown planet and placed under individual domes. Now the domes are being lifted and champions for each city are being chosen for a fight to the death. The winner determines which city lives and which dies. Two Face goes for his gun expecting to be faced with another Harvey Dent. He wants this other Dent to kill him. Question stands in his way. Harvey tosses his coin and hits Question with the butt of his gun knocking her out and leaves. As Montoya wakes up, Huntress helps her up. Question says that they have to stop him. Huntress expecting this starts to say that she has called in back up. Question says that there is no time to call for back up. That back up is already there, it is Batwoman. Next three badass women, two Harvey Dents, one inevitable conclusion!

There really is not much to say about this issue. We know that the city is Gotham and the time is at least post Infinite Crisis and pre-New 52 from the fact that Montoya is the Question and we see Batwoman. Other than that we have no indication of what earth this Gotham is from and little is made about the dome unlike some of the other books.

I have more questions than answers but I am looking forward to answers. What earth is this? Who is the chosen champion? What will happen next?

There is not a lot of action but there was good character development especially with this Harvey Dent. I am curious as to the relationship of the Huntress and Renee. Are they living together and if so are they lovers? It was reveled in New 52 that Batwoman and Renee were lovers themselves at one time. I am interested to see where this is going.