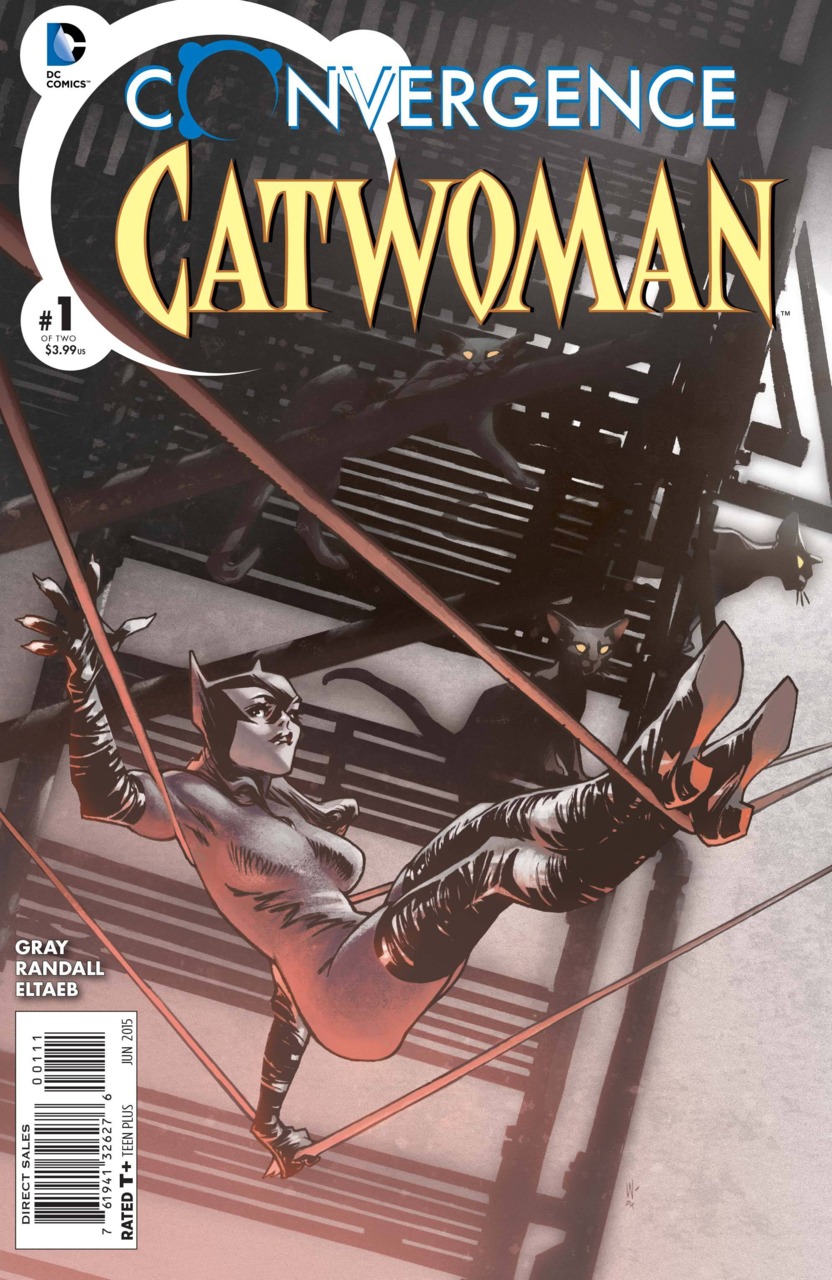 In pre-dome Metropolis Catwoman crashes down through the glass ceiling of a rich heiress’ penthouse in search for the heiress’ diamond necklace and earrings. Unfortunately she has been beaten to the punch by a team of roller derby thieves who are in the process of kidnapping the heiress. Catwoman fights off the team and saves her from kidnapping when the Convergence dome falls, destroying some buildings in the process.

A year later, Metropolis has been in chaos since the dome fell without the superheroes to protect it.  Catwoman fights off a squad of amateur mercenaries who fancy themselves crime fighters by hunting down criminals in Suicide Slum. Bruno Mannheim has taken doctors and pharmacists under his ‘protection’ and is making a fortune producing and selling pharmaceuticals to Metropolis.

Mannheim has kidnapped Sally, a chemist under Catwoman’s protection. Catwoman breaks into the medical facility and rescues Sally escaping to the top of a nearby building. Suddenly the now-familiar words of Telos ring out “Citizens of my world…”. Catwoman listens in shock to Telos’ plan for the worlds and is not surprised when Kingdom Come Batman arrives for battle with her in next month’s episode.

I found all of the segments of this story to be interesting enough, well told and drawn. Catwoman is an engaging character as she usually is. However, I’m not sure how all the pieces fit together as a coherent story line. Is Catwoman’s rescue of the heiress important? Beats me, it isn’t referred to again once the tale is told. I suppose it is interesting that in the absence of paintball self fashioned crime fighters are taking the law into their own hands but is that really integral to the Convergence fight? It appears that Bruno Mannheim is going to get his guys ready for a fight once Telos’ words are spoken. Is this a key plot point? Are any of these separate segments important to the story or is it just a bunch of stuff to provide background? I don’t know, but maybe next month’s book will explain more. Here’s hoping.

However, the story is clearly drawn and each of the segments are fun in themselves so it is an enjoyable enough read. Also, bonus points for Snake Plisskin references.