Review: Convergence: Batman and the Outsiders #1 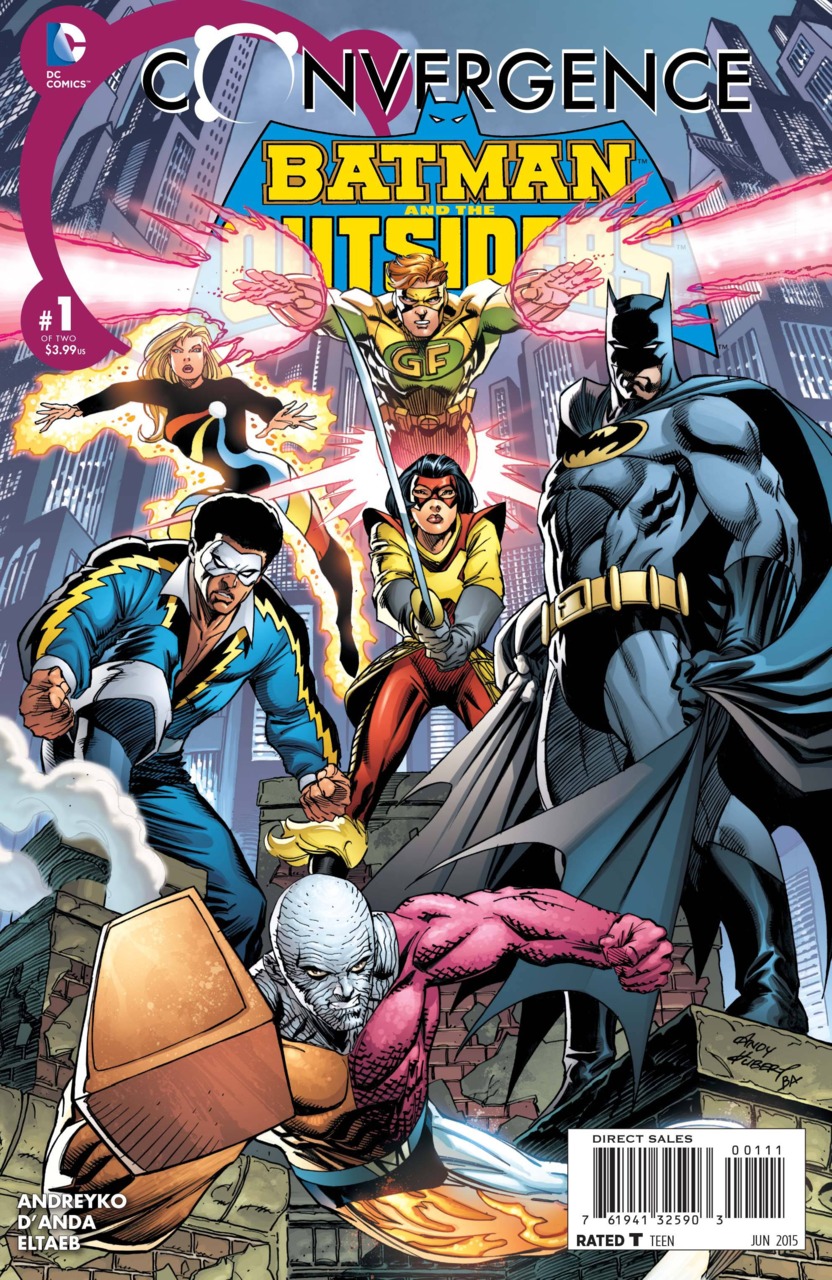 Taking us back to a time prior to “Crisis on Infinite Earths,” this week’s one shot issue opens with a flashback sequence of Batman and the Outsiders battling against Kobra and his minions. Batman’s voice over on this page talks about the uniqueness of his Outsiders team and how they are good soldiers. We then cut to the present where Batman is standing atop of roof in Gotham City and it is now Day 364 of being underneath the Dome. As he thinks that good soldiers need to learn how to adapt, he jumps down onto the street and is startled by Jim Gordon…yes, Batman is startled. As Jim jokes that he owes him another 100 times for startling him, the two talk about their situation underneath the Dome and how Batman is still no closer to finding out who has captured their city.

Across the city we get caught up with the various members of the Outsiders: Black Lightning is helping to restore and enhance the city’s power grid; Katana is seen visiting Leslie Thompkin’s clinic and checking up on Halo who has been in a coma every since the Dome came down; Geo-Force (who is still lamenting his sister Terra’s death) is busy helping construction crews, and then arm wrestling some of the workers in a bar later on; lastly, Metamorpho has regained a human appearance due to the loss of his powers and is now happily living with Sapphire Stagg.

Back in the Batcave, Batman is again hard at work attempting to discern some clues as to what happened when the Dome was erected…he and Alfred even discuss how the World’s Greatest Detective needs clues to solve a mystery, something that he does not have.

As a new day dawns, the Outsiders seem to be living their lives as normally as possible…when the unthinkable happens. A ringing voice echoes across Gotham City – it is Telos. And he speaks of a competition between champions; various cities will battle against each other and only one will come up the victor. As the Dome begins to fall around them, the metahuman abilities of Black Lightning, Geo Force, Metamorpho and Halo begin to return. As Sapphire recoils in pain by being burned by the newly returned Metamorpho, an explosion rocks Leslie’s clinic as Halo regains consciousness.

The issue ends with Geo-Force flying up into the air in order to get a better look at their surroundings…however it reveals that their opponent in the tournament is now upon them – OMAC.

Well I have to say that I really liked this issue! I was never one to read much about the Outsiders, namely because I didn’t have much knowledge about them…however I was pleasantly surprised that I knew who everyone was in this story and it was interesting to see how they were adapting to life underneath the Dome.

I feel like I should be getting a little bored with each of these 2-Part miniseries…but I’m not. Although each story shows us a different character or team living life underneath the Dome, and then finding out about Telos’ weird Hunger Games scenario…I am finding myself intrigued by what each of our heroes or villains has turned into with the loss of their powers or the absence of major crimes.

This story shows us that to the full extent – each member of the Outsiders is adapting in a different way. Black Lighting is helping out the city in a positive manner while Geo-Force seems depressed and is still caught up with Terra’s death. Katana is shown visiting a comatose Halo and it isn’t really expanded upon at what she has been up to. As Batman continues to dig deeper into the Dome’s mystery, Rex Mason is finally living his happily ever after with Sapphire Stagg.

Of course this all comes quickly crashing down with the proclamation from Telos and the destruction of the Dome. I think it will be interesting to see the Outsiders comes together to battle against the Pre-Crisis OMAC…a character that I am not too familiar with and have honestly only ever seen him on an episode of “Batman: The Brave and the Bold.”

Overall I liked getting to see how this team is living life under the Dome and how some are happy while others can seem to adapt. Batman as always is continually pressing on to find a solution to their problem and it will be nice to see him bring this team back together and take on OMAC.

Also, a quick note about the recaps at the back of the issues – I love these! Although the first few weeks dealt with some timelines that I am familiar with, it is nice to see some clarification on characters that I have only heard about or read about in a single story.