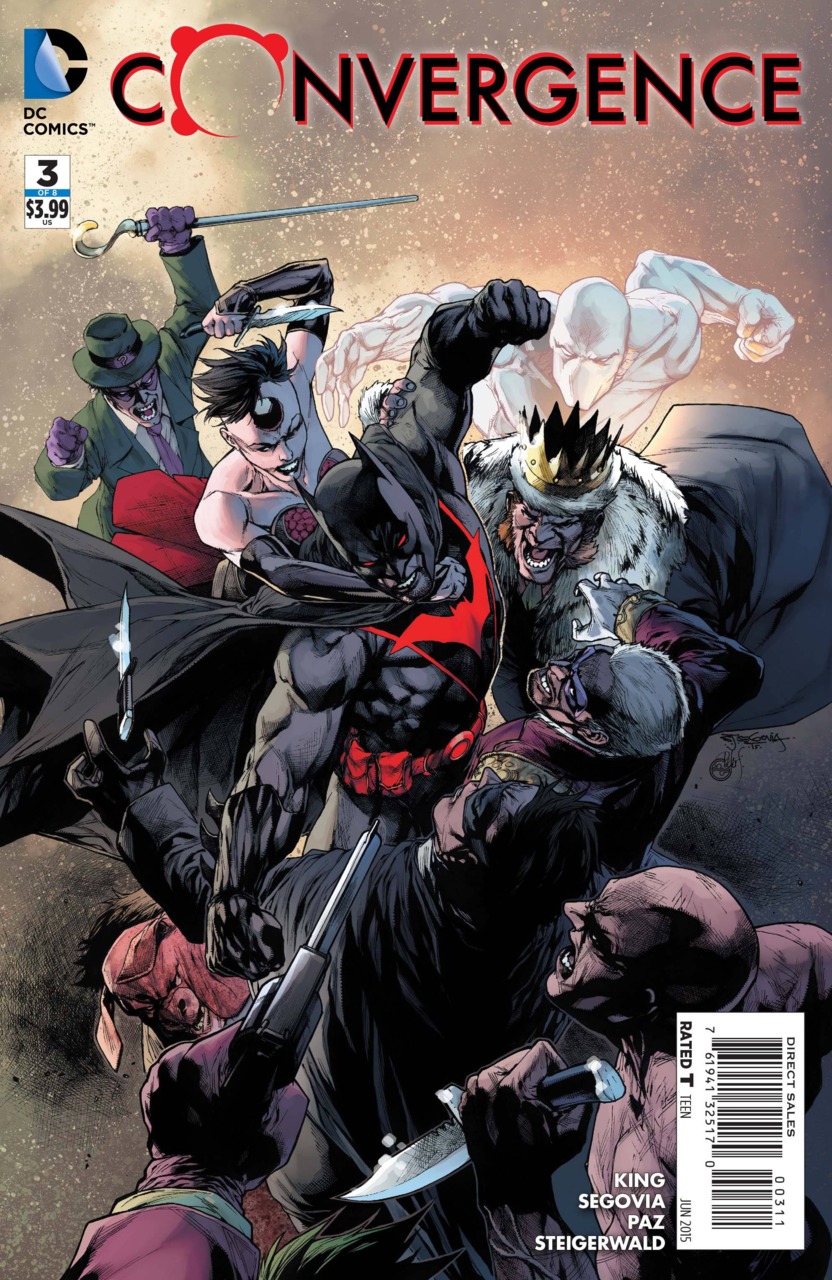 The slow burn of this series has been sparked into a wildfire with it’s third installment. As Superman, GL, and The Flash are split up upon finding Deimos at the end of last issue, Batman and Dick Grayson are still on their journey to them from Pre-New 52 Gotham. GL and Superman are attacked by Telos’s drones from underground trying to prevent them from finding whatever it is underneath. Batman then shows up with the batmobile and saves the day wrecking the car in the process.

Deimos explains to them that they must get underground if they want to find a way off the planet. Batman tells them to go on without him as there is something he has to take care of. GL tries to get him to come with him but he rebuffs and Team GL leaves the area with Deimos. Dick Grayson stays behind with Batman and wonders what it is he has to take care of. Batman remarks that something has followed them from Gotham.

As they approach the center of the earth Deimos with Team GL remarks how the forces of nature work differently down here and Telos may not be able to succeed in ruling what is down there and that they must get it in their control before Brainiac returns. It is revealed that in the center of the planet is the one and only mapless fantasy land of Skartaris. We are then shown how time travelers such as the Monarch have been locked away within it to keep them away from Deimos so he cannot get to them.

Batman remarks to Dick Grayson that whatever followed them from Gotham probably isn’t good and it is up to them to buy the group some time to find a way to defeat the planet incarnate. They are quickly proven right as it turns out that Dr. Hurt, The Riddler, a not dead Flamingo, Manbat, others have followed Thomas and Dick thinking he was their Batman but they are mistaken.

As the fight erupts Thomas makes an outright awesome deduction as Flamingo chides him about how the real Batman wouldn’t turn his back on him. He tells the formerly dead villain that he has already won this fight because Flamingo has no strategy to expect from Batman while they trade blows. As Thomas and Dick are soon overrun by the villains, Dr. Hurt remarks how they will first kill this Batman and then find their own. After one of the coolest moments in all of comics in my opinion happens in Thomas saying they will never hurt a Wayne again and then makes the ultimate sacrifice in blowing the group to hell with bat grenade. I must admit while it was quite abrupt, it was AWESOME. Afterwards Dick’s strange exposition kicks in as it did in the last issue and really feels kind of out of place. I think it is because it makes him the main character of this series and he really hasn’t earned it.

As Dick crawls towards Thomas’s lifeless body he is paralyzed by a gun shot from the one and only Pre-New 52 Joker. The Joker taunts Dick by saying that him letting himself get shot by the clown price of crime makes Thomas’s sacrifice meaningless. Out of nowhere Telos shows up from behind the Ace of Knaves and snaps his neck while remarking how he is a menace and a disease in every timeline. Telos then demands Grayson tell him where the others have gone to.

So wow. This issue was definitely a sign that this series is ready to get busy living or get busy dying. Just a few thoughts:

1. Skartaris being the thing that may be able to defeat Telos tells me that after last issue when we saw the remains of cities and even a court of owls mask that this may infact be a post apocalyptic earth of some kind as the fantasy realm is what is normally found underneath the earth in the DCU. How this plays out will be interesting.

2. I wonder just how long the Monarch has been imprisoned and of course who is under the mask. Before and during Final Crisis his roll was much like that of Telos in this story in traversing the Multiverse and of pitting different versions of characters against one another in order to make a team of characters across the multiverse. Is it possible he may be one of the characters that have been immune to the changes of Flashpoint?

3. I know that this series may be hard to swallow for some of you fans that haven’t been fans for quite a long time. I am willing to bet very few know who Deimos is and probably refer to him as the guy who somewhat looks like Marvel’s Doctor Strange. But he is incredibly powerful and incredibly dangerous. And he is a villain, so whatever he has planned will be turned on it’s head.

4. I would implore anyone who is overwhelmed by this series and needs help understanding that before they read the next issue they should read Future’s End/Convergence: Booster Gold and Justice League #40. Those 3 issues aside from explaining who Deimos is will really help you understand the stakes of what is happening here.