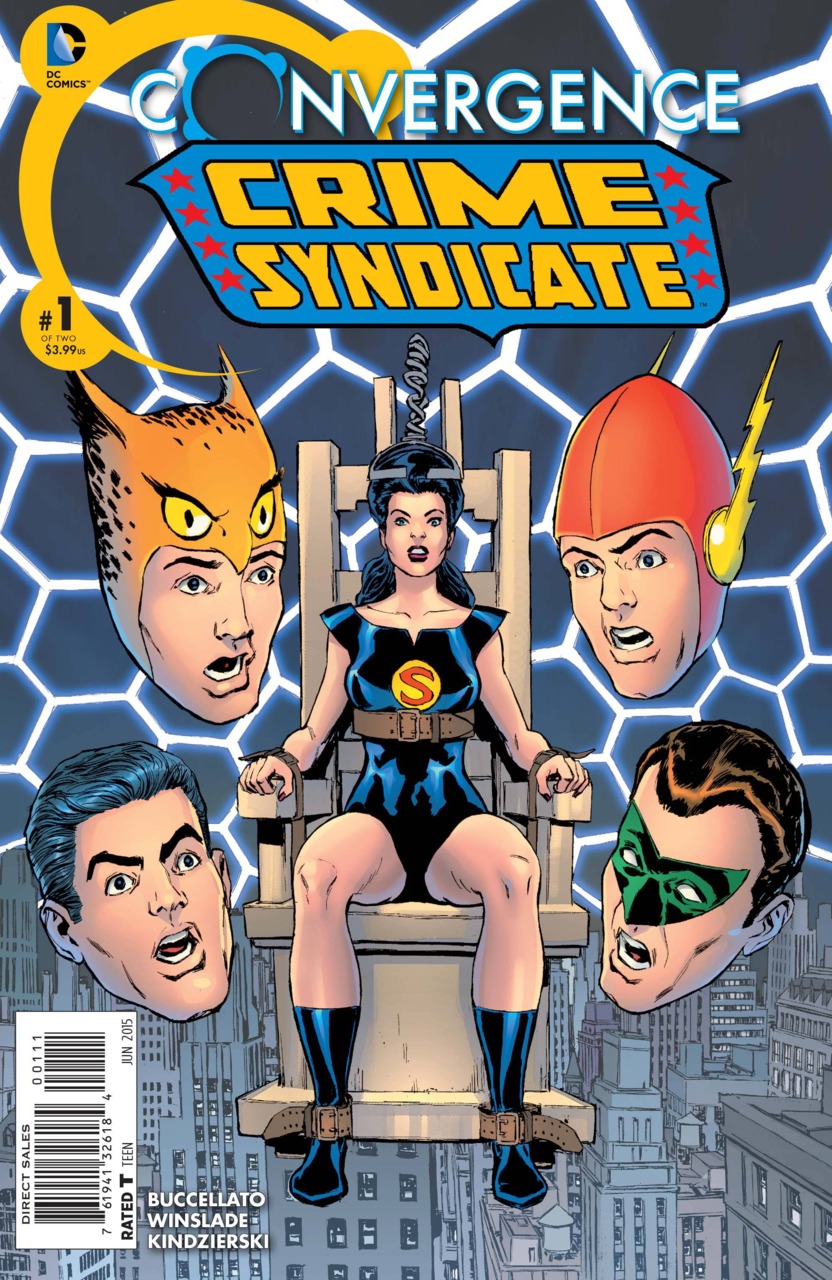 At a time before the events of “Crisis On Infinite Earths,” this issue opens with Superwoman (of the Earth 3 Crime Syndicate) writing a letter and talking about her time within the team and about her teammates Ultraman, Owlman, Power Ring and Johnny Quick. She gives a brief history on how the Syndicate first met the Justice League from Earth 1 and compares the two…she ends with a conclusion that states that she and her fellow villains chose “the easy way out.” As she continues to write, it is revealed that Superwoman has been imprisoned and she is set to be executed.

Outside the prison, the remaining members of the Syndicate (all powerless thanks to a certain Dome erected around Metropolis) are breaking into the prison in an attempt to rescue their captured friend.

Cutting to the 853rd century Metropolis, we return once again to the heroes of “DC One Million” who seem to be arguing over the death of someone named Owlwoman. It is revealed that the former heroes (also powerless thanks to the Dome), were attempting to stop the villain Lincoln Luthor from seizing control. As the One Million Batman seems to be arguing to use lethal force against their target a bomb suddenly detonates that kills the One Million Atom. As the heroes recover from the shock, Batman is found to be missing.

Back on Earth 3, the Syndicate members run with guns blazing across the prison yard only to be halted by the Rogue Hunters (similar to the Flash’s Rogues from Earth 1). As the Syndicate and Hunters clash with each other, the scene is intercut with Superwoman being led to the electric chair. As Owlman gets knocked to the ground by the Earth 3 Captain Cold, a lever is pulled and Owlman knows that they are too late to save Superwoman.

Returning to the 853rd century Metropolis, Batman is seen stalking several of Luthor’s men who seemed to have tracked the location of the Justice Legion Alpha…but as he pursues them he is accosted by the One Million Superman who is still set on not killing Luthor. During this time, Batman and Superman continue to fight…while the Crime Syndicate is shown in handcuffs and is being led away. In this moment however, Telos broadcasts the usual message of competition between the various cities and the villains realize that their powers have returned to them. A quick flash engulfs both the Syndicate and the One Million heroes and they are transported away.

In a seemingly abandoned section of 853rd Metropolis, the Syndicate members are shown in various locations…as well as the One Million Wonder Woman, Superman, Batman, Flash and Aquaman. As Power Ring and Johnny Quick meet up, they briefly discuss how they didn’t manage to rescue Superwoman. They also question whether they should fight for a city that they don’t care about. Elsewhere, Owlman comes to the same conclusion and decides to slink into the shadows as he doesn’t care whether a city lives or dies.

The issue then closes with a shot of One Million Superman flying through the air and deciding that he needs to find the other Legion members and devise a plan…however this is quickly forgotten as he is slammed into a building. It is then revealed that Ultraman was responsible and is prepared to take on the Legion by himself.

As my only encounter with the Pre-Crisis Crime Syndicate of Earth 3 was the short appearance that they made during the original “Crisis” storyline, it was interesting to see how they differ from the deadly and vile monstrosities that were showcased in DC’s “Forever Evil” storyline.

At some point prior to the story, Superwoman is captured and sentenced to be executed…something that I’m sure came about due to her lack of powers under the Dome. However, I have to wonder if she is truly dead. Although it was alluded to that she was electrocuted prior to the Dome coming down…it wasn’t explicitly shown. Also, with the return of the super powers…it is possible that she was healed or maybe revived? Who knows? But I wouldn’t be surprised if Superwoman shows up next month to help fight against the One Million era heroes.

Speaking of, it was nice to see the return of “DC One Million” and the various heroes that were involved in that story. Batman and Superman seem to be at odds for some reason and there is a brief mention about the death of Owlwoman…not sure who she is, but I assume it was a Justice Legion Alpha member who must have been lost in their attack upon Lincoln Luthor. I have to admit that seeing Batman and Superman at odds…is nothing new. Been there, done that. Just seems sort of odd to me to have two heroes not getting along, right before they get dropped onto a battleground and are told to fight off a bunch of villains.

Overall this story was okay; I actually really loved the art…very reminiscent of both time periods where this book takes place. But, the story seemed to fall a little flat…although the Crime Syndicate story seemed to have a bit of momentum with the crew trying to rescue Superwoman, the One Million heroes just seemed disorganized and boring. Hopefully the creators will be able to pull off a good ending to this story next month.