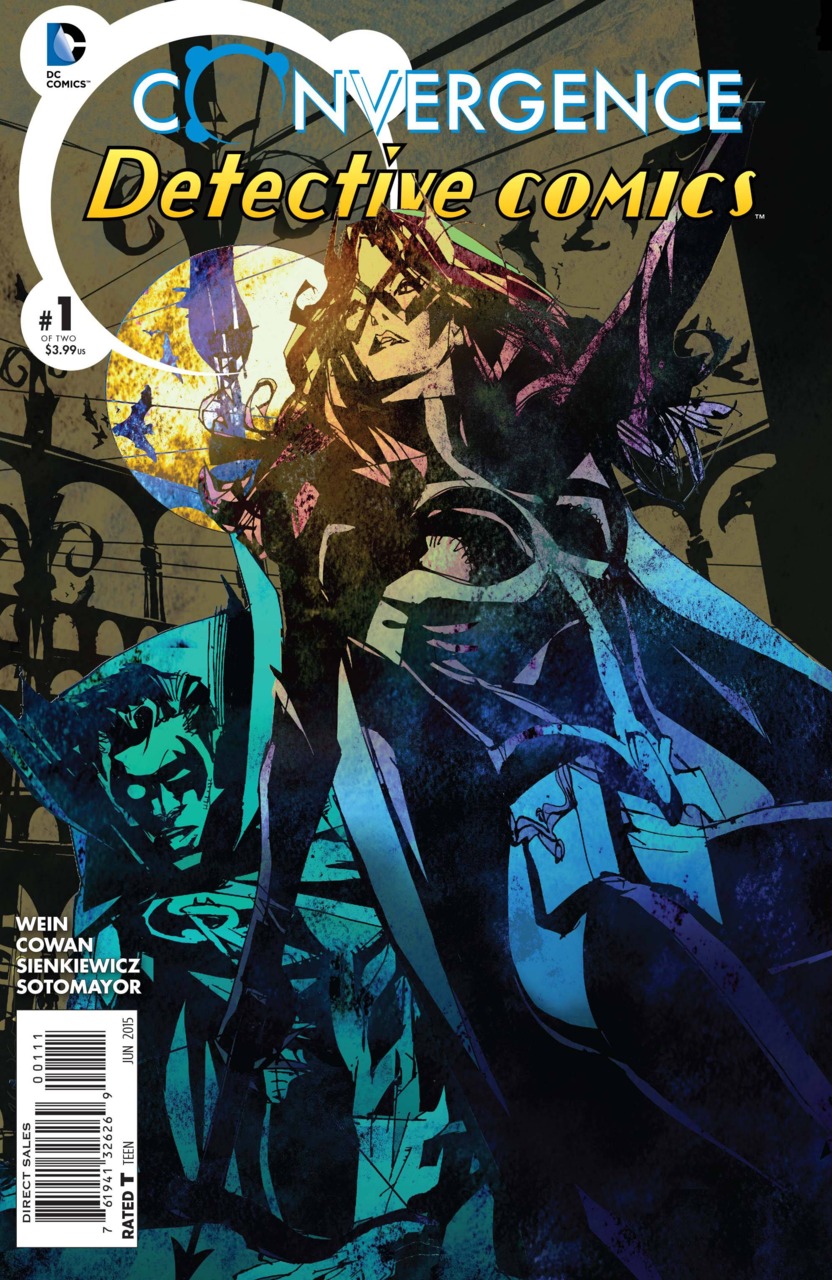 Convergence: Detective Comics tells its story in a different way than the other issues. We learn more about  both sides of this confrontation and get a good characterization of both sides as well as both worlds. The focus of this issue is Earth-30 which is the Red Son Superman universe and Earth-2 just prior to the outbreak of the Crisis of Infinite Earths.

We open “Powers and Responsibilities” not on Earth-2 as what would be expected but rather Earth-30 in early spring. We get exposition describing the origin of this Superman as he flies over Moscow. It is National Superman Day and Superman is doing a fly by for the people he himself has chosen to honor him. This is the day the dome came down over Moscow and Superman crashes into the arms of a statue of Lenin.

On Earth-2 interestingly also in early spring we see the Batmobile speeding from Gotham to Metropolis. Dick Grayson, the adult Robin is driving with Helena Wayne; the Huntress who is also the daughter of the late Bruce Wayne is the passenger. Robin decides to drive to Metropolis instead of flying because of the crimson skies that became the hallmark of the Crisis. The heroes are on their way to Metropolis for an emergency meeting of the Justice Society of America but it is unknown why the meeting will be Metropolis and not at the usual headquarters of New York. The two arrive at the Metropolis HQ just as the dome descends over Metropolis.

It is four months later in Moscow. In order to pacify the nervous population, Superman and his rival Pyotr Roslov make a tour of the city to reassure the people. People are still cheering Superman but as time passes more and more people begin to turn away. Superman notices this turn of events and discuss the times with Roslov. Roslov reveals to the readers that attempts have been made in secret to breach the dome but have resulted in failure. Superman vows to keep trying.

Four months later in the Metropolis branch of the Wayne Foundation Dick and Helena are discussing the preparation style of Bruce Wayne. Bruce’s preparation even included a Batcave under each branch of the Foundation, Metropolis is no exception. Helena receives an emergency alert from the JSA. Dick and Helena make their way to the cave. They separate to suit up. Helena as the Huntress and Dick puts on his hybrid uniform of Robin and Batman. This is the uniform Dick has chosen since the death of Batman. Huntress chides Dick saying that her father would have wanted Dick to become Batman after his death. Dick cannot do it; he does not feel worthy to take on the mantle of the Bat and even suggests that Helena take up the mantle herself. We do not know what the emergency is. This scene appears to be here just to show Dick’s misgivings about becoming Batman. I also liked the relationship of Helena and Dick here, they are truly brother and sister and they do not change in front of one another.

Eight months after the Dome drops over Moscow we see a speech being delivered by Superman. Superman reveals to the crowd that he actually dropped the Dome over the city to protect it from an alien invasion. He even appears to lift off from the stage to fly away. It is revealed that his ability to fly was really the result of being harnessed to a news helicopter to give the appearance of flight. This display was created to quell a possible population revolt as a result of the Dome. It was designed to calm the population calm but Pyotr is not sure for how long.

Back at Metropolis presumably eight months after the Dome dropped we see Robin and Huntress fighting the Toyman who is in a giant army toy robot. The pair easily takes the robot down and arrests Toyman. Robin makes a quip about enjoying this job which Huntress promptly banters that she will remind him that he said that.

Twelve months into the Dome captivity of Moscow, Superman not in uniform is seen strolling in the cities. He is thinking about how far the city has fallen in the past year. Resources are running out and the city is being defaced by graffiti. Most are defacing posters of Superman. Superman removes his hat and a little girl recognizes and praises Superman. The crowd starts to press in when Telos gives his announcement about the Domes being removed and Champions will arise. It is interesting that Telos calls the Dome his after which one of the people remarks about Superman’s speech four months earlier in which Superman only responds as long story. With the removal of the Dome, Superman regains his powers and he takes off as the champion of Moscow.

Also in Metropolis at the Wayne Foundation, Helena and Dick are discussing the legacy of Batman. Helena believes that Dick should become Batman, Dick is not so sure. Again we get the brother and sister relationship of Dick and Helena when Helena says that her father loved Dick as a son. The Dome suddenly starts to talk, giving the message we have heard before. Dick and Helena immediately change into Robin and the Huntress and meet at the Batmobile. They discuss the entities call to commit casual murder. Dick states that they “haven’t done it yet and there’s plenty of time to figure a way around it”. The car races through the tunnels Bruce had built beneath every major city. Dick activates the camouflage escape exit and soon realizes that they are no longer in Metropolis. Rather they are in Moscow and from the floating Red Son Superman in front of them; they are in the Earth-30 Moscow.

Superman asks Robin and Huntress to leave the vehicle. Instead of exiting the vehicle Huntress fires two missiles at Superman. The missile hit Superman, Robin accuses Huntress of killing Superman. They should have found another way because they do not kill. Huntress responds by saying that in order save the planet, Batman would have made an exception. Superman is not killed and states that he was hoping that they could work with each other to solve their problem but after the attack, he is not sure anymore. Robin immediately works to smooth over the situation. Superman is still willing to discuss their situation as “civilized human beings”. Robin and Huntress continue to argue over this approach as Robin exits the Batmobile. Robin and Superman shake hands and start to discuss a way to save both worlds when Huntress charges ahead in the Batmobile to escape. Superman chases her as Robin calls to him not to hurt her. The crowd closes in on Robin and he grapples out of the area to save his own life.

Huntress is trying to put some distance between her and Superman until she can find a way to take Superman down. Superman catches her and lifts off with her still in the car. Superman appears to still want to talk. In order to escape, she detonates the Batmobile in front of Robin presumably killing herself. Next issue War and Pieces.

This issue appears to be more of a character piece prior to the action I am expecting in the next issue.

I liked opening not in the familiar Earth-2 but in the less familiar Earth-30. It appears we get more info about Superman than we do about Robin and Huntress. The back matter of the issue focuses on Robin and Huntress of Earth-2; there is no discussion on the Red Son Superman which I would have liked to have seen since we see him as much if not more than the Earth-2 characters there probably should have included a blurb about him in the back of this book. It is possible we may get this in issue 2, we shall see about that.

Red Son is an Elseworlds Superman miniseries which focuses on what would happen if his rocket does not land in Kansas but instead lands in the USSR. How would Superman be different? Superman in this issue is depicted as the leader of the Soviet Union which is what happens in the miniseries. It is interesting to see Superman work in secret and lies to keep the population calm. From a quick skim of the original miniseries, we do see a Superman who would not be so quick to kill but would rather look for a peaceful alternative.

I do have a problem with the characterization of the Huntress here. I especially do not like her actions in the closing scenes of the book. I have a problem with this Huntress shooting first and asking questions later. She even abandons the man she basically called her brother leaving him alone with Superman whom she is certain cannot be trusted and must be killed in order to save her world. I do not see Helena Wayne, the daughter of the master detective Bruce Wayne behaving like this, especially since her own mother is the reformed Catwoman. I believe that she will be with Robin in finding a peaceful solution to this especially since she and Dick do not have powers like this Superman has. This is the way I would expect the post Crisis Huntress, Helena Bertinelli to act.  I wonder if this writer confused the two characters

I enjoyed the banter Dick and Helena had in the beginning of this issue and I liked seeing who the Red Son Superman was. I did not like Helena’s action in the end even leading to her believed death. I liked seeing both sides of this story however I have a problem with the Huntresses final actions in this issue. Let us see how this ends.