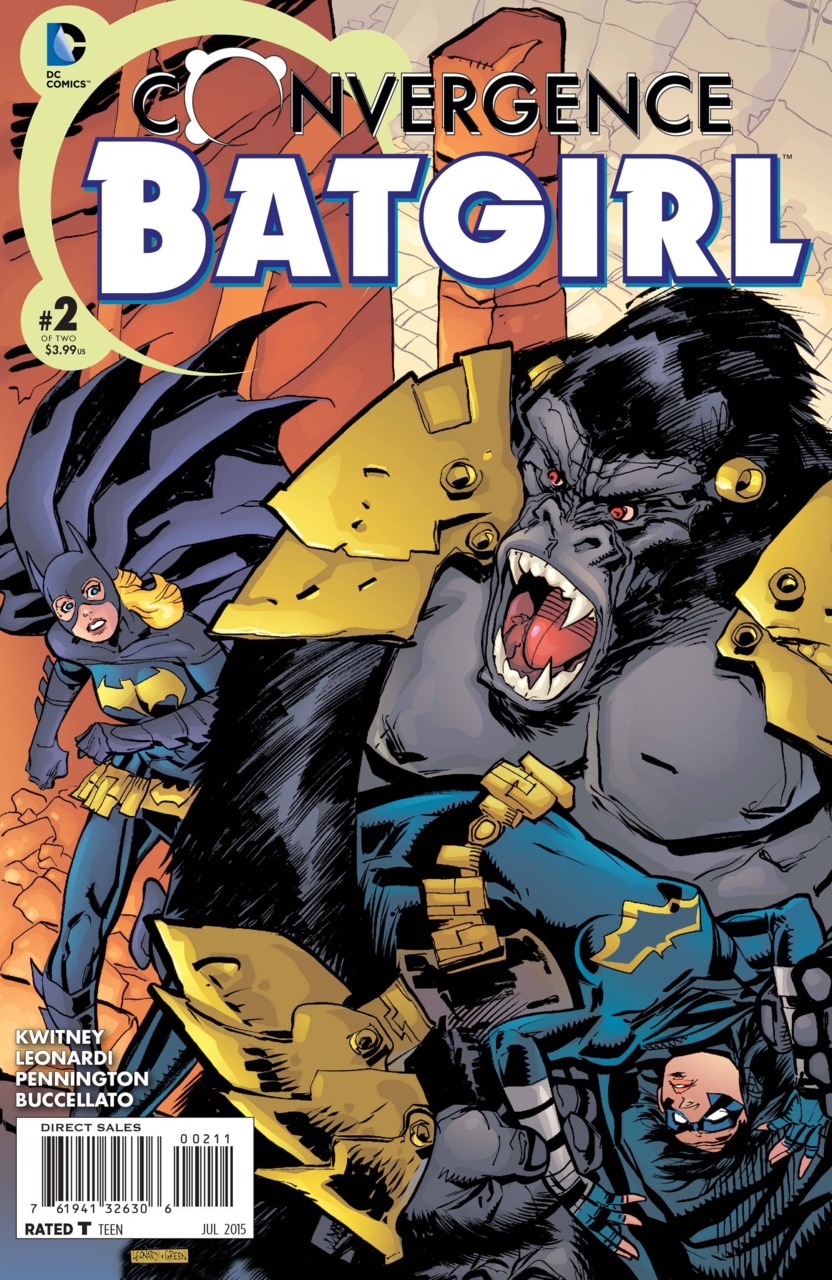 THE PLOT: Gorilla Grodd from an alternate universe attacks Batgirl, Black Bat and Red Robin, after being transported to a fight zone in the middle of a battle against Catman. Black Bat is knocked out and Red Robin is temporarily under Grodd’s control, leaving Stephanie and Catman to fend for themselves. Steph deduces that if Catman loses, the fight will end and everyone will go home, which happens. Cass wakes from her coma and Tim and Steph get back together. The End.

MY THOUGHTS: The uninspired scripting coupled with the blind characterization of the protagonists makes this issue pretty unlikeable. I wasn’t happy with part one, so by this point I was essentially reading through it so I could say I read it. I just wanted it to be over, with small hope reserved that it could turn itself around. It didn’t.

Most of the plots to the Convergence tie-ins ring fairly hollow, so their strengths and weaknesses fall squarely on the writers’ handling of the character. Dan Jurgens is a classic Superman writer, so I quite liked his take. Marv Wolfman created the New Teen Titans so of course he acquits himself well. Alisa Kwitney’s writing of the three main heroes in this story comes off as someone trying to stay afloat in the ocean without a lifesaver. She is flailing writing these people, and I don’t envy her. It isn’t her fault she’s not overly familiar with Stephanie Brown or Cassandra Cain, but it’s not like there’s writers working who aren’t. Why did he have to put up with someone who was shooting free-throws in the dark in trying to recapture the appeal of fan-favorite characters. What was DC thinking?

There’s just too much second guessing with Steph’s character. She’s been a member of the Bat-Family both officially and unofficially for years. She’s been trained by Batman and Oracle. She’s been through worse than this quite frankly. Her reticence at being a hero is just so off point it’s distracting. I can’t take it seriously for a second. The pathos is not even that heavy because Leonardi’s artwork is so bad the emotions can’t be properly registered from the facial expressions. The one time I felt it was when Stephanie thought Cassandra had died (at which point I was daring for DC to pull that trigger and see what would happen). Cassandra…this isn’t Cassandra. I almost bought the whole to-the-point, curt nature of her voice in this, but when she’s gagging at Tim and Stephanie getting together at the end, the book just loses it. Cassandra loves both Tim and Stephanie and at worst is just jealous she doesn’t have someone herself (or she’s jealous of Steph/Tim and wants the other one for herself, who knows!). Cass is straight up unlikeable in this comic, there’s nothing to her that captures the appeal which fans gravitate towards. Again, I’m not exactly asking them to bring in Kelley Puckett, Scott Snyder and Kyle Higgins had Cass’ character down pat in Gates of Gotham. Higgins should’ve written this book.

So Tim and Stephanie get back together at the end of this comic which…is a bit vexing. I guess it’s nice for what it is, but the continuity is muddy. Tim and Stephanie’s relationship has been complicated for years, like since she became Robin (which I liked that that was referenced). Around Batman R.I.P. he gets very frustrated with her and tells her to quit crime-fighting. He ignores her when he becomes Red Robin, so they never really got back together, especially when she became Batgirl. There was always romantic tension, so them getting back together here isn’t out of nowhere. It feels way too pat and ignores much of the things they had to work through. I don’t mind it all that much, but because it isn’t entirely earned it leaves very little effect on me. It’s worth noting that this is the first time Tim Drake has attempted to have sex with anyone, nearly putting to bed the whole virginity angle Fabian Nicieza was playing with during Red Robin. It doesn’t happen though.

This was lousy. I’m not horrified or as offended as last issue, but the value in seeing our favorite characters together again was deadened by the absence of their actual personalities. This is half-assed, lazy writing in its purest form.