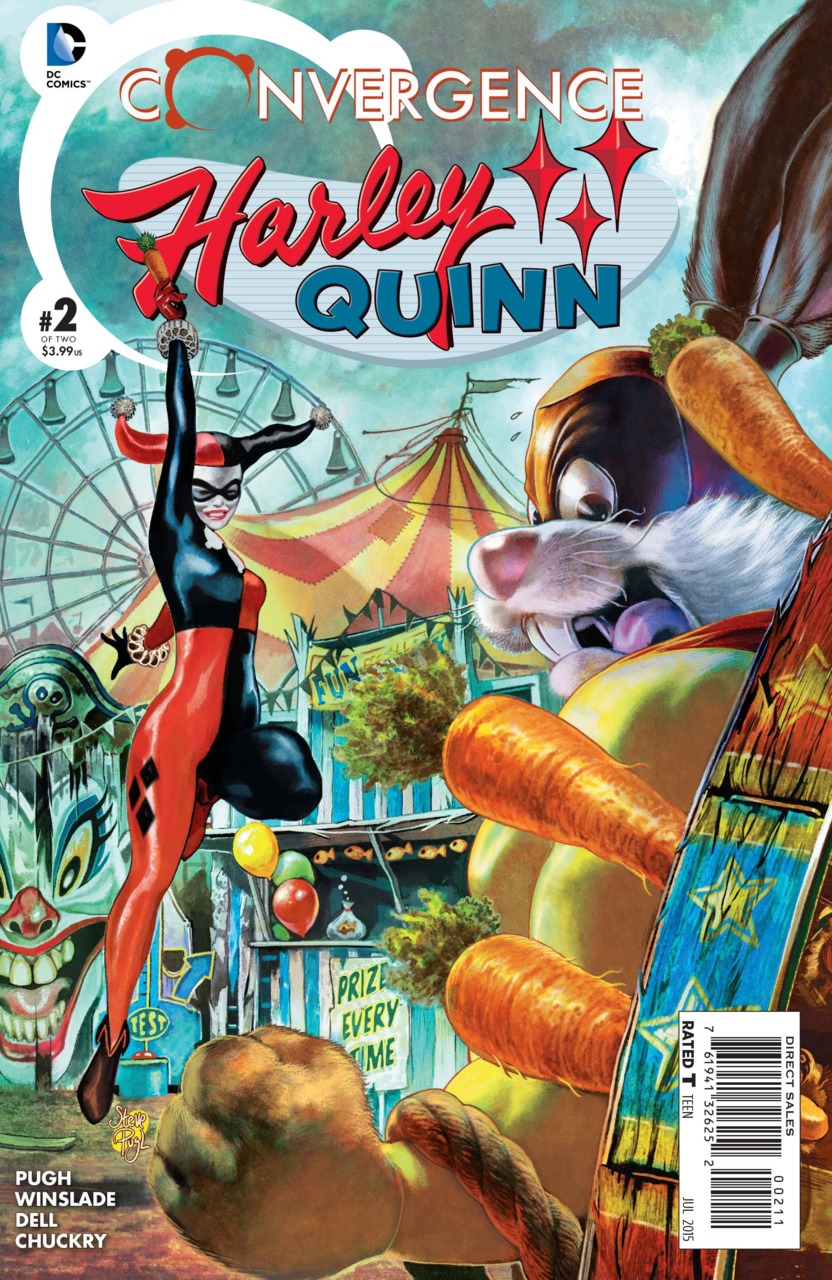 Previously on Convergence Harley Quinn: Harley is being sent to fight Captain Carrot for the survival of Gotham.

Part 2 opens open with Pig Iron being transported through the void to the carnival where Harley and Captain Carrot will do battle. He wants to warn Captain Carrot that his opponent isn’t a superhero but just plain old crazy Harley Quinn. Harley gets to Pig Iron first however and gives him a solid smack with her mallet.

Captain Carrot stumbles upon the site of the malletting and sees PI’s insignia on the ground along with what appears to be a puddle of Pig’s blood. On the wall Harley has written “Rabbit Season” with liquid taken from the puddle. Captain Carrot swears to avenge his friend.

Flash back one hour: We see Captain Carrot resigned to saving Earth 26 and its cartoon inhabitants. Harley finds Captain Carrot on the Carnival of Battle. CC says he doesn’t want to hurt her. Harley tells him that she will use super powers which we Harley fans know are clearly made up including Awesome-portation (teleportation with Extra Awesome) and a magic hammer stolen from the Viking gods. Harley disappears on a roller coaster tricking Captain Carrot into thinking she has used Awesome-portation.

Back in Gotham Catwoman and Ivy are waiting with Harley’s boyfriend Louie for the result of the battle. Louie is upset having seen Harley revert to her Superhero costume feeling scared of her in super mode.

Meanwhile on Earth 26 one of Captain Carrot’s pals, Alley-Kat Abra is trying to help CC by telepathically reaching out to the “City of the Five-Fingers” to find out about Harley. She overhears Louie and Ivy’s discussion and realizes that while Harley doesn’t have many superpowers she is insane. Alley declares that one of them needs to warn the Captain.

Back at the carnival Harley is throwing Captain Carrot around pretty well when she sees Pig Iron enter the arena. Harley sneaks up on Pig Iron and delivers the mallet smack we see at the beginning of the comic, knocking off his insignia.

Suddenly robots arrive on the scene and declare Pig Iron a non-combatant that needs to be ousted. Pig Iron smashes a robot before he is removed, (apparently) leaving a puddle of oil on the ground. It is the oil, not Pig’s blood that Harley uses to write on the wall. Captain Carrot, seeing PI’s insignia and thinking Harley has killed Pig Iron cries out in anguish.

Harley and Captain Carrot do battle on a roller coaster car that is running around the carnival. Harley tries to pull some phoney super power stunts on Captain but they all fail. The roller coaster begins to collapse and the two plunge down to the ground realizing that neither are particularly super powered. The two sit in the rubble of the roller coaster and Harley shares a carrot with the Captain. He says it is delicious and Harley says that was grown by Ivy. She also points out that while she doesn’t really have many super powers Ivy has given her immunity to poisons. Captain Carrot realizes that he has just eaten a poisoned carrot and we see the ruined carnival as the Captain meets his demise.

Back in Gotham after the event, Catwoman returns Harley’s goldfish to Louie. Harley had given Catwoman a note to deliver as well but she thought he isn’t ready for it. The three Sirens get in Ivy’s florist van. Harley, the savior of Gotham, returns to her childlike ways and is humored by the other two Sirens.

The main thing I look for in a Harley comic is how she is written and here she is wonderfully daffy. She has lots of cockiness, creative one liners, and when things go wrong she just says oops and makes the best of things. It also had a pretty entertaining battle. The standout thing this book has is that although I am a big Harley fan I also had a lot of sympathy for Captain Carrot. At one point I was hoping they would find a way for both to survive but it was not to be. Call me a softie but I was happy that Captain Carrot met his demise off-frame. Now I am thinking of going back and reading some of the Zoo Crew trades to learn more about Captain Carrot and his buddies. So from that point of view DC has a success here.

Although I’m going to give this comic a high rating it very easily could have been even better but for a few things.

First of all, the pig blood/robot oil gag wasn’t presented in a way that was easily understandable. We never see the robot leaking oil and because of the “One hour earlier” plot device I had to flip back and forth between the pages to put together the plot. If they just tweaked a frame to show the robot leaking oil it would have solved the problem. I don’t mind doing a little brainwork but it interrupted the flow of the story.

The other issue I have is that I am not 100% clear on the situation with the poisoned carrot. I assume that Harley tricked Captain Carrot into eating it knowing it was poisoned. At least I think so. Did she know the carrot was poisoned or was it just something Ivy set up? The last thing Harley says to Captain Carrot is “Hey, what’s up? You look terrible!” which makes me wonder. Is she being kooky? Snarky? Forgetful? Or is she oblivious to the trap? It isn’t clear to me.

The one thing I’m a stickler for is clear storytelling. So, while I would love to give this comic 4.5 or even 5 Batarangs for the terrific portrayal of Harley and creating pathos for Captain Carrot, because of the plot confusion I am only going to give it 4. So close.

Also in this comic is a preview for the upcoming Section Eight series. I think it was a smart idea to include it with Harley Quinn as both have the same zany characters and dialogue. There wasn’t really much of a story to relate, it was mostly just an introduction to the ‘heroes’. I look forward to trying out the new book.