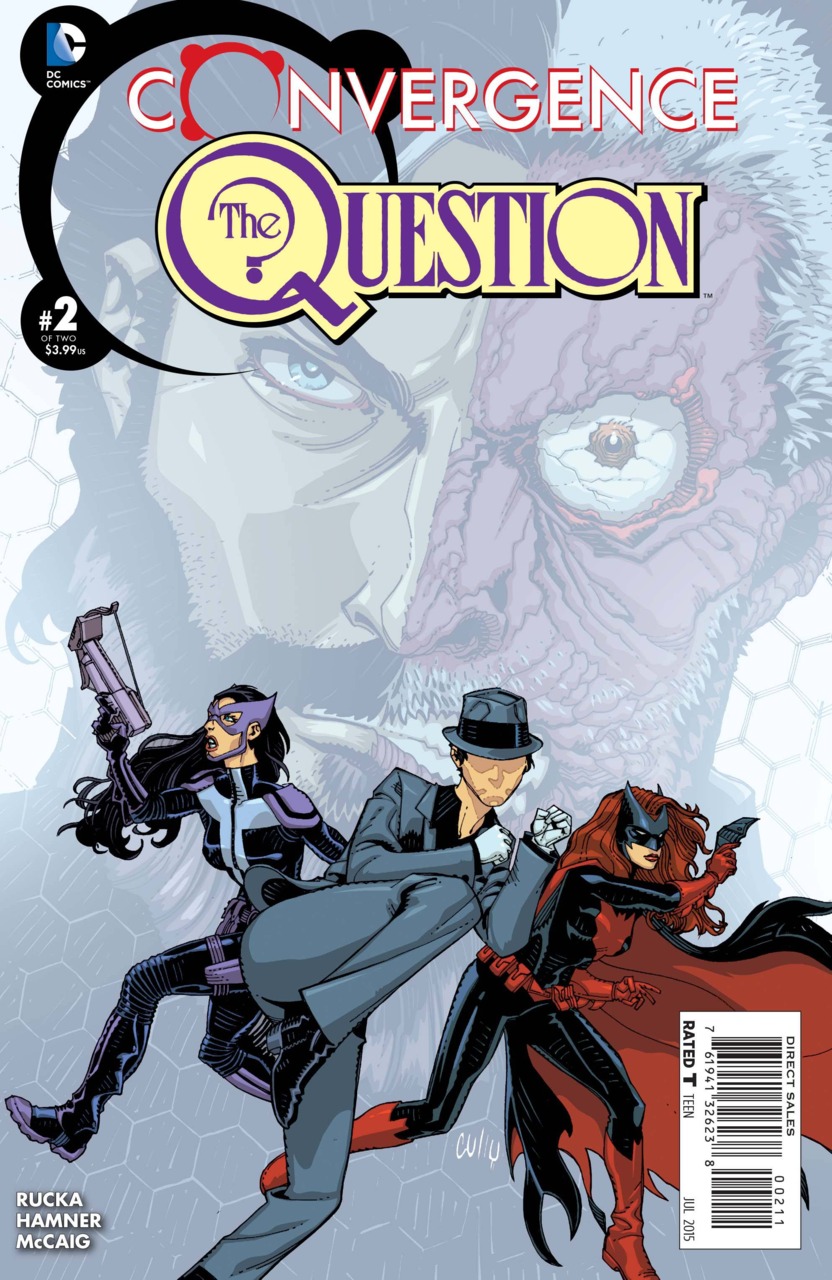 “Just One More Thing… Part II” opens at the hospital bed of Hernando Montoya. His wife and son are there and he asks where his daughter, Renee is.

We cut to Batwoman, the Huntress and Question searching for Harvey Dent/Two Face. Huntress is still attending to Question’s head wound she sustained at the end of the last issue. We start with the tiring jealous mutterings of Batwoman asking if they are “finished being sweet on each other”, they have a “lunatic to track”. Question just replies that they do not need to track him; they just have to get to where he is going ahead of him. Huntress and Batwoman have no idea where she is going.

At a parking garage, we see the back of a man holding a gun approaching. Inside we see several men talking about the tournament and fighting, presumably referring to Telos’s announcement which is interesting because the opening scene in the hospital, we hear Hernando’s wife tell Hernando that the dome is gone and no one knows why. These men seem to know why. The gang is identified as D-Cell and one of the muscles approaches a man wearing orange. We hear a gunshot and see the thug shot in the knee. The man is Two Face. Two Face is not there for revenge; he is there to recruit the gangs help and arms them.

We find Question, Batwoman, and Huntress on the roof of a building overlooking the Gotham City Courthouse. Question wants to go in with Batwoman and Huntress covering her back. The three end up arguing over what to do about Two Face. Batwoman sees him as a serial killer who needs to be put down while the Question looks at him as a sick man who wants to commit suicide. Huntress takes Batwoman’s side in stating that they do not know anything about this second Harvey Dent/Two Face could be looking to kill an innocent man. Question ends the discussion with either help or not, she is not going to let Two Face die.

Inside the courthouse we see Two Face confronting a man who just says that Two Face must be him.

The three women move in and start taking out Two Face’s new gang, the D-Cells. While Batwoman and Huntress argue over who is sleeping with whom where it is revealed that Renee and Huntress are just roommates to the embarrassment of Batwoman, Question ditches them and finds Two Face. Two Face wants to give the other Harvey his gun so Harvey can kill Two Face and end this contest. Harvey takes the gun and aims it at Two Face. We see Question running with Batwoman and Huntress far behind her. Question runs in front of Two Face and takes the shot as Harvey fires. Batwoman yells to Renee revealing her identity. Harvey falls into a portal of some kind yelling that he did not mean to shoot Question. Batwoman rushes to try to remove Question’s mask. Huntress reveals that there is a button on her belt which releases a gas to remove the mask. Batwoman removes the Question’s mask as Two Face asks why Renee would do what she just did. Huntress replies that she thinks he is worth saving and that she cannot save her own father. Batwoman starts mouth to mouth and Renee opens her eyes and kisses Batwoman. It is revealed that the suit Renee is wearing is made out of kevlar. Two Face asks what he should do now which Renee just responds by saying that he should be the good man and the three women leave as Two Face stares at his coin on the floor.

Throughout this issue we get Renee’s narration. This narration culminates with the reveal from “Gotham Central” that when she came out as a lesbian, her father disowned her and asked her to never come back. This was never resolved in the run of “Gotham Central”. Here Renee enters Hernando’s hospital room. She approached him asking “Papa”. She says that he can go in peace and not have to hurt anymore. All Hernando says is that Renee is his perfect little girl and that he loves her. It is implied that he dies. Renee leaves the room where Helena and Kate are waiting in civilian attire. We see Renee pick up the Question’s hat and put it on.

I liked this issue better than the first issue. We had a direction that I did not see in the first issue. We continued with the character development of Two Face and Renee. We find Renee’s motivation for helping Two Face. She is guilty about the separation with her father and if she cannot help him, she can help Two Face.

I did find Batwoman’s jealousy over the Huntress tiring and I was satisfied that it ended quickly in the courthouse.

Overall I enjoyed the art of this book however I did not like how the “u” in courthouse looked like a “v” This was consistent everywhere in this building. I do not know why this is and it was a little distracting in reading the book.

The solicit identified Harvey Dent as from the Flashpoint universe. There is no indication in the issue that this is the case. But I admit that this is a nitpick.

The “u” and the Batwoman jealousy dropped my enjoyment of this issue but overall a very solid issue to conclude this two parter.