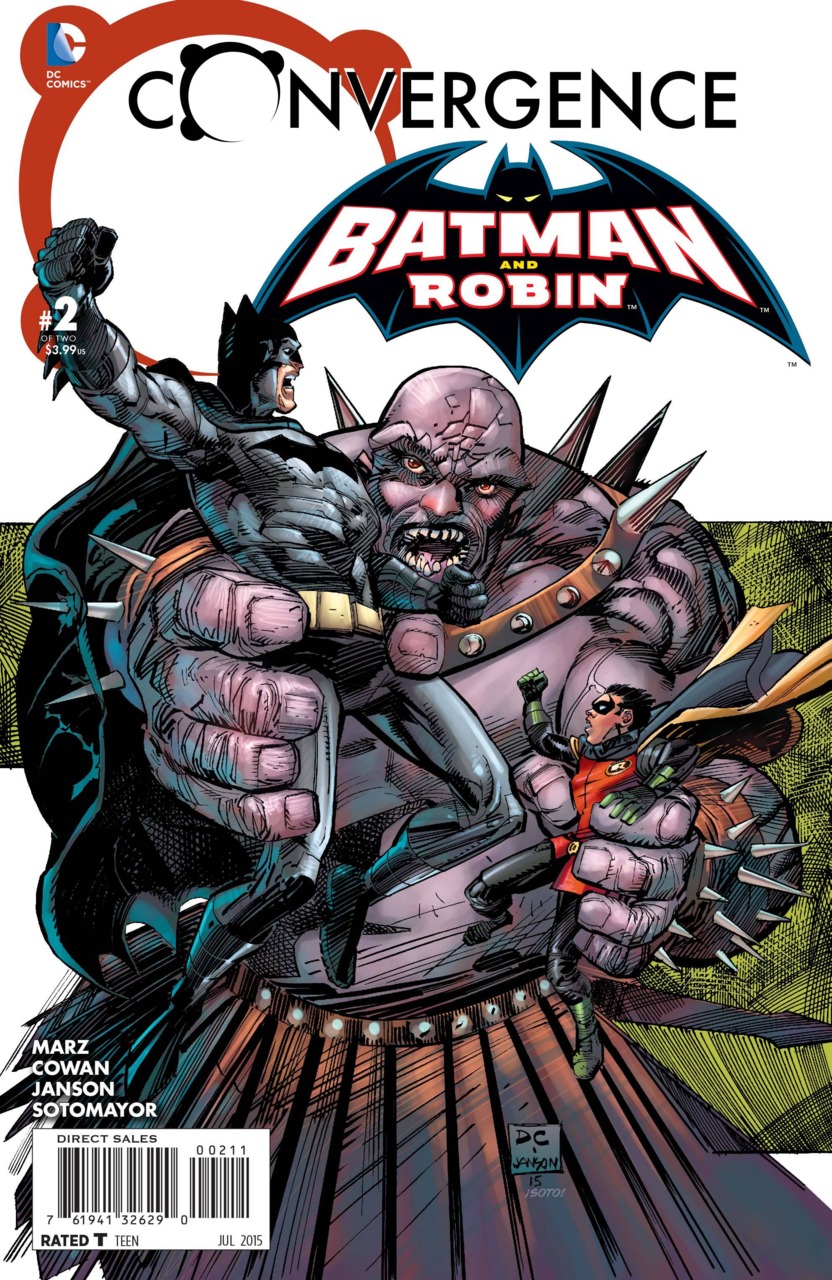 As Batman, Robin, Red Hood and Scarlet stand upon a Gotham rooftop, Batman states that they shouldn’t be fighting just because Telos says so. However, the point quickly becomes moot as they are overwhelmed by creepy doll people. As the Extremists watch from another rooftop, Death Angel comments that Carny’s toys won’t be enough to take down their opponents…she comments that they should unleash Brute and Meanstreak. As Robin and Red Hood banter back and forth, Batman attempts to get them to concentrate on fighting the dolls…however he is sidetracked enough for Brute to enter the fray and send the Dark Knight flying.

As the remaining Extremists jump into the melee, Batman and his allies meet them and the battle continues anew. The fight turns bad quite quickly, and each of the heroes seems to be losing against their respective Extremist villain. As Brute attempts to severely wound Batman (in homage to Bane breaking the Bat), Red Hood and Robin rush to the aid of their mentor. Knocking the giant out, Batman comments that they still have work to do…but this time, together. Rushing back into the fight, Batman takes on Carny as Damian quickly attacks Death Angel…meanwhile Jason takes on Meanstreak and is assisted briefly by Robin. With the villains down, Robin and Red Hood believe they have won…however Brute seems to have revived and quickly ensnares the two heroes.

A brief earthquake quickly rocks the city, and sends Brute over the edge…still holding Jason and Damian. As Robin jumps to safety, he reaches out and saves the tumbling Red Hood…however this sends himself over the edge, but the two are saved by Batman. As Jason and Damian resolve their differences with each and apologize for their actions, Scarlet can be seen tying up the Extremists.

As the issue closes, Batman and the others wonder might come next from the mysterious Telos and Batman states that he will need both Damian and Jason at his side. Batman then apologizes to his son for truly not knowing have to be a proper father and tells him he loves him. Damian shares the sentiment, and the three stand upon the roof and Batman notes that they will continue to protect the things that they care about the most.

A little while later, Superman arrives and talks to Batman who is standing atop a gargoyle. Clark comments that Damian and Jason seem to be enjoying themselves despite their differences…and Bruce states that although they aren’t brothers, they are both his sons. Superman and Batman then have a quick discussion about whether they would have been different if raised by their respective fathers…but Clark counters that he had a father, and apologizes that Bruce’s story was radically different from his. As Superman tells Batman to go be with his family, the two wish each other luck in the future as Batman swings off into the night…shortly accompanied by Red Hood and Robin.

Well there isn’t much to talk about in this issue. Overall this story was okay. Unlike some of the other “Convergence” stories; this one didn’t focus too much on the Extremist characters…something that I would have liked to have learned a bit more on. Although we got to see each of the characters and what some of their powers were…their characters seemed pretty weak and generic.

I also didn’t see a point for Scarlet to be in this story. She was portrayed as a competent fighter and ally to Red Hood in the original Grant Morrison run, but here she just seems to be in the background and doesn’t participate in the final battle at the end. She is even missing in the final panels when the trio of Batman, Robin and Red Hood are talking about Telos and swinging off into the night…so why was she there?

There were also a few awkward moments between Jason and Damian…I mean, I get we need to establish that the two don’t like each other, but do we have to continue this during the fight sequence? I also found it extremely weird for Superman to show up randomly at the end of the story…shouldn’t he be busy searching for his pregnant wife and battling against the “Flashpoint” Batman? (See “Convergence: Superman” for that story). I do understand the point of the conversation, comparing the two orphans who grew up without fathers…and how Batman considers his Robins as his sons, but I felt that this wasn’t needed at the end of the story.

I did like Red Hood’s dialogue, especially when Batman asks him if he’s okay and he comments that he’s been through worse. It was also nice to see the “I love you” exchange between Bruce and Damian…something I don’t know if we have ever seen before.

Overall this issue was a slight let down from the setup of the previous one. I had really hoped to get some more character development from the Extremists and even the fight sequence was good at best.