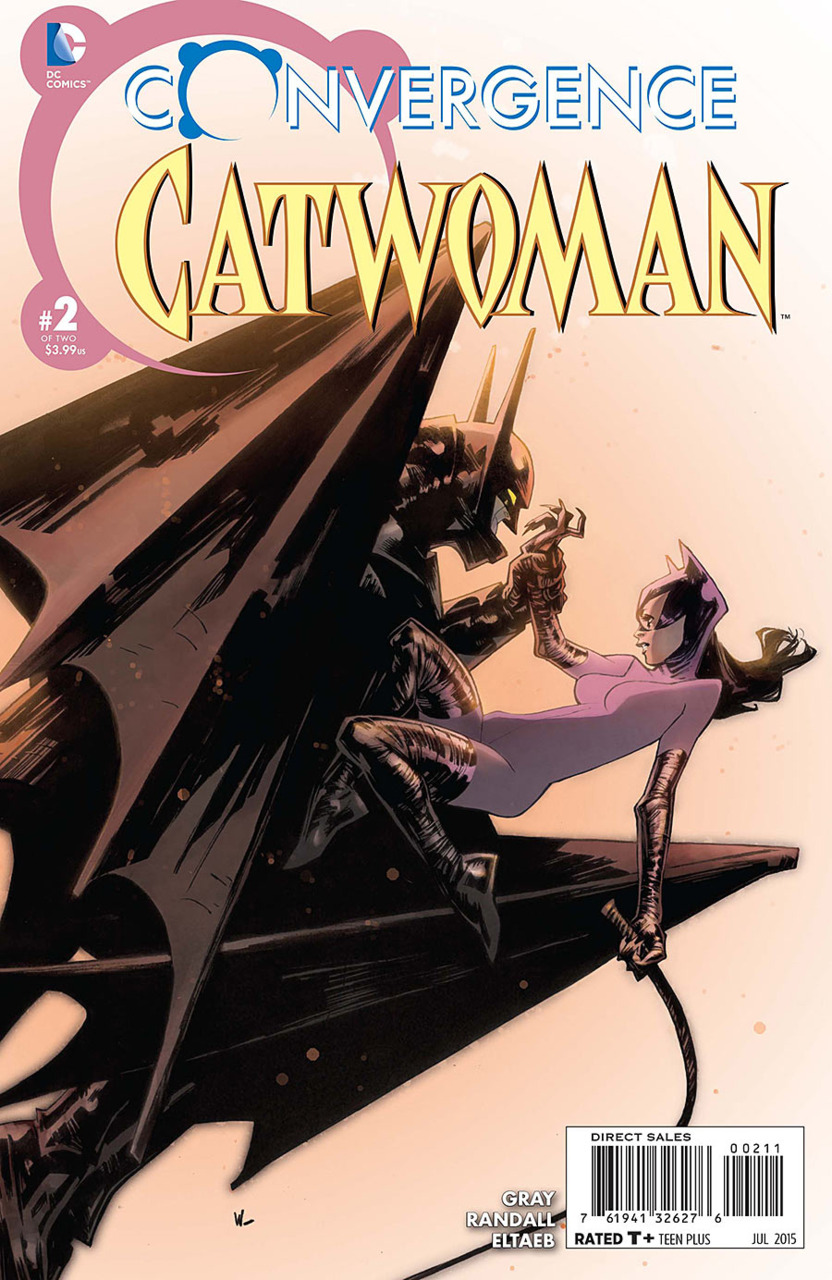 After being introduced to Kingdom Come Batman in Convergence: Catwoman #1, Catwoman is surprised at the differences in the Batman she has to fight.

Batman has some issues of his own. The tech that his computerized Batsuit of armor depends on doesn’t exist here which puts him at a disadvantage.

Mannheim’s men show up on the scene and begin shooting at Batman while Catwoman makes a hasty retreat with Sally. Batman deals with Mannheim’s men and comes for Catwoman. As he approaches her she hits him with an electrical grenade and he crashes to the ground with a frozen Batsuit computer. Catwoman joins him. To bide his time for a computer reboot, Batman engages in some chit-chat with Catwoman who is flirting with him like she would in her world.

Just before the Batsuit reboots, Mannheim and his men arrive ready for battle. Catwoman becomes protective of Batman even though she must beat him to save her world. The gang shoots and Batman protects them both with his cape. Once the barrage stops the Bat and the Cat attack Mannheim’s goons. They do a good job on them but cannot defeat Mannheim himself who has on an Apokolips suit which makes him invulnerable. Mannheim tosses around Catwoman and starts to hammer on Batman. Suddenly Catwoman exploits a design flaw in the suit: an exposed power supply. She destroys the suit’s power which allows the two to beat Mannheim up.

However, the citizens of Metropolis have gathered to kill Kingdom Come Batman so that their city will be spared. Catwoman tries to talk them out of it when an earthquake begins and someone shoots at Batman. Catwoman leaps in front of the bullet, saving Batman. She dies in his arms and he promises her he will try to find a way to save both cities.

This story has a much better narrative structure than the previous version. I like that Catwoman tries to banter with Kingdom Come Batman as she would her Batman. While it is a different version of the Bat it is still the same man and Batman begins to respond to her.

The reboot of Batsuit computer was a little hokey (51% progress….83% progress etc.) and made me want to scream at Catwoman to start fighting not flirting. However, the resolution was that Batman had to fight Mannheim’s men not Catwoman so there was a little twist I appreciated.

I agree with Catwoman as I am a surprised that the Apokolips suit had such an obvious design flaw. Seems like it was kind of a convenient way to get rid of Mannheim. Also, I’m not exactly sure what either of them were thinking by teaming up since both of their cities would be destroyed. Also, what was Kingdom Come Batman thinking when he said he would try to save both cities to a dying Catwoman? Seems out of character for any Batman to make impossible promises like that. I assume he wasn’t able to save the cities but I think that is the last we are going to hear of that promise.

What was very interesting to me was that Catwoman sacrificed herself and her world to save a Batman that wasn’t even hers. I think she jumped in front of that bullet automatically and without thinking of the consequences which exposes her character in a way that I think is very touching. And Kingdom Come Batman responds to her sacrifice and sees in her the beauty that her Batman sees.

So, while this is a big improvement over Convergence: Catwoman #1 and there are some excellent dramatic moments I think the plot holes keep this from being a great read.