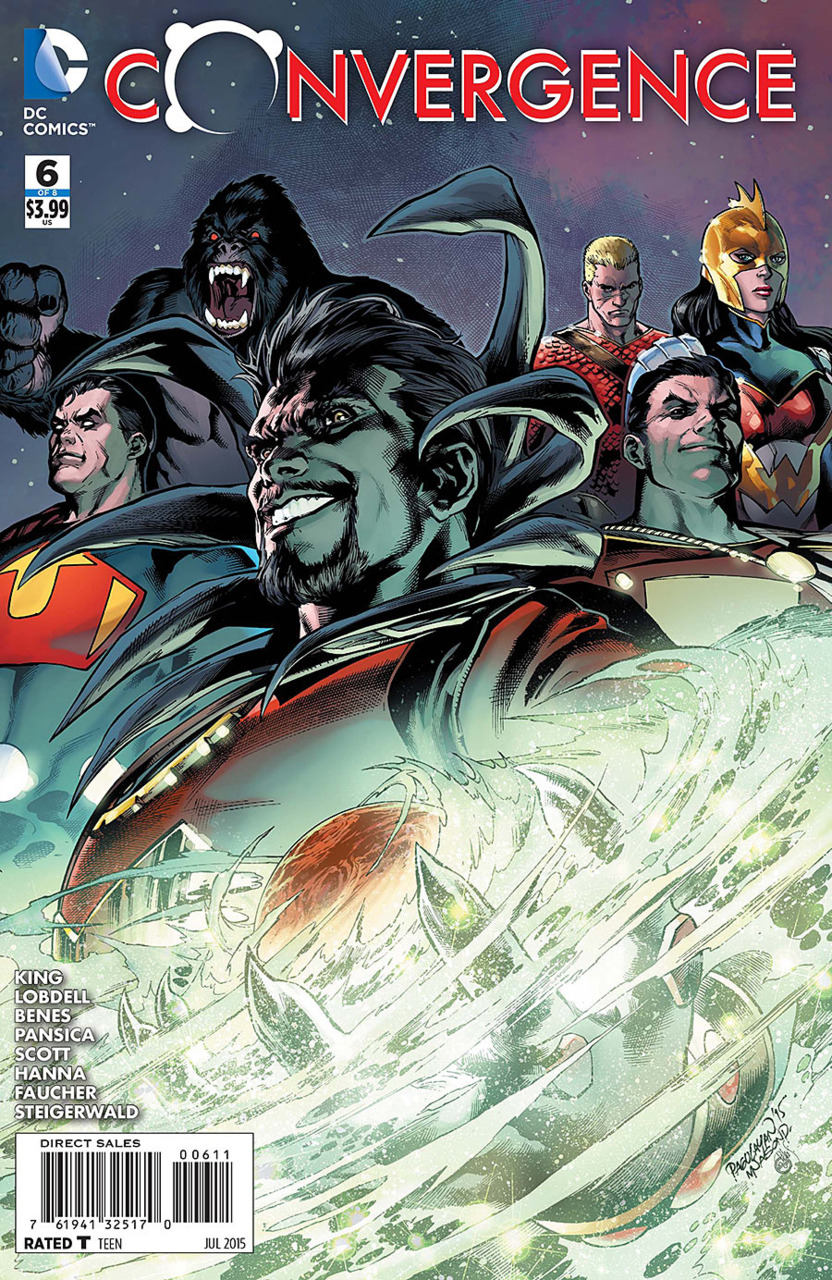 We are finally getting somewhere in this issue of Convergence. Even if that destination is a bit murky at best. We open up in the New-52 Universe and they begin to detect the Bloodmoon entering their universe. What is clear however is this is most definitely before Future’s End so it really leaves us with the thought of what the point of that weekly story even was other than to kill Terry McGinness and make Tim Drake Batman Beyond.

As the the New-52 heroes stand by for whatever happens next as this planet forces it’s way into the universe we get cameos from Nix Utoan who is trying to figure out how this planet exists outside of his multiverse as well as one of Darkseid paying no matter to the happening and declaring it is time for war.

Meanwhile back on the Bloodmoon, Deimos continues to bargain with the many heroes and villains within the taken cities to either worship him or die. He has given them one hour to decide or they will all die. Yolanda, Avatar of the Red of Earth 2 is still his captive and he for some reason continues to call her Wildcat meaning Deimos has peered into her timeline through the power of the Time Masters and has seen that that is the hero she will become assuming she makes it out of this book alive and into Earth 2: Society. Deimos then explains to her that his plan has never been to rule the Brainiac’s captives but to slaughter them all taking even magic with him upon their deaths in order to remake the universe in his own image. Wow. That is even an insult to convolution.

Outside Brainiac’s sanctum pandemonium reigns and in borrowing a little lyrical style from the band “Blur” heroes who like heroes who fight villains who like villains who fight heroes because their villains always should at least make some sense. All kidding aside an Arsenal realizes a pattern of all the people showing up as Superman meets Superman and Flash meets Flash. Post-Crisis Superman rallies the troops together in a moment that should make anyone who is a fan of the pre-flashpoint universe punch the air. (And if you haven’t already PLEASE read Convergence: Superman. It is PRISTINE. 5 out 0f 5 batarangs!)

As the troops disperse on Superman’s command to find anyone who they think will be on their side to take on Deimos, Superman remarks to E-2 Dick Grayson that Telos and he may be the key to stopping this madness as he had heard their conversations in issue #4. Dick Grayson finally catches up to Telos and convinces him to help our heroes and that the fact that they have all been cast aside will not be in vein.

Superman has amassed the biggest army of heroes since Crisis On Infinite Earths in the battle against the Anti-Monitor to take on Deimos. The only think that stands in their way are all the villains (and Kingdom Come Superman and Wonder Woman bafflingly) on Deimos’s side.

Telos orders his troops to kill Superman’s army and there the issue ends.

Finally everything is starting to pay off. But man this has been a hard road traveled. I get the idea of what they were trying to do here. I really do. But I have to be honest. This mega crossover event has been a mess. The tie-ins have been hit and miss. The continuity within someone of them have been so off. And this main series had all the potential in the world but Jeff King who as far as I can tell had never written a comic book in his life before this, but comes from the TV world, got lucky and decided to write his favorite villain that no one but those steeped in DC lore have ever even heard about.

This issue was a MILE above the previous one so I will give credit where credit is due to it in giving it a higher rating than the last issue. But so far Convergence has been nothing short of taking all of your favorite heroes from every single era, putting them in an oil drum, and lighting a match. Sure it looks pretty, and it might keep you warm for a short time BUT S**T BE BURNING YO!