Review: Convergence: Batman and the Outsiders #2 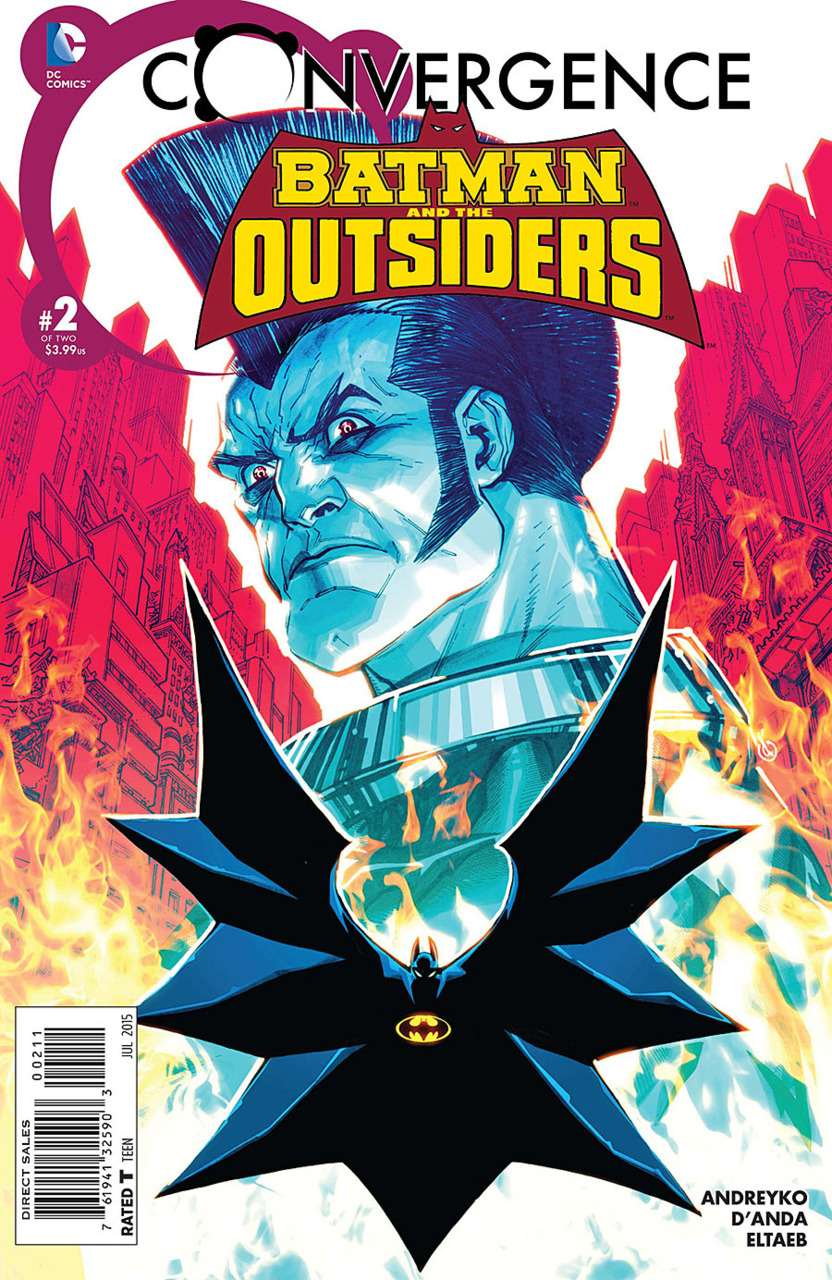 This issue opens deep inside the mind of Buddy Blank as he is being tormented by a being known as Godmother. To some, Buddy Blank is the host of OMAC which is controlled by Brother EYE…however Godmother informs Blank that EYE has abandoned him and is gone, and she is his mistress now. Back in the present, Geo-Force engages several of the strange creatures that now invading Gotham City. Meanwhile, across the city, the remaining members of the Outsiders come to grips with their situation…namely those are now once again brimming with their super powers. Batman is also on top of the situation and calls each of them back into action.

As OMAC continues to hurl police cars, the Outsiders enter the fray as Batman rescues several police officers from a hurled car. Meanwhile, Godmother continues to force OMAC to do her bidding…however, internally we can see that Buddy Blank is attempting to throw off her control. The Outsiders continue to fight against the strange aliens and OMAC, as well as getting nearby people to safety. At one point, Blank seems to regain control as Batman attempts to strap some type of collar on him…however he is quickly thrown off, but Black Lighting and Halo quickly swoop in and blast OMAC with their powers. This seems to disrupt some of the control that Godmother has over OMAC, and she ends up pushing a giant red button (which is never good).

However, we never get to see what comes of this action as each of the Outsiders combine their abilities to take down their foe: Geo-Force opens up the Earth which spews liquid hot magma onto OMAC, then Metamorpho turns into liquid nitrogen which quickly hardens the molten rock. Finally a combined blast from Halo, Black Lighting and Geo-Force sends OMAC flying.

A voice rings out declaring the Outsiders as victorious and Godmother seems furious. We then see glimpses of Buddy Blank talking to a returned Brother EYE who declares that their time is at an end…as well as a truly depressed Metamorpho. The issue ends with Batman and his Outsiders assembled around him as they talk about what is to come and how it can’t be good.

I have to say another solid issue from the team of Marc Andreyko and Carlos D’Anda. This was truly, for me, one of the better “Convergence” tie-ins as it helped to showcase some characters that I wasn’t too familiar with and portrayed them in an interesting and engaging manner.

I liked that we opened and got a bit (and I mean super, tiny bit) of back story in regards to OMAC…although it was short, I understand how the character functioned and that he was being manipulated by a villain. I also really enjoyed the fight sequence, even though it took up most of the issue, I liked that each character’s abilities were showcased…however I wasn’t a fan of how Katana was overlooked for most of the fight, each of the other characters seemed to contribute to OMAC’s loss in some way or another.

Overall this was a pretty decent issue, it showed off some characters that I am now a little more interested in…and I would be curious to know if their portrayals were accurate. Although I am not too familiar with the original “Batman and the Outsiders” run, this story has piqued an interest and I may be going back to see what this team accomplished during its run. This was definitely one of the better tie-ins that I have read and would definitely recommend to any Batman fan.