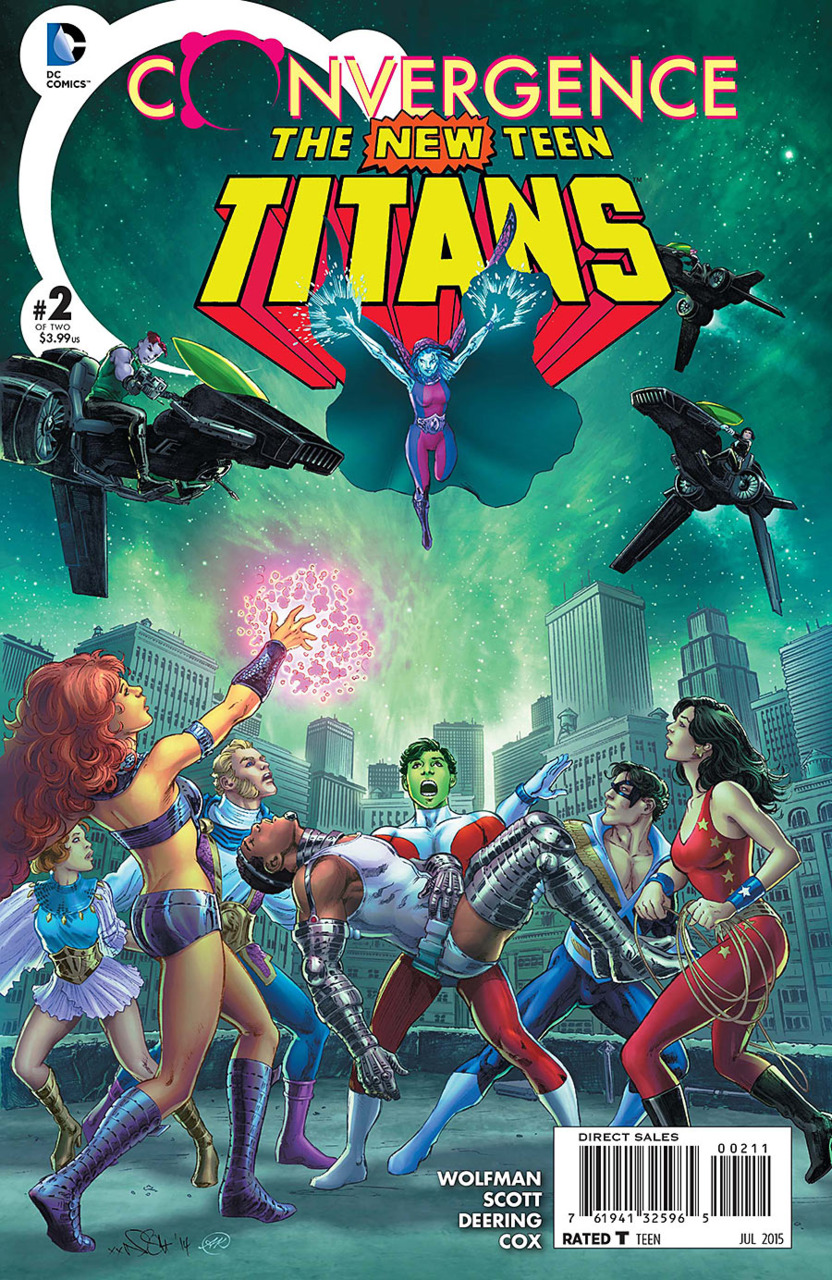 “Game of Heroes” opens with Firehawk and Nightwing meeting face to face after Firehawk’s call to Nightwing at the end of the last issue. They are discussing their situation and what they can do to benefit each other’s cities. Both introduce one another and discuss their back stories.

While this meeting is going on the rest of the Tangent Doom Patrol appears on an unknown rooftop. It is not clear where they are or if they are close to the Titans or Nightwing and Firehawk.

Firehawk gets specific about the Patrol’s plan to take Cyborg because of his power cells. While this conversation is going on it is becoming apparent that the Patrol are stalking and preparing to attack the Titans. The Doom Patrol crashes into Cyborg’s room firing on the Titans. The Titans counterattack but the target is clearly Cyborg. Gar and Joey are hit by Rampage’s blast, knocking them both unconsious. Doomsday of the Patrol orders Rampage to get Cyborg while Star Sapphire lays down cover to prevent the rest of the Titans from attacking.

Nightwing gets a call from the Titans detailing the attack. He immediately accuses Firehawk of distracting him while her team attacks the Titans. Firehawk claims to have no knowledge of the Patrol’s attack. Nightwing leaves to help the Titans, leaving Firehawk.

While the battle continues outside Joey awakes with Kole over him. She kisses him saying that she loves him.

Starfire stands over a fallen Deidre Dey, “Doomsday” of the Patrol only to be blasted by Deidre in the stomach allowing her to escape with Star Sapphire saying that Kory should have killed her. Donna runs into the room and Dick arrives as Kory states that she should have killed Deidre, if she had, Cyborg would not have been taken. The rest of the Titans also regain consciousness.

Kory tries to talk to Dick as he is formulating a plan. She held back and she wants to know why Dick will not let her do what she feels she has to do. Dick responds with “Two wrongs don’t make a right.” Kory counters with “Nice guys finish last.” Kory says that different rules apply and Dick’s rules are not working. Donna calls to Kory as she leaves. She wants to hear Kory out, listen to her. As the women talk in the air, Gar approaches Dick asking what they are going to do about Vic. Gar is concerned because with the death of his parents and stepmother he views Vic as his brother. He does not want to lose him also. Dick vows that they will not lose him.

Back at the Patrol’s base Firehawk arrives asking why the Patrol attacked, they could have worked with the Titans. Deidre does not want to hear it; she will not trust the future of their earth to children. Her only priority is the Tangent universe’s Earth and nothing else.

Kole walks in as Joey is painting a portrait of a tree. She wants to talk about her kiss. She hugs him as Joey cries. She wants to accept him as the artist he is and not the relative of warriors and fighters, meaning Deathstroke, since Joey is Deathstroke’s son. Outside of the room the other Titans are seen huddling. Nightwing walks away as Donna follows him asking if he needs help working up a plan. Dick is not confident he can make this right, Donna encourages him.

Kory approaches Dick wanting to talk. She knows Dick loves her but she is not sure that he respects her. Gar barges in; he picked up Vic’s promethium bandwidth. Dick immediately knows that they can track the radiation residue and find Vic’s location. The Titans move out in full force. They immediately engage the Doom Patrol while Gar sneaks in to find Cyborg. He does and frees Cyborg but Cyborg needs to do something before they leave the Patrol’s ship.

Deidre fires on Kory’s back as she is battling Star Sapphire. Dick jumps in the way of Deidre’s blast taking the hit in front of Kory. Deidre moves in for the kill facing off with Starfire who she says could not kill her before and will not do so now. Kory wants to but instead she punches Deidre in the face saying that she will not become Deidre. Dick wakes up and kisses Kory. This leaves a standoff between the Doom Patrol and the Teen Titans.

Cyborg has prepared the Doom Patrol’s lab to explode in 60 seconds. He will stop the countdown if everyone listens to him. Both teams are good and want to save their respective worlds. They have to find a way to work together and save everyone. Firehawk urges her mother, Deidre to listen. She extends her hand to Dick prompting Cyborg to stop the timer. An earthquake begins stopping the conversation.

When the earthquake ends the Doom Patrol is gone. Joey points to the sky where they see only one star. They think they are back on Earth but Donna is not so sure. She feels that something is wrong. Dick is not so worried; the Teen Titans are together with the people they love. We close with Dick holding Kory’s hand.

On the first reading I did not like this issue. It seemed to be jumpy and I just could not follow the action well.

On my second reading I have changed my mind. I liked the action scenes, the first showed the Doom Patrol’s attack on the Titans while the second was a satisfying counter attack of the Patrol by the Titans. In between I liked the character moments. I particularly liked that Kole and Joey were able to talk over their love for one another, even though Joey never says anything. I liked Gar confessing his concern for his brother Vic to Dick even though Dick was expecting Gar to verbally attack him after his argument with Kory. I liked Donna’s efforts to hold the team together by taking a neutral stance in the strife and not by playing one side over the other. She acted like a sister should to Kory and Dick.