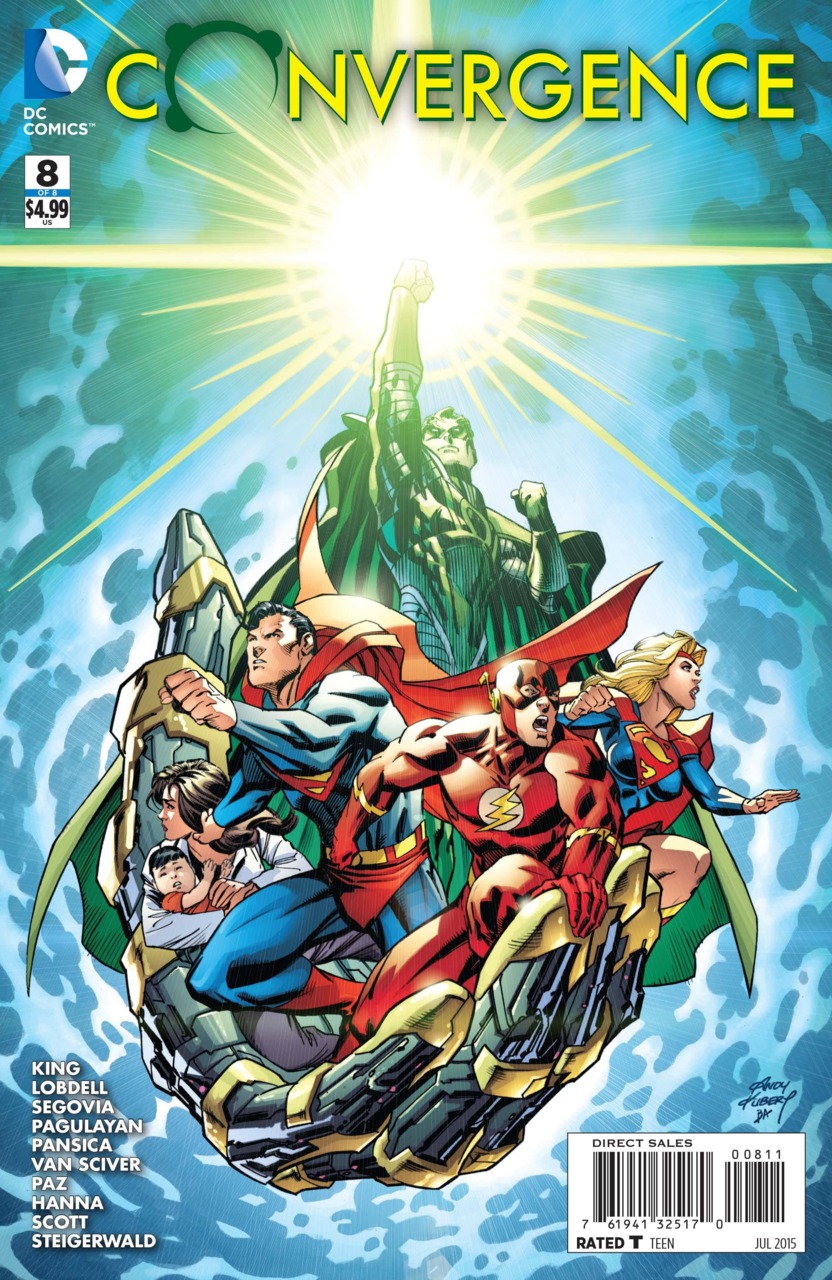 (Writer’s Note: I decided to  review these issues together simply because not enough happened in issue #7 to really say much in my almost Kerouacian writing style. With that said lets get to the review.)

It is PANDEMONIUM in issue #7 as characters on the Blood Moon are at war with all heroes on one side and mostly villains on the other with the as the New 52 heroes watch as the planet continues it’s journey into the main DC. The entity known as the “Great Oracle” first seen in Superman #0, #16-17 and last seen in Earth 2: World’s End is also watching on as the Convergence begins to end in earnest. On the World of Telos we get an awesome spread page where Pre-Crisis Batman decks Pre-Crisis Owlman and Pre-Crisis Superman takes down Kingdom Come Superman. In the end it all comes down Deimos and what I must say is the most badass moment that the Parallax Hal Jordan stands up to Deimos as tells him that he has officially annoyed him and he is done being trapped here and Deimos tells the heroes that his plan has always been for all of them to die upon the Telos.

The Planet Incarnate then stops the fighting between both sides and demands that Deimos tells him his true name. Before he is able to do so however character true to form Hal Jordan, recklessly murders Deimos. Telos then explains to them that the power that Deimos had was essential to saving them all and that it has now been released into the universe. As we end the issue time itself is now breaking apart as the Great Oracle declares everyone’s pasts’, presents’ and futures’ are in danger.

As we begin issue #8, everyone is again gathered. Parallax Hal Jordan tries to take over the situation but quickly Telos stops him from creating another “Zero Hour” style event. As an awesome scene between both new and old Jay Garrick happens where they mention that they feel the world’s vibrational frequency is accelerating Booster Gold and the newly reborn WAVERIDER, yes, take a second to let that sit in, WAVERIDER come in on the scene and deem that the only way they can save the multiverse is to release Brainiac from the prison he was put in during Future’s End.

In a complete swerve Brainiac begs the heroes not to attack them because he would just destroy all of them anyways and actually tells them he will help. This form of Brainiac then gives his backstory and how he came about finding out about the Multiverse and how he himself wanted the power to evolve like that of the monitors and the anti-monitor but in his quest he was caught in the storms caused by the previous crisis’ between COIE, INFINITE CRISIS, ETC ETC. With all he went through his body has suffered and he now asks the heroes for their help in preventing the original Crisis on Infinite Earths from ever happening.

Of course all of the heroes are ready and willing to help. And of course this is where things get weird. Since the beginning of the New 52 we have been told several contradicting things on whether the previous Crisis events have happened. Some have said yes just not the way we remember. Some have said no they have never happened. This would seem to show me that yes they did indeed happen but not the way we remember detail by detail as we still have the Flash doing his Death Run in COIE as well as Pre-Crisis Superman and Pre-Crisis Supergirl heading back toward their fates in COIE.

The issue ends with the Earth 2 heroes still on the Blood Moon and they are informed by Telos that they can use this planet to rebuild Earth 2 with survivors of their old Earth and that the planet has actually been relocated in space and time to the location of their original earth. There then some beautiful spreadsheet style pages of the different earths showing for example the pre-crisis earth in the background with the New 52 heroes in front as well as similarly with the Earth 2 gang and many of the other Earths from Multiversity.

Now what we have to remember is that DC operates on a Pre-destination paradox. Which means a lot of the time things are only created the way they are because a person from the future goes back to the past and has a hand in creating the furture they had before time traveling in the first place. We saw how that worked in The Return Of Bruce Wayne.

Now, I have done my best to try to make sense of everything and I am going to present the following theory:

From higher beings such as Metron, Darkseid, The New Gods, the Anti-Monitor and the last monitor Nix Utoan were left unchanged but adapted to this new reality regardless of the other crisis’ and Flashpoint. They all play their roles in the universe. Batman DID kill Darkseid and his spirit was imprisoned on Earth 51 after Final Crisis and Nix let him out/resurrected him in the Multiversity Guidebook. That is how he was back in JL #1 in the beginning of the new 52.

Vanishing Point is able to access all timelines from any era of DC Comics hence how and why Brainiac is able to bottle all of his cities from different eras. When Pandora remade the Universe in Flashpoint, she did it not just on a world level like the three Crisis’ before but on a MULTIVERSAL one because she knew in essence what Metron knows in that the MULTIVERSE can NOT sustain another Crisis and that they all had to stand together if they wanted to live. I believe she knew that Brainiac was bottling the universes even though there really is no evidence to support my claim. She said the three realms of DC Comics had to be united in order to fight the oncoming threats and she was right if Convergence is any indication of how big the stakes are starting to get. But even still it has been said that her undoing of the previous universe has left this new one unstable and hence the reason why another Crisis will be it’s final undoing.

So there will forever be a debate on what is in continuity and what is out of continuity but I think what I have written above is the closest we are going to get when it comes to an actual sense of history. Personally I think that if DC wanted to do a reboot then they should have just actually hit the reset button and made what I think in their EARTH ONE line the main DC Universe and not copied, cut, and pasted whatever they did and didn’t want from the previous universe. This event while fun in some areas and just silly in others didn’t really do much for what everyone wanted in getting back things we missed permanently from the previous universe it certainly didn’t make things any less confusing when we decide to look back on what is in and out on continuity.

So in conclusion, Convergence was fun. But I don’t think it set out to do what it promised. It more made us miss the characters we missed even more. It did give us true closure but it left the door open. I guess that is what we will have to be left with.