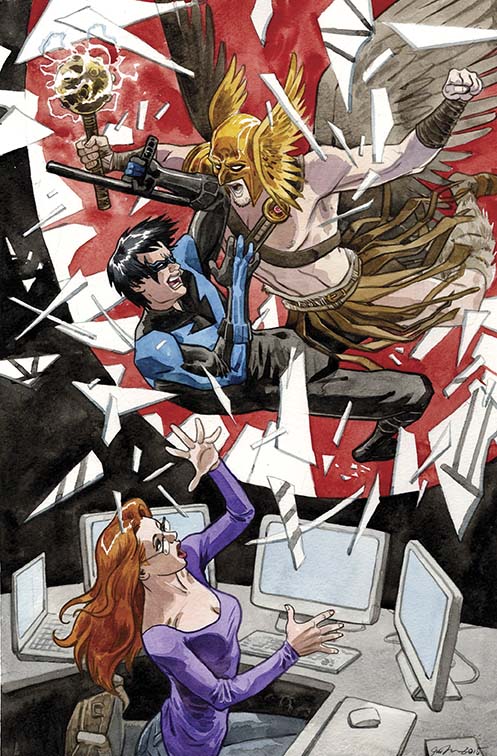 Convergence is a two-month weekly limited series, published by DC Comics, that will run from April to May 2015. Convergence spins out of the final issues of the weekly series Earth 2: World’s End and The New 52: Futures End, and contains a story which involves Brainiac trapping cities from various timelines and planets that have ended, and bringing those trapped cities (now in domes) to a planet outside of time and space. As noted before, this event will see the return of many characters from the pre-“Flashpoint” storyline of 2011 that led to creation of The New 52 Universe.

What is the story?

Set on a world outside time and space, Brainiac uses his access to Vanishing Point to roam the history of the DC Universe. He abducts heroes from different lost and obsolete eras (pre-Flashpoint, pre-Zero Hour, and pre-Crisis on Infinite Earths) and across the multiverse, in the end, amassing a collection of forty cities. Brainiac takes them to a mysterious world within domes (similar to what houses the city of Kandor from Krypton) and opens them to see what happens. The ensuing chaos pits various DC heroes and villains and their historic or multiverse counterparts against each other as a villain known as Telos rises up to take advantage of it all.

Nightwing/Oracle #1 (on sale April 8) is written by Gail Simone with art by Jan Duursema and Dan Parsons and stars the as-named heroes from the pre-Flashpoint DCU. Just as they’ve finally been reunited, the romance between Dick Grayson and Barbara Gordon is sentenced to execution by Flashpoint Hawkman and Hawkwoman! As noted by the cover, we can directly see the conflict between Hawkman and Nightwing and Oracle. And yes! Barbara Gordon is Oracle! Also of note is a red sky, which may or may not be a reference to the recurring imagery found in Flashpoint.

Thanks to DC Comics for providing TBU with two exclusive internal pages in Nightwing/Oracle #1! As you can see, both of them are similar to the oldie-but-goodie Who’s Who pages of the past, and here they trace the relationship of Dick and Babs from just ‘partners’ to a couple and back again. This first page follows the progression in their history with Barbara Gordon primarily as Batgirl. You get a No Prize if you can get them all, but from left to right the images are:

Middle: Batman Family #1 (the kiss that launched a thousand letters to the editor!)

Bottom: The Killing Joke and Nightwing #62 (The Last Laugh) This second page follows the time of Barbara Gordon as Oracle, and the Dick and Babs relationship certainly has some ups and downs during this era. Ready for your second No Prize? From left to right the images are:

Top: Birds of Prey #8 (perhaps one of my all-time favorite issues); Nightwing #53 (Officer Down Part 5); and Nightwing #88 (after a fire broke out at the circus; they are NOT together at this time)

What have we learned?

First and foremost, from all this we can definitely see that someone has done his/her homework! What we have here are some of the most prominent and even obscure moments in the history of Dick/Babs. Just look at all the titles that were covered! We can also see that Simone seems intent on yes, writing Babs as Oracle, but also with an eye trained on Babs’ past as Batgirl. There is so much history with this couple that it is absolutely necessary to keep in mind pre- and post-Killing Joke interactions.

As you well know, Convergence does make me anxious, because I feel like it is dangerous for my heart to feel for this version of the characters again. But if you are going to do a Dick/Babs shippertastic story, this is the way to go, and I am looking forward to seeing how the relationship translates to life under the mysterious Dome. Dick/Babs is my OTP (one true pair) and these two preview images certainly excite me!