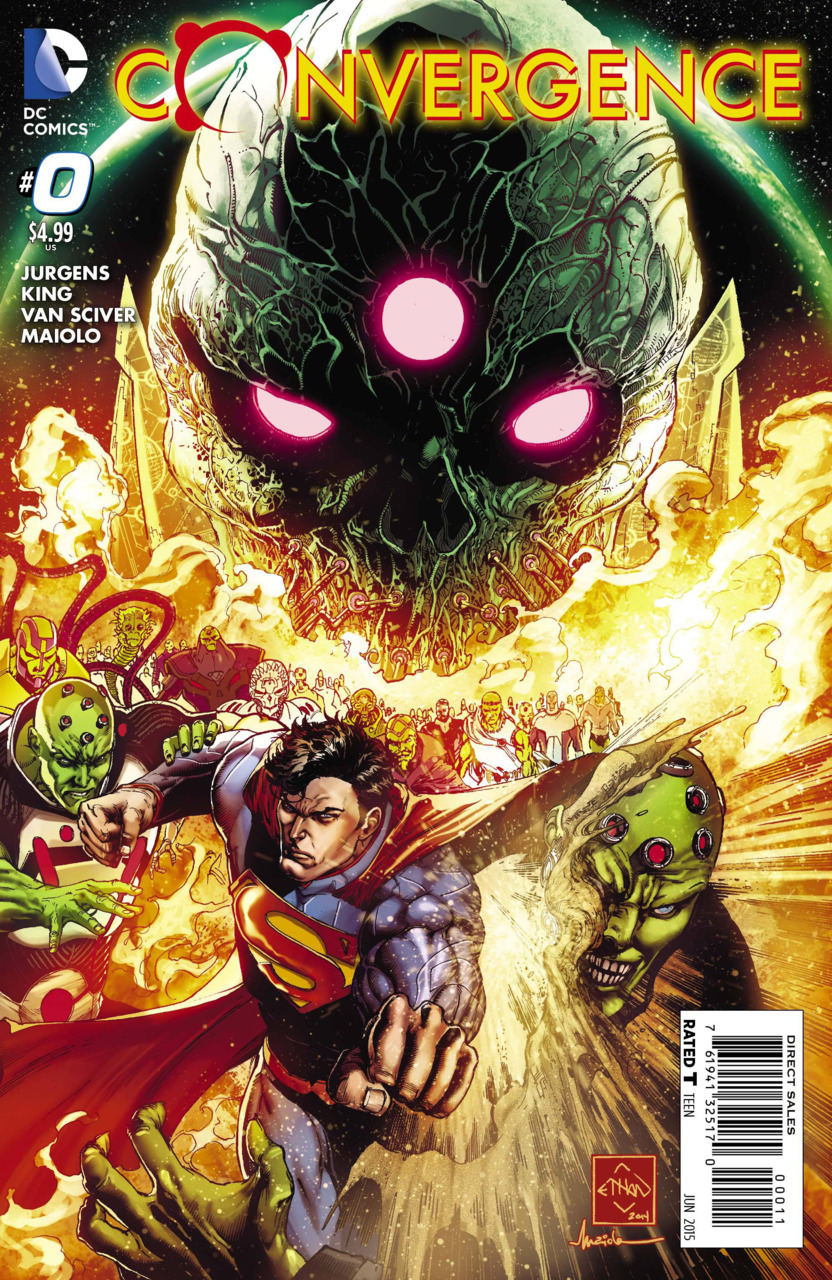 The Blood Moon has finally risen. Spinning out of the end of Doomed, Superman of New Earth has been abducted and knocked unconscious after sending him and Vril Dox into a black hole.  When he wakes up he remembers what happened at the end of that story and is greeted by the very same Brainiac as we encountered in the forty-eight issue Future’s End series. When he demands to know where they are Brainiac explains to him that it is not where they are, but when. Brainiac then shows him in a stunning piece of art at every point in the history of the multiverse that Superman has died while explaining to him that no matter the timeline he must be taken care of and that he knows of Kal-El’s earth and that is where he will then head to next and he disappears.  Superman is then deposited onto the Blood Moon after breaking free of the prison that Brainiac put him in for holding and he comes face to face with many different iterations of the kryptonian technology ranging from oldest to newest and even one from the DC animated universe.

We slowly find out that the many cities being held under domes on the planet have been plucked out of time at specific points in which each respective world was about to be destroyed. It is explained the fact these heroes have stood in the face of death and defied it, fascinates him and that is why he has gathered them all on the Blood Moon in the first place. As Superman begins to try to fight off all the different iterations of Brainiac it is revealed that they have all coalesced into the one sentient being of Telos, son of Brainiac. He has been abandoned by his father Brainiac (we see why in Futures End) without a purpose. Superman desperately tries to fight him to not only save the other prisoners of the planet but also to get back to New Earth.

As Superman rebuffs Telos on his offer to give Superman his own city the sentience them ejects him from the planet as Brainiac has not yet returned with New Earth and he has no place on the planet and he wipes Clark’s mind until it is the right time for him to remember his encounter there. Telos then decides that he will pit the different domes against each other and he will make the perfect earth with the victors being allowed to return to the universe presumably created in his father’s image.

This was a great set up to the 30th Anniversary arc of Crisis On Infinite Earths. You can definitely tell that they are looking to knock this story out of the park and it may be even to the detriment of the weekly stories that came before it as they specifically set up this event. I am glad they took the time to explain why Superman didn’t recognize Brainiac when he showed back up in Future’s End and even went so far as to give him the beginning of that lumberjack’s beard he had in the series. I am licking my chops for this series as I am such a big fan of DC Comics and relish in it’s history. Thankfully I wont have to wait long not only to read this story but to also get what is hopefully a satisfying conclusion in the next eight weeks of exciting comics.