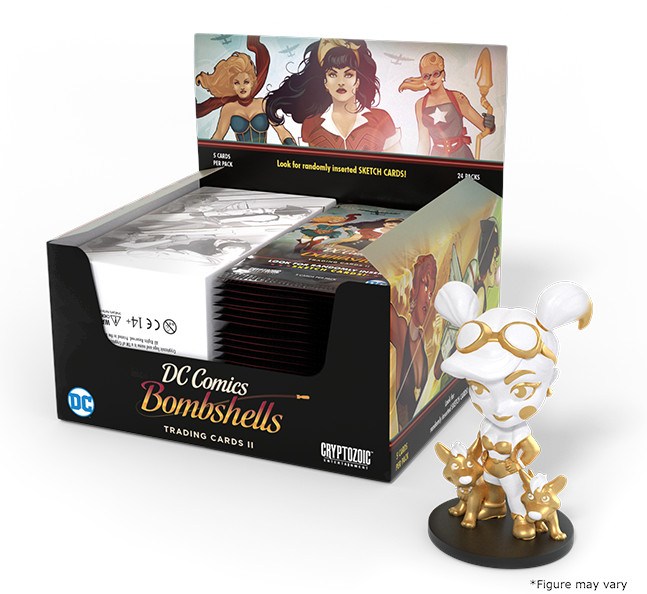 I’ve been reporting to all you Bat-Fans that DC Bombshells is the unexpected runaway hit that just keeps on giving back to the fans.  Well, this should help show how strongly it is still going. Cryptozoic and Warner Bros. just announced the second series of trading cards based on DC Bombshells.

This second series will feature a base set with art from the Sketch Cards of the previous release, four Chase Sets, and randomly inserted one-of-a-kind Sketch Cards.  Each whole box will contain one rare Golden Goddess or Golden God variant of a Series 3 DC Lil Bombshells 2.75-inch vinyl figure: Harley Quinn, Superman, The Joker, Raven, or Starfire. Some boxes will contain a rare Bronze variant of one of the figures. The Chase Sets are: “New Bombshells Covers” inspired by cover art from the comics; “Terrific Twosome!” which uses comic art to spotlight couples and iconic pairings; “Batgirls,” which repurposes sketch art from the previous set to highlight the Batgirls team from the comics; and “Lil Golden Goddess/God Art,” showcasing the production sketches used to help create the Lil Golden Goddess and God figures.

In addition to the figures in each box, there will also be randomly inserted cards in packs: foil variants, exclusive sketch cards, Printing Plates, and CZ STR PWR, which are rare, high-quality, thicker cards printed using Cast and Cure technology. Believe me, these look amazing and collectors will be well-rewarded for buying an entire box of the cards. DC Bombshells Trading Cards II will be available at retailers nationwide on October 17.