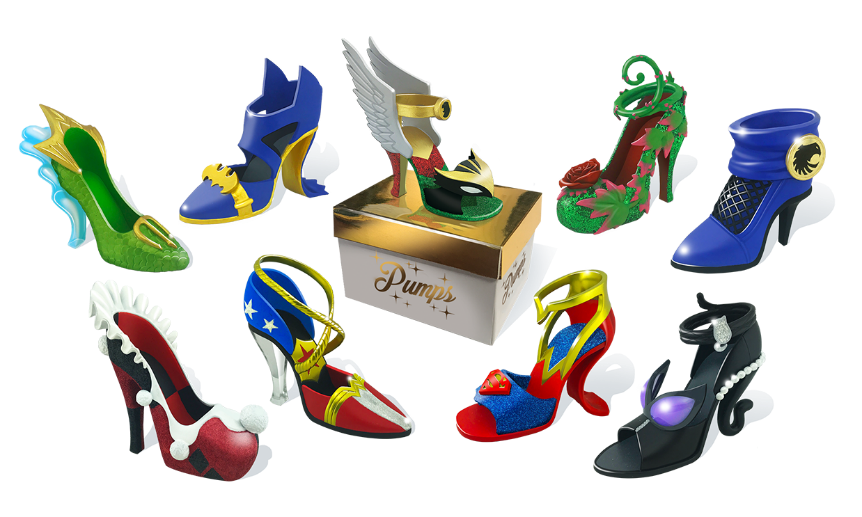 Cryptozoic has announced that they will be showing off a number of new lines of collectibles at the 2017 Fall Toy Preview in early October. Among the offerings are two lines that specifically deal with The Batman Universe. Both are unique takes on characters with one being tiki versions of characters and the other being related to shoes. Both lines are expected to release in late 2017-early 2018. Take a look at the details below.

DC Teekeez are 2.75-inch vinyl figures that feature a distinctive wood-carved aesthetic inspired by tiki culture and iconic DC characters. The five figures include Batman, Superman, Wonder Woman, The Joker, and Harley Quinn, with each figure packaged inside a display-worthy window box. Designed by Mark Doublin and sculpted by Stephan Ehl, the figures are stackable, allowing collectors to create impressive displays. DC Pumps are vinyl figures of miniature high-heeled shoes inspired by the costumes, props, and personalities of DC’s favorite female Super Heroes and Super-Villains, including Wonder Woman, Harley Quinn, and Supergirl. Each shoe is approximately 2.25 inches tall, finished with high quality paint, and packaged inside a blind-reveal, high-fashion-style shoebox. There are nine distinct vinyl figures in the DC Pumps collection, plus two rare variants and one ultra rare variant.