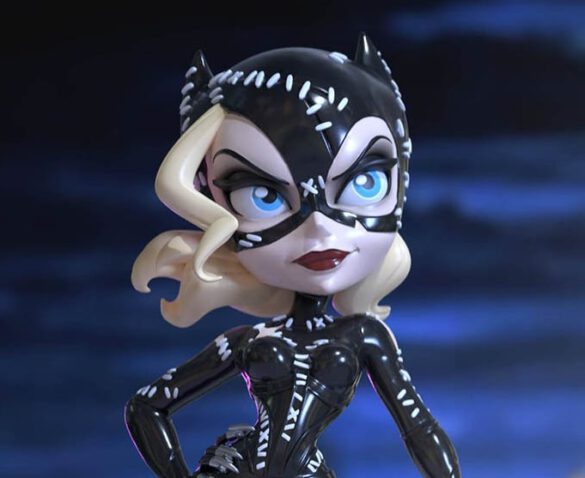 Cryptozoic Entertainment has released details for a new collectible based on Michelle Pfeiffer’s Catwoman from the Batman Returns. The vinyl figure measures about eight inches tall. The figure will also be available in two limited variants. The Noir Edition is black and white, except for Selina’s eyes and lips, which is priced at $29.99. The “Hello There” Edition features her outfit in purple, is priced at $34.99. Both will have limited pieces available with the “Hello There” edition being limited to only seven hundred and fifty pieces. The regular figure is priced at $29.99 and is expected to ship in March 2021. You can preorder the figure at Cryptozoic now. More details will be released in the future for the limited edition figures.

Meow. The version of Catwoman in Batman Returns has captivated audiences for over 25 years. This 7.5-inch vinyl figure captures all the personality and details, including her iconic whip, that have made the femme fatale so unforgettable. Designed by Pedro Astudillo and sculpted by Anders Ehrenborg, it comes packaged inside a display-worthy window box.